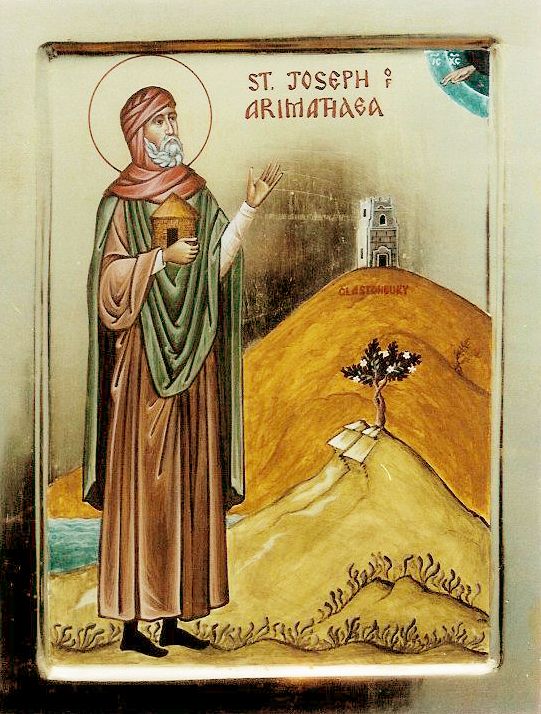 Merciful God, whose servant Joseph of Arimathaea with reverence And godly fear did prepare the body of our Lord and Savior for burial, and did lay it in his own tomb: Grant, we beseech thee, to us thy faithful people grace and courage to love and serve Jesus with sincere devotion all the days of our life; through the same Jesus Christ our Lord, who liveth and reigneth with thee and the Holy Spirit, one God, for ever and ever. 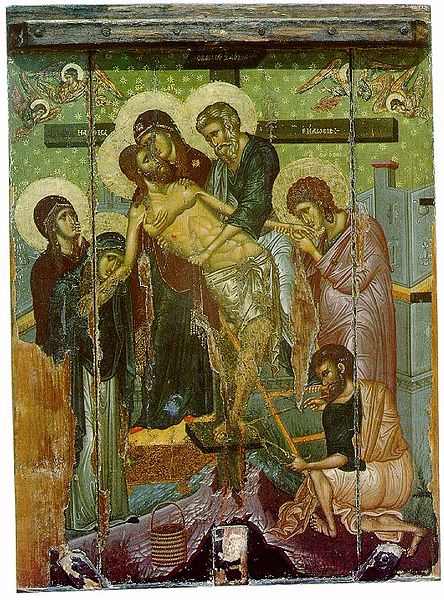 IMAGE ABOVE: 14th century Byzantine Icon of the Descent from the Cross from the Church of Saint Marina in Kalopanagiotis, Cyprus. Saint Joseph of Arimathea is the figure standing in the center, in blue-green robes holding the Body of Christ.

About Saint Joseph of Aarimathea

It is said that Joseph... derived his wealth from tin mines in Cornwall, which he visited from time to time.

After the Crucifixion, we are told, Joseph returned to Cornwall, bringing the chalice of the Last Supper, known as the Holy Grail. Reaching Glastonbury, he planted his staff, which took root and blossomed into a thorn tree. The Grail was hidden, and part of the great national epic ("the matter of Britain") deals with the unsuccessful quest of the knights of King Arthur to find the Grail. The Thorn Tree remained at Glastonbury, flowering every year on Christmas day, and King Charles I baited the Roman Catholic chaplain of his queen by pointing out that, although Pope Gregory had proclaimed a reform of the calendar, the Glastonbury Thorn ignored the Pope's decree and continued to blossom on Christmas Day according to the Old Calendar. The Thorn was cut down by one of Cromwell's soldiers on the grounds that it was a relic of superstition, and it is said that as it fell, its thorns blinded the axeman in one eye. A tree allegedly grown from a cutting from the original Thorn survives today in Glastonbury (and trees propagated from it stand on the grounds of the Cathedral in Washington, DC, and presumably elsewhere) and leaves from it are sold in all the tourist shops in Glastonbury.

Tin, an essential ingredient of bronze, was highly valued in ancient times, and Phoenician ships imported tin from Cornwall. It is a pretty safe guess that in the first century the investors who owned shares in the Cornwall tin trade included at least a few Jewish Christians.

Christianity gained a foothold in Britain very early, probably earlier than in Gaul. It may have been brought there by the traffic of the Cornwall tin trade. The early British Christians have a tradition that they had been evangelised by a wealthy Jewish Christian... "We were evangelised by Joseph of Arimathaea."