Defender of the Oppressed 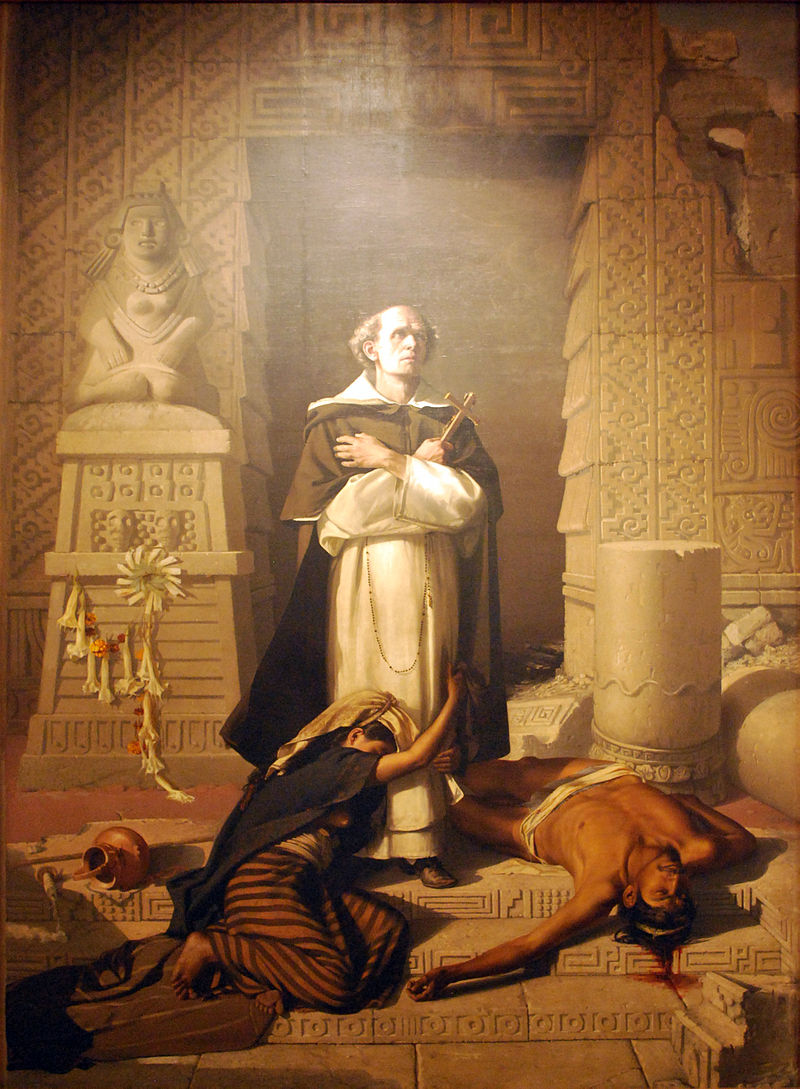 on display at the Museo Nacional de Arte in Mexico City

Bartolome de Las Casas was born in Seville, Spain, in 1474. In 1502 he went to Cuba, and for his military services there was given an Encomienda, an estate that included the services of the Indians living on it. In about 1513 he was ordained priest (probably the first ordination in the Americas), and in 1514 he renounced all claim on his Indian serfs. During the following seven years he made several voyages to Spain to find support for a series of new towns in which Spaniard and Indian would live together in peace and equality. In 1523 he became a Dominican friar and disappeared for a time from public controversy. In 1540 he returned to Spain and was a force behind the passage in 1542 of laws prohibiting Indian slavery and safeguarding the rights of the Indians. He was made Bishop of Chiapas in Guatemala, and returned to the Americas in 1544 to implement the new laws, but he met considerable resistance, and in 1547 he returned to Spain, where he devoted the rest of his life to speaking and writing on behalf of the Indians. He is chiefly remembered for his Brief Report On the Destruction of the Indians (or Tears of the Indians), a fervid and perhaps exaggerated account of the atrocities of the Spanish conquerors against the Indians. The book was widely read and widely translated, and the English version was used to stir up English feeling against the Spanish as a cruel race whom England ought to beware of, and whose colonies in the Americas would be better off in English hands. Las Casas is widely admired as an early pioneer of social justice, and widely denounced as an irresponsible pamphleteer and spreader of slanders. He died in Madrid on 17 July (or perhaps 31 July) 1566, and is remembered as a national hero in Cuba and Nicaragua. An extract from Tears of the Indians follows.

Now Christ wanted his gospel to be preached with enticements, Gentleness, and all meekness, and pagans to be led to the truth not by armed forces but by holy examples, Christian conduct, and the word of God, so that no opportunity would be offered for blaspheming the sacred name or hating the true religion because of the conduct of the preachers. For this is nothing else than making the coming and passion of Christ useless, as long as the truth of the gospel is hated before it is either understood or heard, or as long as innumerable human beings are slaughtered in a war waged on the pretext of preaching the gospel and speading religion.

With Las Casas we may remember Bartolomeo de Olmedo, priest and friar of Mercy, who was chaplain of Cortez's expedition to Mexico City, and who appears in the records of that expedition as a moderating force, denouncing atrocities and conquest, talking Cortez out of forcibly destroying idol temples, telling him instead to set the Indians an example of Christian love, and wait for them to destroy the idols by their own decision. (Some readers will remember him from Samuel Shellabarger's historical novel, Captain From Castille.) According to the Britannica article on pre-Columbian American cultures (see vol. 26 p. 25 of the 15th edition), the clergy accompanying the Spanish conquistadors were consistently more disposed than the commanders to respect the native civilizations and undertake to preserve their records, and whatever aspects of native culture were not clearly inconsistent with Christianity.

From the beginning, the missionary priests in Spanish America showed concern for the welfare of the Indians. On Christmas Day in 1511, in Hispaniola, the Dominican Antonio de Montesimos preached, saying, "By what right or justice do you keep the Indians in such horrible servitude? Are they not men? Have they not rational souls? Are you not bound to love them as you love yourselves?"

The government policy was to establish towns for the Indians, and these were normally built in connection with mission posts. The Indians seem to have taken to the mission civilization with enthusiasm. In particular, they were great lovers of music, and found plainchant much to their taste. The first Bishop of Mexico, Juan de Zumarraga, said, "I find that more are converted by music than by any other method." They were also impressed by the asceticism of the friars. A prominent idea in the native religions had been that holiness was associated with bearing pain in the service of the gods, and when they met missionaries like the Franciscan Antonio de Roa, who went barefoot and slept on boards, wore only a coarse sackcloth robe, ate no meat or wine, and scourged himself every time he saw a crucifix, they concluded that he must be a man of God, and listened eagerly to his preaching.

It seems clear that the Indians for the most part regarded the missionaries as their benefactors, and gave them a loyalty which was not simply fear of the secular authority that backed them up. This is shown when the secular authority did not back them. In 1769, when the Spanish Crown adopted an anti-Jesuit policy, the Jesuits were deported from Mexico. Mobs of angry Indians attempted to break into the barracks where they were held, and a large military escort was necessary to conduct them to Vera Cruz and the waiting ships. Again, in 1799, in Pueblo, a large Indian crowd attacked a jail in which a priest had been imprisoned.

For about three centuries, from the early 1500's to the early 1800's, the people of Mexico were obedient to the Spanish Crown because their clergy were. But when the Crown broke with the clergy in the early 1800's the priests began to preach independence, and the people followed their lead, and Mexico and the rest of Spanish America became independent.

A great many converts were brought in by the Cloak of Guadalupe. An Indian Christian reported that the Virgin Mary had appeared to him and sent him to see the bishop; and as a sign that the appearance was genuine, she filled his cloak with roses although it was winter, and printed on the cloak a picture of herself, portrayed in the Indian style of art, as a woman treading a serpent, and with some details that made no particular sense to a European. Many Indians came to see the cloak (which is still on display in the Cathedral in Mexico City), and were converted by the sight. It seems that some of the details are significant in terms of American Indian culture, and were understood by the Indians to mean that Christianity is the fulfilment of their prophecies and expectations.

Many persons today think of the Indians of Mexico as a free and happy people who were conquered and enslaved by the Spanish. It must be remembered that before the coming of the Europeans, the Aztecs with their capital at what is now Mexico City had conquered the surrounding tribes for hundreds of miles in all directions, and required of them every year a tribute of young men and women to be sacrificed in the temples at Mexico City. The subjugated tribes did not like this, and gladly assisted Cortes in his campaign against the Aztecs. Even when he suffered temporary defeats, the loyalty of his Indian auxiliaries never wavered, and his rule, once he had established himself, was considered far less harsh than that of the Aztecs had been. The Britannica article on Cortes speaks of "his acceptance by the Indians and his popularity as a relatively benign ruler."

When the European conquest of the Americas is being deplored, the accompanying high death rate among the natives is often mentioned. It ought to be remembered that most of these deaths were due to smallpox. The disease was brought to the Americas by one sick sailor, and triggered a series of major epidemics. The Indians had no previous exposure to it and almost no resistance to it, and most cases were fatal. Moreover, the Indians habitually treated their sick by baths, and the water was used by many bathers. One bather with an open sore was enough to infect all who shared the same bath. Whenever two populations long separated come into significant contact, each of them is at risk from diseases against which they are defenseless. The smallpox epidemic would have run about the same course if the ships of Columbus had been loaded with social workers and Peace Corps volunteers. One can denounce the Europeans for the smallpox epidemic only by being prepared to say that there ought never to be contact between two populations that have previously been isolated from each other.

A bibliography for Las Casas appears in Festivals and Commemorations, (Augsburg Publishing House, Minneapolis, 1980). For a less favorable evaluation of him, see Cortes, by Richard Lee Marks (Ny: Knopf, 1993).

Let thy continual mercy, O Lord, enkindle in thy Church the Never-failing gift of charity, that, following the example of thy servants Bartolome de Las Casas and Bartolomeo de Olmedo, we may have grace to defend the children of the poor, and maintain the cause of those who have no helper; for the sake of him who gave his life for us, thy Son our Savior Jesus Christ, who liveth and reigneth with thee and the Holy Ghost, one God, now and for ever.