> Commemoration: Bertha and Ethelbert of Kent

Bertha and Ethelbert of Kent

Queen and King of Kent, 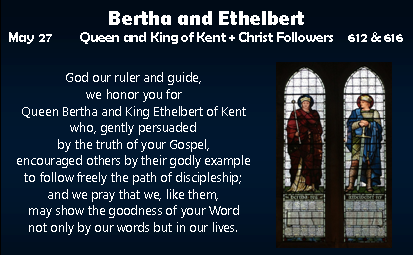 God our ruler and guide, we honor you for Queen Bertha and King Ethelbert of Kent who, gently persuaded by the truth of your Gospel, encouraged others by their godly example to follow freely the path of discipleship; and we pray that we, like them, may show the goodness of your Word not only by our words but in our lives; through Jesus Christ, who with you and the Holy Spirit lives andreigns, one God, in glory everlasting. Amen.

century, but in the fifth century the southeast was invaded by pagan

Anglo-Saxons who drove the Celts north and west into Scotland,

Ireland, and Wales. Ethelbert succeeded his father as Saxon king of

Kent in 560. He was, according to the Venerable Bede, a fair ruler and

the first English King to promulgate a code of law. Brisk cross-channel

trade with France exposed Ethelbert to Roman customs and luxuries.

Christian princess, Bertha. Although not a Christian himself, Ethelbert

promised Bertha’s father that she could practice her faith. Good to his

word, he welcomed her chaplain and granted him an old Christian

mausoleum to convert into the Church of St. Martin, which still stands

In 597, the Roman mission to England under Augustine arrived. When

he first heard the Gospel, Ethelbert was cautious and unconvinced.

However, his fair-mindedness and hospitality were evident in his

welcome to Augustine: “The words and promises you bring are fair

enough, but because they are new to us and doubtful, I cannot accept

have held so long. But as you have come on a long pilgrimage and are

anxious, I perceive, to share with us things which you believe are true

and good, we do not wish to do you harm; on the contrary, we receive

you hospitably and provide what is necessary for your support; nor

The following Pentecost, Ethelbert was baptized, becoming the first

Christian King in England. Though he helped the missionaries and

including Canterbury Cathedral, he never coerced his people, or even

his children, into conversion. Bertha’s kind and charitable nature and

Ethelbert’s respect for law and the dignity of individual conscience

represent, to this day, some of the best of the English Christian spirit.