Priest and Monk of Jarrow, 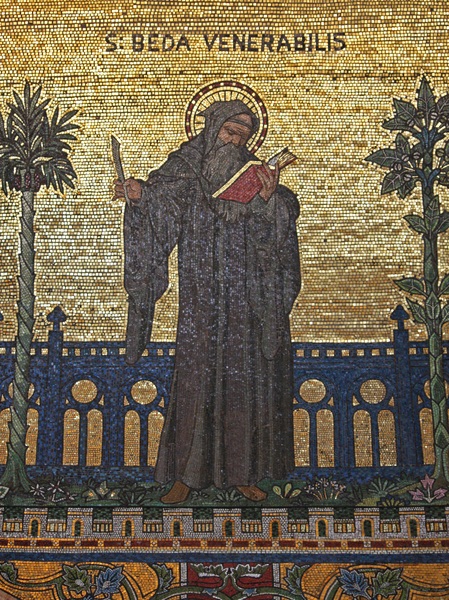 Heavenly Father, who didst call thy servant Bede, while still a Child, to devote his life to thy service in the disciplines of religion and scholarship: Grant that as he labored in the Spirit to bring the riches of thy truth to his generation, so we, in our various vocations, may strive to make thee known in all the world; through Jesus Christ our Lord, who liveth and reigneth with thee and the Holy Spirit, one God, for ever and ever.

A Hymn written by St. Bede

A hymn of glory let us sing;

New songs throughout the world shall ring:

Christ, by a road before untrod,

Now rises to the throne of God.

Upon the Mount of Olives stand;

And with his followers they see

To them the angels drawing nigh,

"Why stand and gaze upon the sky?

This is the Savior," thus they say;

"This is his glorious triumph day.

"Again shall ye behold him so

As ye today have seen him go,

Up to the portals of the sky."

All praise to thee let earth accord,

Who art, while endless ages run,

With Father and with Spirit one.

At the age of seven, Bede’s parents brought him to the nearby

monastery at Jarrow (near Durham in northeast England) for his

education. There, as he later wrote, “spending all the remaining time

of my life ... I wholly applied myself to the study of Scripture, and

amidst the observance of regular discipline, and the daily care of

singing in the church, I always took delight in learning, teaching, and

Bede was ordained deacon at nineteen, and presbyter at thirty. He died

the Gospel according to John. About 1020 his body was removed to

Durham, and placed in the Galilee, the Lady Chapel at the west end of

Bede was the greatest scholar of his time in the Western Church.

He wrote commentaries on the Scriptures based on patristic

interpretations. His treatise on chronology was standard for a long

time. He also wrote on orthography, poetic meter, and especially

on history. His most famous work, The Ecclesiastical History of

England, written in Latin, remains the primary source for the period

597 to 731, when Anglo-Saxon culture developed and Christianity

triumphed. In this work, Bede was clearly ahead of his time. He

consulted many documents, carefully evaluated their reliability, and

cited his sources. His interpretations were balanced and judicious. He

also wrote the History of the Abbots (of Wearmouth and Jarrow), and

a notable biography of Cuthbert, both in prose and verse.

His character shines through his work—an exemplary monk, an

ardent Christian, devoted scholar, and a man of pure and winsome

manners. He received the unusual title of Venerable more than a

century after his death. According to one legend, the monk writing the

inscription for his tomb was at a loss for a word to fill out the couplet:

(This grave contains the— blank—Bede’s remains)

That night an angel filled in the blank: Venerabilis.

Click the link below to learn more about St. Bede: