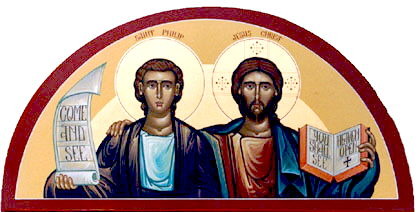 Almighty God, who gave to your apostles Philip and James grace And strength to bear witness to the truth: Grant that we, being mindful of their victory of faith, may glorify in life and death the Name of our Lord Jesus Christ; who lives and reigns with you and the Holy Spirit, one God, now and for ever. Amen.

The two apostles commemorated on this day are among those about

whom little is known, except for their mention in the Gospels. James

and from James “the brother of the Lord,” or perhaps to indicate

youth or lack of stature. He is known to us from the list of the Twelve,

where he is called James the son of Alpheus. He may also be the

person referred to in Mark’s Gospel as James the younger, who, with

his mother Mary and the other women, watched the crucifixion from

Philip figures in several important incidents in Jesus’ ministry as

reported in John’s Gospel. There we read that Jesus called Philip

soon after calling Andrew and Peter. Philip, in turn, found his friend

Nathanael, and convinced him to come and see Jesus, the Messiah.

Later, when Jesus saw the hungry crowd, he asked Philip, “How are

bread for each of them to get a little” (John 6:7), was the prelude

to the feeding of the multitude with the loaves and fishes. In a later

incident in John’s Gospel, some Greeks came to Philip asking to see

Jesus. At the Last Supper, Philip’s request, “Lord, show us the Father,

and we shall be satisfied,” evokes the response, “Have I been with you

so long, and yet you do not know me, Philip? He who has seen me has