Set us free, heavenly Father, from every bond of prejudice and Fear: that, honoring the steadfast courage of your servants Absalom Jones and Richard Allen, we may show forth in our lives the reconciling love and true freedom of the children of God, which you have given us in our Saviour Jesus Christ, who lives and reigns with you and the Holy Spirit, one God, now and for ever. Amen. 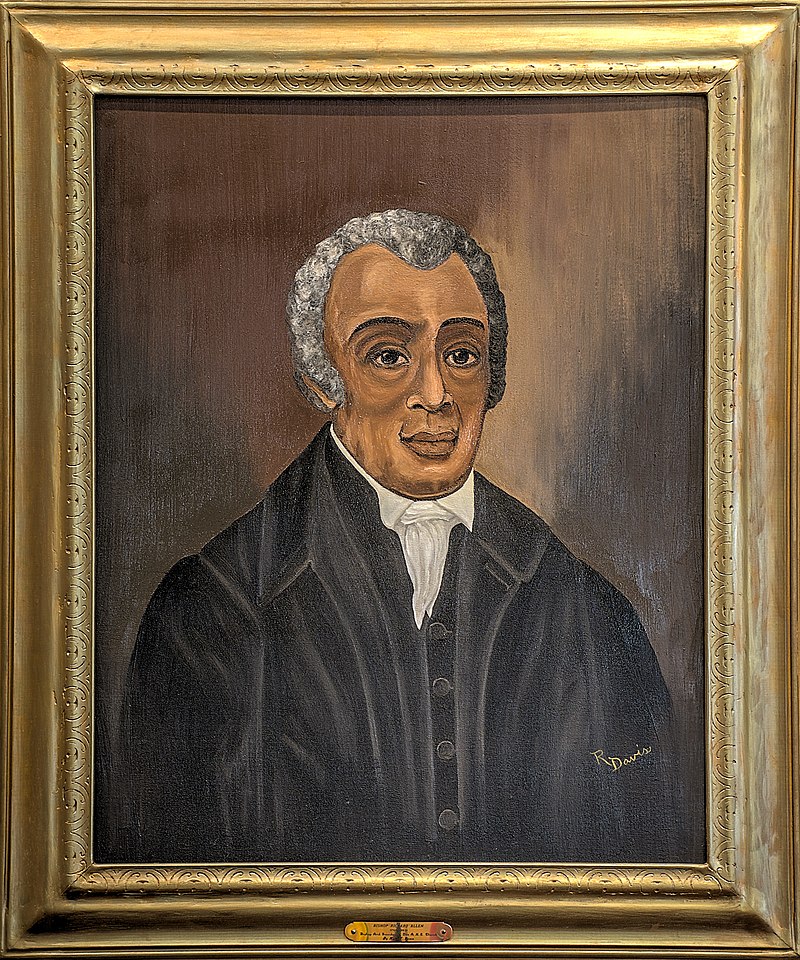 From the Society of Archbishop Justus [1]:

In 1786 the membership of St. George's Methodist Episcopal Church in Philadelphia included both blacks and whites. However, the white members met that year and decided that thereafter black members should sit only in the balcony. Two black Sunday worshippers, Absalom Jones (1746-1818) and Richard Allen (1760-1831), whose enthusiasm for the Methodist Church had brought many blacks into the congregation, learned of the decision only when, on the following Sunday, ushers tapped them on the shoulder during the opening prayers, and demanded that they move to the balcony without waiting for the end of the prayer. They walked out, followed by the other black members.

Absalom Jones conferred with William White, Episcopal Bishop of Philadelphia, who agreed to accept the group as an Episcopal parish. Jones would serve as lay reader, and, after a period of study, would be ordained and serve as rector. Allen wanted the group to remain Methodist, and in 1793 he left to form a Methodist congregation. In 1816 he left the Methodists to form a new denomination, the African Methodist Episcopal Church (Ame). Jones (ordained deacon and priest in 1795 and 1802) and Allen (ordained deacon and elder in 1799 and 1816) were the first two black Americans to receive formal ordination in any denomination.

Absalom Jones was born a house slave in 1746 in Delaware. He taught himself to read out of the New Testament, among other books. When sixteen, he was sold to a store owner in Philadelphia. There he attended a night school for Blacks, operated by Quakers. At twenty, he married another slave, and purchased her freedom with his earnings.

Jones bought his own freedom in 1784. At St. George’s Methodist Episcopal Church, he served as lay minister for its Black membership. The active evangelism of Jones and that of his friend, Richard Allen, greatly increased Black membership at St. George’s. The alarmed vestry decided to segregate Blacks into an upstairs gallery, without notifying them. During a Sunday service when ushers attempted to remove them, the Blacks indignantly walked out in a body.

In 1787, Black Christians organized the Free African Society, the first organized Afro-American society, and Absalom Jones and Richard Allen were elected overseers. Members of the Society paid monthly dues for the benefit of those in need. The Society established communication with similar Black groups in other cities. In 1792, the Society began to build a church, which was dedicated on July 17, 1794.

The African Church applied for membership in the Episcopal Diocese of Pennsylvania on the following conditions: 1, that they be received as an organized body; 2, that they have control over their local affairs; 3, that Absalom Jones be licensed as layreader, and, if qualified, be ordained as minister. In October 1794 it was admitted as St. Thomas African Episcopal Church. Bishop White ordained Jones as deacon in 1795 and as priest on September 21, 1802.

Jones was an earnest preacher. He denounced slavery, and warned the oppressors to “clean their hands of slaves.” To him, God was the Father, who always acted on “behalf of the oppressed and distressed.” But it was his constant visiting and mild manner that made him beloved by his own flock and by the community. St. Thomas Church grew to over 500 members during its first year. Known as “the Black Bishop of the Episcopal Church,” Jones was an example of persistent faith in God and in the Church as God’s instrument.