Charles I of England and Scotland,

Portrait from the studio of Anthony van Dyck, 1636

Blessed Lord, in whose sight the death of thy saints is Precious: We magnify thy name for thine abundant grace bestowed upon thy servant Charles, king and martyr; by which he was enabled so cheerfully to follow the steps of his blessed Master and Savior in a constant meek suffering of all barbarous indignities, and at last resisting unto blood, and even then, according to the same pattern, praying for his murderers. Let his memory, O Lord, be ever blessed among us, that we may follow the example of his courage and constancy and great charity; for Jesus Christ's sake, our only Mediator and Advocate. Amen. 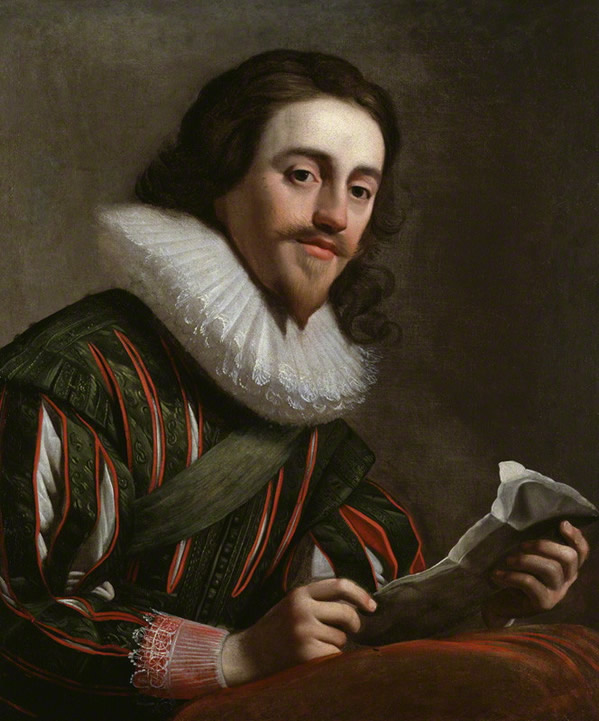 Royal Charles, who chose to die

Rather than the Faith deny,

For the sake of Jesu’s Bride;

Of the Church’s holy way;

All the way of death he trod

For the glory of his God,

And his dying dignity

Made a bright Epiphany;

Bless we God the Three in One,

For all faithful ’neath the sun,

For the faithful gone before,

And for those our country bore,

Chiefly him whose praise we sing,

Charles was born in 1600, son of James VI of Scotland (who upon the death of Queen Elizabeth in 1603 became James I of England as well). In 1625 he became king of England and Scotland, although the governments of the two countries continued to be independent until the time of Queen Anne. Most of his reign was devoted to a struggle with the House of Commons of the English Parliament, a struggle that erupted into civil war and ended with the beheading of the king for treason by order of Parliament.

A war which was, in one sense, about taxation, was in another sense about religion. The Parliamentary armies were led by Oliver Cromwell (a collateral descendant of Henry VIII's advisor Thomas Cromwell), a staunch Puritan and a military genius. He began by opposing Charles in the name of liberty, but since it soon became clear that Cromwell himself was no friend to liberty, his battle cry became the Puritan faith. Wherever his troops went, they smashed stained-glass windows and pictures and statues, stabled their horses in churches, and burned vestments and Prayer Books. [A correspondent from Ely informs me that this practice was not universal. For example, Cromwell ordered his soldiers not to vandalize Ely Cathedral.] At the end, when Charles was Cromwell's prisoner, he was required to assent to a law abolishing bishops in the Church of England. He had previously given his consent to such an abolition in Scotland, where the Puritans were in the majority, but here he dug in his heels and declared that Bishops were part of the Church as God had established it, and that he could not in conscience assent to Cromwell's demand. His refusal sealed his doom, and it is for this that he is accounted a martyr, since he could have saved his life by giving in on this question. He was brought to trial before Parliament, found guilty of treason, and beheaded 30 January 1649. On the scaffold, he said (I quote from memory and may not have the exact words):

No man in England is a better friend to liberty than myself, But I must tell you plainly that the liberty of subjects consists not in having a hand in the government, but in having that government, and those laws, whereby their lives and their goods may be most their own.

That is to say, one may reasonably ask of a government that it establish justice in the land; so that judges do not take bribes, so that innocent men are not convicted of crimes, while the guilty are convicted and punished, so that honest men need fear neither robbers nor the sheriff. One may further ask that taxes be not excessive, and that punishments be not disproportionate to the crime. Charles would have said, "Do not ask whether the laws were made by men whom you elected. Ask whether they are reasonable and good laws, upholding justice and the public weal." He would have invited comparison of his record in this respect with that of the Long Parliament (which sat for twenty years without an election, and whose members came to think of themselves as rulers for life, accountable to no one) and Cromwell (who eventually dissolved Parliament and ruled as a military dictator, under whose rule the ordinary Englishman had far less liberty than under Charles).

In his struggle with his opponents, Charles considered himself to be contending for two things:

(1) the good of the realm and the liberty and well-being of the people, which he believed would be better served by the monarch ruling according to ancient precedent, maintaining the traditional rights of the people as enshrined in the common law, than by a Parliament that ended up denying that it was either bound by the law or accountable to the people; and

In his Declaration at Newport, in the last year of his life, he said:

I conceive that Episcopal government is most consonant to the Word of God, and of an apostolical institution, as it appears by the Scripture, to have been practised by the Apostles themselves, and by them committed and derived to particular persons as their substitutes or successors therein and hath ever since to these last times been exercised by Bishops in all the Churches of Christ, and therefore I cannot in conscience consent to abolish the said government.

In a day when religious toleration was not widespread, King Charles I was noteworthy for his reluctance to engage in religious persecution of any kind, whether against Romanists or Anabaptists.

His attitude toward accusations of witchcraft is noteworthy. His father, King James I, had written a book on witchcraft, and considered himself an expert on the subject. Under his reign, persecutions of witches were frequent. Public hysteria brought many suspects to the stake. It was Charles's practice to have women accused of witchcraft brought before him, and in most cases, he concluded that they were old and sick or wandering in their wits, and he gave them money and sent them home.

Charles was never a Roman Catholic, and firmly refused all urgings to become one, saying that he believed the Church of England to be more truly Catholic than the Church of Rome. However, there were many Roman Catholics in his family. His mother, Anne of Denmark, had converted to Rome. His own wife, Henrietta Maria, a French princess whom he had married in what was originally a political alliance but ended as a love match, was a Roman Catholic. His oldest son Charles became a Roman on his deathbed, and his second son, later James II, became one while still healthy, and lost his throne on account of it. It was accordingly not surprising that the Puritans accused him of being secretly disposed toward Rome, and that they regarded all his moves toward religious toleration as part of a Roman Catholic plan to seize the government. 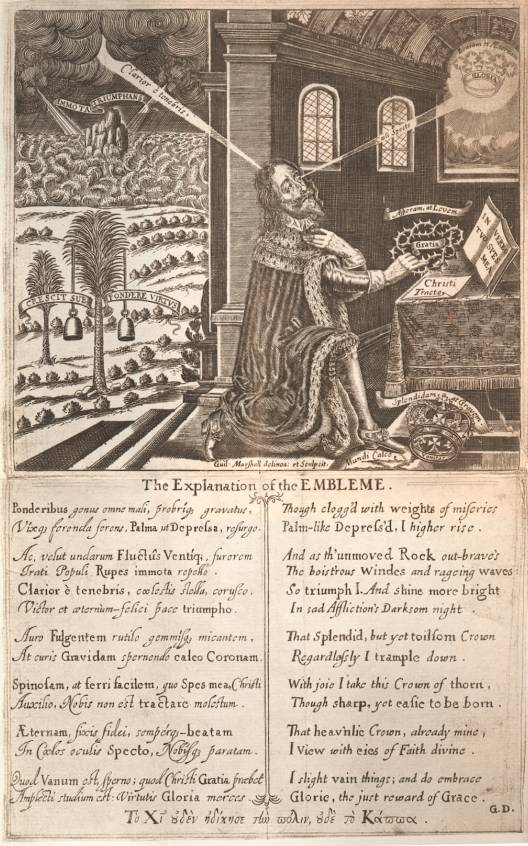 From a sermon by Ronald A Knox:

We are met, dearly beloved, to celebrate the festival of Charles, King and Martyr, who laid down his life in defence of our most holy religion in the year of grace sixteen hundred and forty-nine. Discrowned by his people, we dare not doubt that he has been crowned in heaven.... [We honor him] because he lived a life of personal holiness and devotion unexampled among the princes of his age.... We venerate him also as a martyr, because he might at the last have saved his life if he had been content to lose it by helping to destroy the order of Apostolic succession handed down to us from Augustine [first Archbishop of Canterbury]. We do not thereby necessarily assent to the policy he pursued while yet on the throne, a policy which to him, thinking with the mind of his times, seemed the only possible one for the maintainance of religion in England. It is not the Court of Star Chamber or of High Commission which we commemorate today; it is the sentence, the axe, and the block, and the royal blood staining the January snow. 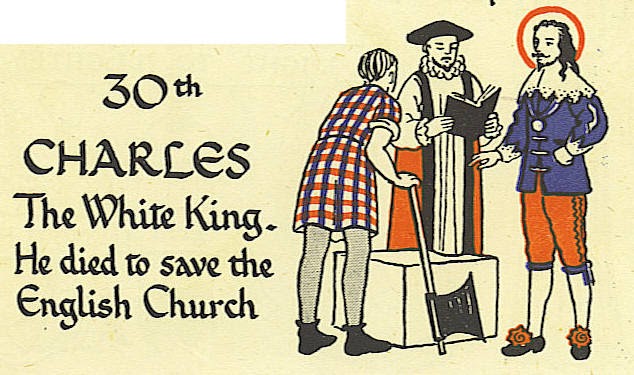