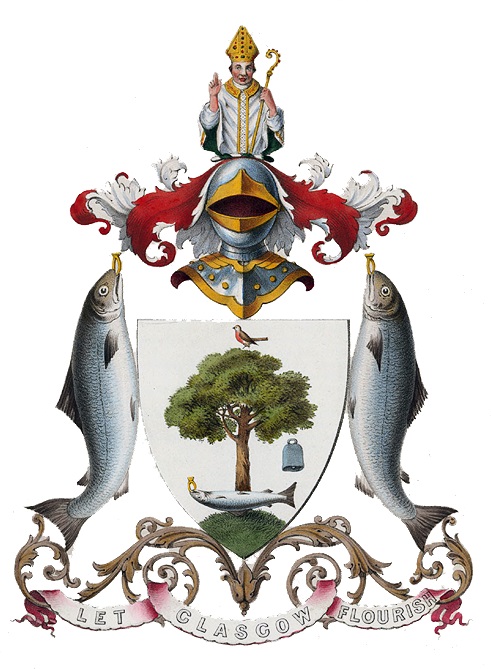 Saint Mungo appears in the crest of Glasgow's coat of arms along with his miracles.
Prayer:

O God, who through the Bishop St Kentigern caused the light of the true faith to shine forth in all its splendour by the preaching of the word, grant, we pray, that by loyal adherence to the teaching of him whose venerable feast day we celebrate, we may attain the glory of everlasting light, through Christ our Lord. Amen. 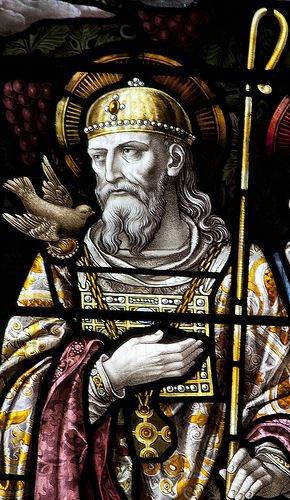 Mungo — or Kentigern — was the illegitimate son of a Princess Thenew (later St. Enoch), daughter of the King of Lothian. She became pregnant after being raped by Prince Urien of Cumbria. [Saint Thenew has been described as "Scotland's first recorded rape victim, battered woman and unmarried mother."]

When her father, King Lleudden, learned of her pregnancy, he was so enraged that he threw her from the heights of the summit of a local hill, Traprain Law. Miraculously, she survived and managed to cross the River Forth in a small boat to Culross in Fife.

It was here that her son, Kentigern was born and raised by St. Serf, an abbot who was ministering to the Celtic Picts; it was St. Serf who gave Kentigern the nickname of ‘Mungo’ (‘Dear One’ in ancient Celtic).

At the age of twenty-five, Mungo began his own Christian missionary work around the River Clyde at modern-day Glasgow. Mungo built a church on the site of the present day cathedral that bears his name and for some thirteen years he lived and worked there amongst the local people. Like his mentor, Mungo following a simple and austere life, dwelling in a small cell and winning many converts by his holy example and the power of his persuasive preaching.

However, a strong anti-Christian sentiment arose in the Kingdom of Strathclyde, headed by King Morken and Mungo was compelled to leave. He retired to Wales, via Cumbria in northwest England, and stayed for a time with St. David (Patron of Wales) at the city of St. Davids in West Wales.

Later, Mungo moved to the kingdom of Gwynedd in North Wales and founded a cathedral there, which was his seat as bishop, and from there he even undertook a pilgrimage to Rome.

On being crowned the new King of Strathclyde, Riderch Hael invited Mungo to return and he established his seat as bishop in present day Dumfries.

Later, he returned to Glasgow where a community grew up around him, becoming known as Clas-Gu, (‘Dear Family’). During this time, Mungo visited with St. Columba of Iona and the two engaged in long conversations, finally exchanging their pastoral staves.

In old age, Mungo became very weak and his chin had to be kept in place with a bandage. When he eventually passed away, on the 13th January 603 AD, he was buried on the spot where the cathedral now stands.

Up until the Reformation in Scotland, St Mungo’s shrine was a centre of pilgrimage. The Saint’s remains are still believed to be entombed within the crypt under the high altar.