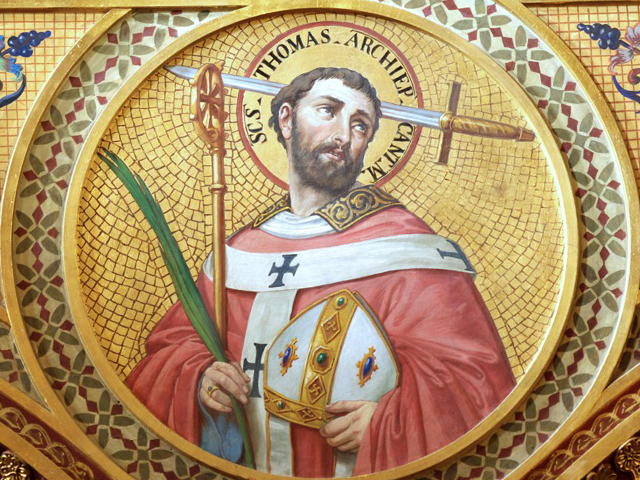 O Almighty God, by whose grace and power thy holy martyr Thomas Triumphed over suffering and was faithful even unto death: Grant us, who now remember him with thanksgiving, to be so faithful in our witness to thee in this world, that we may receive with him the crown of life; through Jesus Christ our Lord, who liveth and reigneth with thee and the Holy Spirit, one God, for ever and ever. Amen. 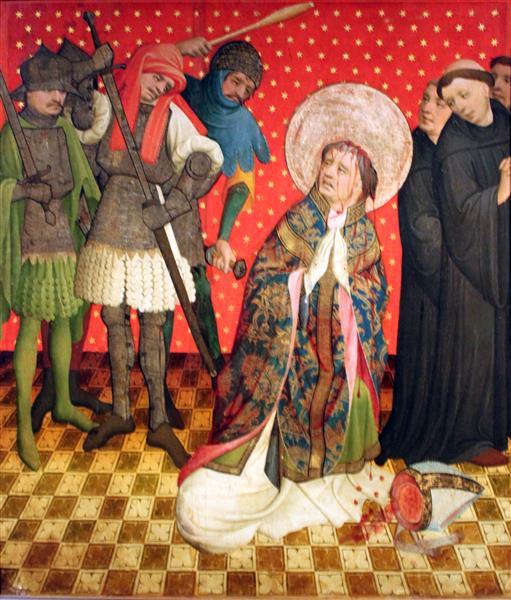 The Martyrdom of Saint Thomas of Canterbury

On December 29, we remember Thomas a Becket, Archbishop of Canterbury, slain in his own cathedral in 1170, for his defiance of King Henry II. The death of Thomas reminds us that a Christian, even when safe from pagans, can be in danger from his fellow-Christians. It also reminds us that one can be martyred in a cause where the merits of the particular issue at hand are not obvious to all men of good will. The issue here, or one of the issues, was one of court jurisdiction. King Henry claimed that a cleric accused of an ordinary crime ought to be tried in the King's Courts like any layman. Thomas, who was Henry's Chancellor and his close friend, vigorously upheld the king's position. However, when he was made Archbishop of Canterbury with the king's support, he reversed himself completely and upheld the right of clergy to be tried only in Church courts, which could not inflict capital punishment. Henry wanted an arrangement by which (for example) a priest accused of murder would be tried by a Church Court, which if it found him guilty would degrade him to the rank of a layman, whereupon a King's Court would try him, and if it found him guilty would order him hanged. Thomas objected that a man could not be tried and punished twice for the same offense.

Henry, being angered at opposition from someone whom he had counted on for support, was heard to exclaim in anger, "This fellow who has eaten my bread has lifted up his heel against me [see Psalm 41:9]. Have I no friend who will rid me of this upstart priest?" Four of his knights promptly rode to Canterbury, where they confronted the Archbishop and demanded that he back down. When he did not, they killed him. Public reaction was immediate and vigorous, and reckoned Thomas as a saint and a martyr, and Henry as a blaspheming murderer. Henry swore that he had not intended his remark to be taken seriously, and had himself publicly whipped at the tomb of Thomas. Thomas was very soon canonized, and his tomb was one of the most popular places of pilgrimage in Europe for the next three-and-a-half centuries. During a war between England and France, a King of France obtained a cease-fire to enable him to make a pilgrimage to Canterbury. Chaucer's Canterbury Tales is concerned with a group of pilgrims on their way to the tomb of Thomas.

The chief moral that I draw from Thomas's life and death is that when a man seeks to serve God, God graciously accepts that service, even if the man is quite wrong about what it is that God expects of him. 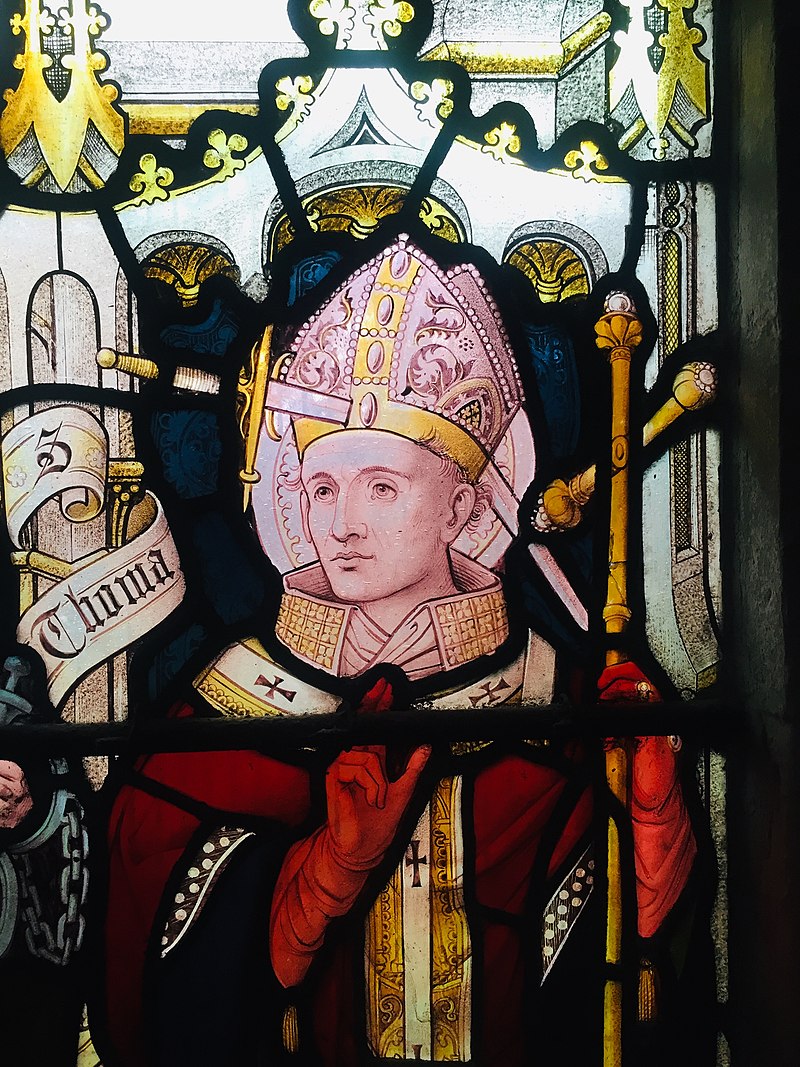 I close by quoting a section from T.S. Eliot's play, "Murder in the Cathedral," which deals with the death of Thomas. Note that the words are Eliot's and not Thomas's. I quote it not as applicable simply to Thomas, but as applicable to all martyrs (and thus appropriate during the Witness Days) and indeed as directed to all Christians in their understanding of the Christian life, and how it involves both sorrow and joy.

The Archbishop preaches in the Cathedral on Christmas morning, 1170.

"Glory to God in the highest, and on earth peace, good will toward men." The fourteenth verse of the second chapter of the Gospel according to Saint Luke. In the name of the Father, and of the Son, and of the Holy Ghost. Amen.

Dear children of God, my sermon this morning will be a very short one. I wish only that you should ponder and meditate on the deep meaning and mystery of our masses of Christmas Day. For whenever Mass is said, we re-enact the Passion and Death of Our Lord; and on this Christmas Day we do this in celebration of His Birth. So that at the same moment we rejoice in His coming for the salvation of men, and offer again to God His Body and Blood in sacrifice, oblation, and satisfaction for the sins of the whole world. It was in this same night that has just passed, that a multitude of the heavenly host appeared before the shepherds at Bethlehem, saying, "Glory to God in the highest, and on earth peace, good will toward men"; at this same time of all the year that we celebrate at once the Birth of Our Lord and His Passion and Death upon the Cross. Beloved, as the World sees, this is to behave in a strange fashion. For who in the World will both mourn and rejoice at once and for the same reason? For either joy will be overcome by mourning or mourning will be cast out by joy; so that it is only in these our Christian mysteries that we can rejoice and mourn at once for the same reason. But think for a while on the meaning of this word "peace." Does it seem strange to you that the angels should have announced Peace, when ceaselessly the world has been stricken with War and the fear of War? Does it seem to you that the angelic voices were mistaken, and that the promise was a disappointment and a cheat?

Reflect now, how Our Lord Himself spoke of Peace. He said to His disciples: "My peace I leave with you, my peace I give unto you." Did He mean peace as we think of it: the kingdom of England at peace with its neighbors, the barons at peace with the King, the householder counting over his peaceful gains, the swept hearth, his best wine for a friend at the table, his wife singing to the children? Those men His disciples knew no such things: they went forth to journey afar, to suffer by land and sea, to know torture, imprisonment, disappointment, to suffer death by martyrdom. What then did He mean? If you ask that, remember that He said also, "Not as the world giveth, give I unto you." So then, He gave to his disciples peace, but not peace as the world gives.

Consider also one thing of which you have probably never thought. Not only do we at the feast of Christmas celebrate at once Our Lord's Birth and His Death: but on the next day we celebrate the martyrdom of his first martyr, the blessed Stephen. Is it an accident, do you think, that the day of the first martyr follows immediately the day of the Birth of Christ? By no means. Just as we rejoice and mourn at once, in the Birth and Passion of Our Lord; so also, in a smaller figure, we both rejoice and mourn in the death of martyrs. We mourn, for the sins of the world that has martyred them; we rejoice, that another soul is numbered among the Saints in Heaven, for the glory of God and for the salvation of men.

Beloved, we do not think of a martyr simply as a good Christian who has been killed because he is a Christian: for that would be solely to mourn. We do not think of him simply as a good Christian who has been elevated to the company of the Saints: for that would be simply to rejoice: and neither our mourning nor our rejoicing is as the world's is. A Christian martyrdom is no accident. Saints are not made by accident. Still less is a Christian martyrdom the effect of a man's will to become a Saint, as a man by willing and contriving may become a ruler of men. Ambition fortifies the will of man to become ruler over other men: it operates with deception, cajolery, and violence, it is the action of impurity upon impurity. Not so in Heaven. A martyr, a saint, is always made by the design of God, for His love of men, to warn them and to lead them, to bring them back to His ways. A martyrdom is never the design of man; for the true martyr is he who has become the instrument of God, who has lost his will in the will of God, not lost it but found it, for he has found freedom in submission to God. The martyr no longer desires anything for himself, not even the glory of martyrdom. So thus as on earth the Church mourns and rejoices at once, in a fashion that the world cannot understand; so in Heaven the Saints are most high, having made themselves most low, seeing themselves not as we see them, but in the light of the Godhead from which they draw their being.

I have spoken to you today, dear children of God, of the martyrs of the past, asking you to remember especially our martyr of Canterbury, the blessed Archbishop Elphege; because it is fitting, on Christ's birthday, to remember what is that peace which he brought; and because, dear children, I do not think that I shall ever preach to you again; and because it is possible that in a short time you may have yet another martyr, and that one perhaps not the last. I would have you keep in your hearts these words that I say, and think of them at another time. In the name of the Father, and of the Son, and of the Holy Ghost. Amen.