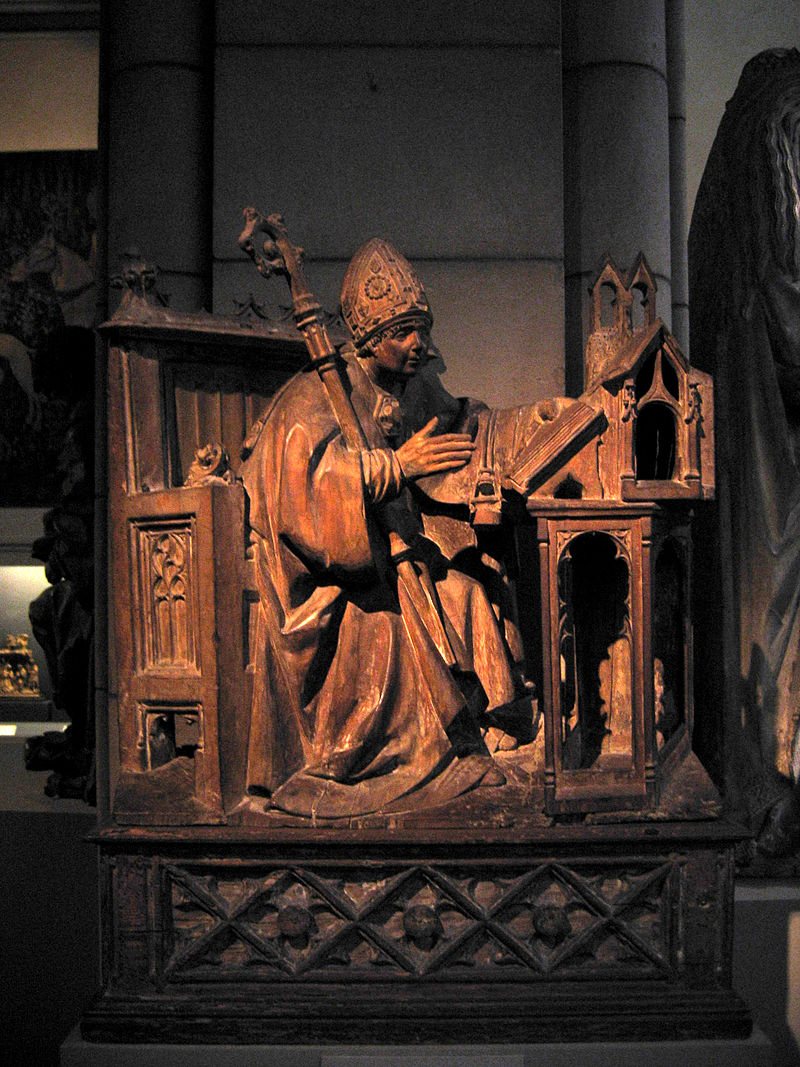 Saint Ambrose in His Study,

O God, who didst give to thy servant Ambrose grace eloquently to Declare thy righteousness in the great congregation, and fearlessly to bear reproach for the honor of thy Name: Mercifully grant to all bishops and pastors such excellency in preaching, and fidelity in ministering thy Word, that thy people may be partakers with them of the glory that shall be revealed; through Jesus Christ our Lord, who liveth and reigneth with thee and the Holy Spirit, one God, now and for ever. Amen. 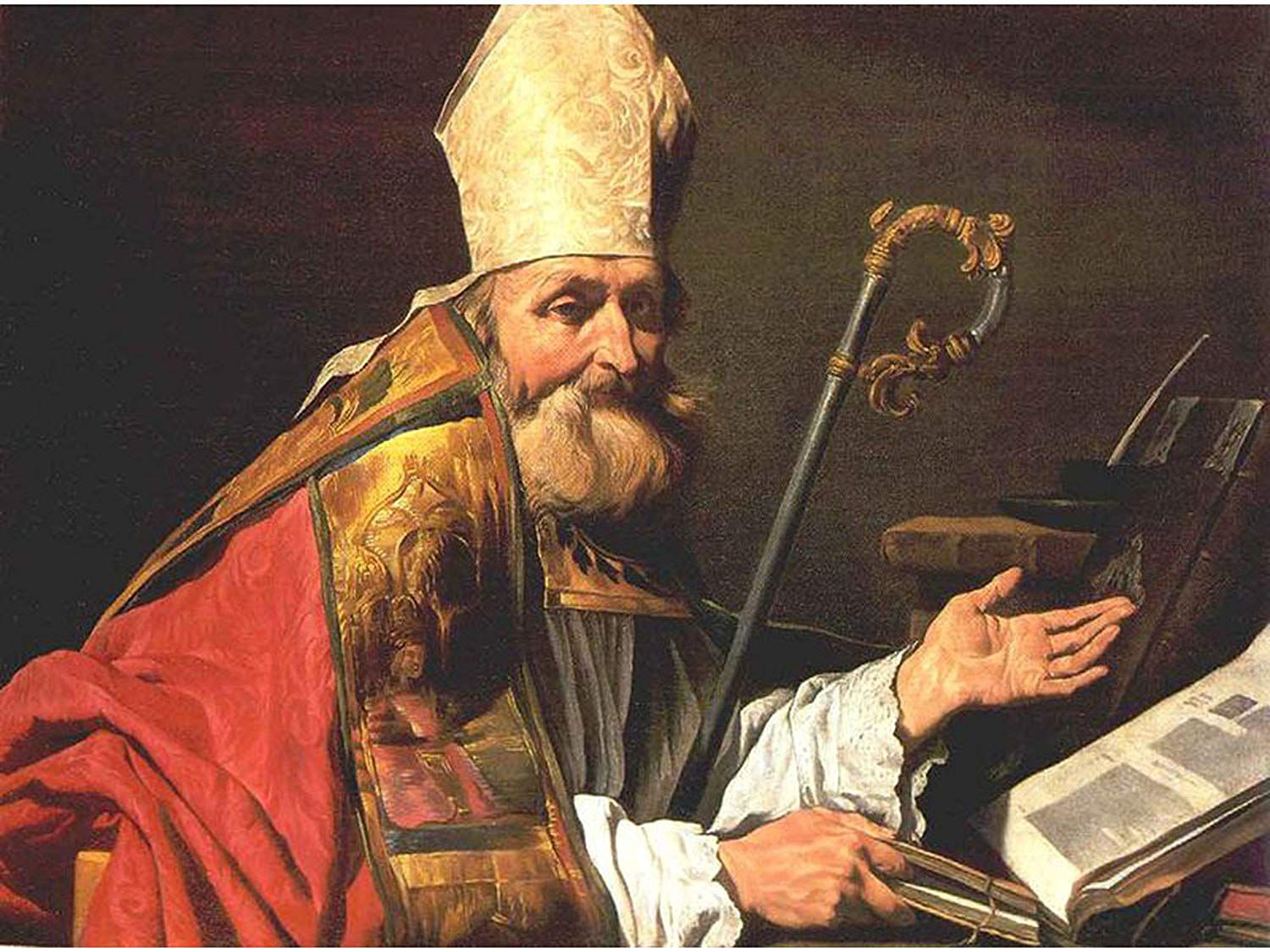 Ambrose was governor of Northern Italy, with capital at Milan. When the see of Milan fell vacant, it seemed likely that rioting would result, since the city was evenly divided between Arians and Athanasians. (Explanatory Note: Athanasians affirm that the Logos or Word (John 1:1) is fully God in the same sense that the Father is, while Arians affirm that the Logos is a creature, the first being created by the Father. East Orthodox, Roman Catholics, Anglicans, Lutherans, Prebyterians, Reformed, Baptists, Methodists, etc. are Athanasians. The Watchtower Society (J's Witnesses), the Philippine group called the Iglesia ni Christi (spelling?), and some other groups are Arians. The Unitarians started out as Arians, and some of them still hold this position.) Ambrose went to the meeting where the election was to take place, and appealed to the crowd for order and good will on both sides. He ended up being elected bishop with the support of both sides.

He gave away his wealth, and lived in simplicity. By his preaching, he converted the diocese to the Athanasian position, except for the Goths and some members of the Imperial Household. (Note: The Arian emperor Constantius (son of Constantine the Great) had sent missionaries (Arians, of course) to convert the Gothic tribes. The Goths were the chief source of mercenary troops for the Empire. Thus for many years the Army was Arian although a majority of civilians were Athanasian.) On one occasion, the Empress ordered him to turn over a church to the Arians so that her Gothic soldiers could worship in it. Ambrose refused, and he and his people occupied the church. Ambrose composed Latin hymns in the rhythm of "Praise God from Whom all blessings flow," and taught them to the people, who sang them in the church as the soldiers surrounded it. The Goths were unwilling to attack a hymn-singing congregation, and Ambrose won that dispute.

He subsequently won another dispute, when the Emperor, enraged by a crowd who defied him, ordered them all killed by his soldiers. When he next appeared at church, Ambrose met him at the door and said, "You may not come in. There is blood on your hands." The emperor finally agreed to do public penance and to promise that thereafter he would never carry out a sentence of death without a forty-day delay after pronouncing it. Less creditable, to modern Christians, is Ambrose's dispute with the emperor when certain Christians burned a Jewish synagogue, and the emperor commanded them to make restitution. Ambrose maintained that no Christian could be compelled to provide money for the building of a non-Christian house of worship, no matter what the circumstances.

Ambrose was largely responsible for the conversion of St. Augustine. The hymn Te Deum Laudamus ("We praise Thee, O God") was long thought to have been composed by Ambrose in thanksgiving for that conversion. The current opinion is that Ambrose did not write it, but that he may well have written the Creed known as the Athanasian Creed. He is perhaps the first writer of Christian hymns with rhyme and (accentual) meter, and northern Italy still uses his style of plainchant, known as Ambrosian chant, rather than the more widespread Gregorian chant. On the negative side, many Christians will regret his contribution to increased regard for the relics of martyrs.

Amrose is regarded as one of the Eight Great Doctors (=Teachers) of the Undivided Church. The list includes four Latin (Western) Doctors (Ambrose, Jerome, Augustine, and Pope Gregory the Great), and four Greek (Eastern) Doctors (Athanasius, John Chrysostom, Basil the Great, and Gregory of Nazianzus -- not to be confused with Gregory of Nyssa, the brother of Basil).