Confirm our minds, O Lord, in the mysteries of the true faith, Set forth with power by thy servant John of Damscus; that we, with him, confessing Jesus to be true God and true Man, and singing the praises of the risen Lord, may, by the power of the resurrection, attain to eternal joy; through Jesus Christ our Lord, who liveth and reigneth with thee and the Holy Spirit, one God, for evermore. Amen. 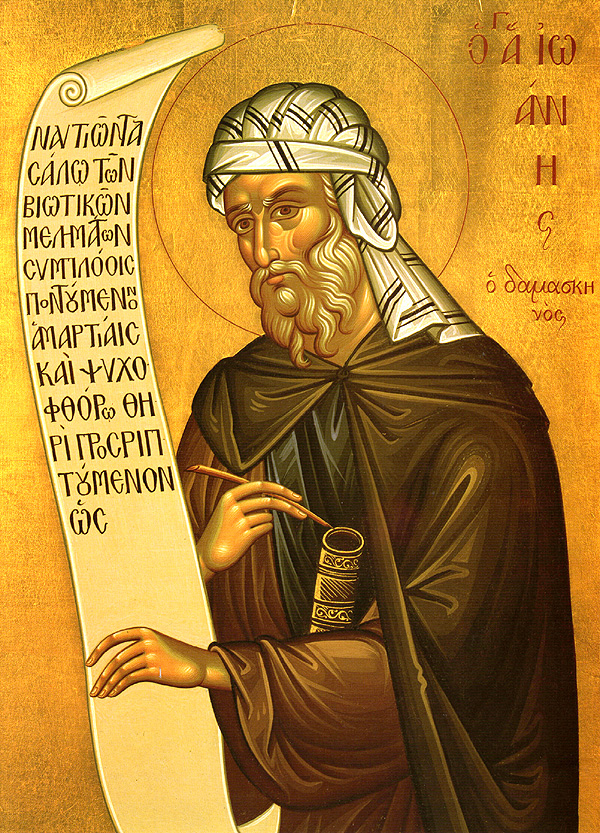 John is generally accounted "the last of the Fathers". He was the son of a Christian official at the court of the moslem khalif Abdul Malek, and succeeded to his father's office.

In his time there was a dispute among Christians between the Iconoclasts (image-breakers) and the Iconodules (image-venerators or image-respectors). The Emperor, Leo III, was a vigorous upholder of the Iconoclast position. John wrote in favor of the Iconodules with great effectiveness. Ironically, he was able to do this chiefly because he had the protection of the moslem khalif (ironic because the moslems have a strong prohibition against the religious use of pictures or images).

John is also known as a hymn-writer. Two of his hymns are sung in English at Easter ("Come ye faithful, raise the strain" and "The Day of Resurrection! Earth, tell it out abroad!"). Many more are sung in the Eastern Church.

His major writing is The Fount of Knowledge, of which the third part, The Orthodox Faith, is a summary of Christian doctrine as expounded by the Greek Fathers.

The dispute about icons was not a dispute between East and West as such. Both the Greek and the Latin churches accepted the final decision.

The Iconoclasts maintained that the use of religious images was a violation of the Second Commandment ("Thou shalt not make a graven image... thou shalt not bow down to them").

Before the Incarnation, it had indeed been improper to portray the invisible God in visible form; but God, by taking fleshly form in the person of Jesus Christ, had blessed the whole realm of matter and made it a fit instrument for manifesting the Divine Splendor. He had reclaimed everything in heaven and earth for His service, and had made water and oil, bread and wine, means of conveying His grace to men. He had made painting and sculpture and music and the spoken word, and indeed all our daily tasks and pleasures, the common round of everyday life, a means whereby man might glorify God and be made aware of Him. (Note: I always use "man" in the gender-inclusive sense unless the context plainly indicates otherwise.)

Obviously, the use of images and pictures in a religious context is open to abuse, and in the sixteenth century abuses had become so prevalent that some (not all) of the early Protestants reacted by denouncing the use of images altogether. Many years ago, I heard a sermon in my home parish (All Saints' Church, East Lansing, Michigan) on the Commandment, "Thou shalt not make a graven image, nor the likeness of anything in the heavens above, nor in the earth beneath, nor in the waters under the earth -- thou shalt not bow down to them, nor worship them." (Exodus 20:4-5 and Deuteronomy 5:8-9) The preacher (Gordon Jones) pointed out that, even if we refrain completely from the use of statues and paintings in representing God, we will certainly use mental or verbal images, will think of God in terms of concepts that the human mind can grasp, since the alternative is not to think of Him at all. (Here I digress to note that, if we reject the images offered in Holy Scripture of God as Father, Shepherd, King, Judge, on the grounds that they are not literally accurate, we will end up substituting other images -- an endless, silent sea, a dome of white radiance, an infinitely attenuated ether permeating all space, an electromagnetic force field, or whatever, which is no more literally true than the image it replaces, and which leaves out the truths that the Scriptural images convey. (One of the best books I know on this subject is Edwyn Bevan's Symbolism and Belief, Beacon Press, originally a Gifford Lectures series.) C S Lewis repeats what a woman of his acquaintance told him: that as a child she was taught to think of God as an infinite "perfect substance," with the result that for years she envisioned Him as a kind of enormous tapioca pudding. To make matters worse, she disliked tapioca. Back to the sermon.) The sin of idolatry consists of giving to the image the devotion that properly belongs to God. No educated man today is in danger of confusing God with a painting or statue, but we may give to a particular concept of God the unconditional allegiance that properly belongs to God Himself. This does not, of course, mean that one concept of God is as good as another, or that it may not be our duty to reject something said about God as simply false. Images, concepts, of God matter, because it matters how we think about God. The danger is one of intellectual pride, of forgetting that the Good News is, not that we know God, but that He knows us (1 Corinthians 8:3), not that we love Him, but that He loves us (1 John 4:10).

(Incidentally, it was customary in my parish in those days for the preacher to preach a short "Children's Sermon," after which the children were dismissed for Sunday School, and the regular sermon and the rest of the service followed. What I have described above was the Children's Sermon. I remained for the regular sermon, but found it a bit over my head -- a salutary correction to my intellectual snobbery.)

In the East Orthodox tradition, three-dimensional representations are seldom used. The standard icon is a painting, highly stylized, and thought of as a window through which the worshipper is looking into Heaven. (Hence, the background of the picture is almost always gold leaf.) In an Eastern church, an iconostasis (icon screen) flanks the altar on each side, with images of angels and saints (including Old Testament persons) as a sign that the whole church in Heaven and earth is one body in Christ, and unites in one voice of praise and thanksgiving in the Holy Liturgy. At one point in the service, the minister takes a censer and goes to each icon in turn, bows and swings the censer at the icon. He then does the same thing to the congregation -- ideally, if time permits, to each worshipper separately, as a sign that every Christian is an icon, made in the image and likeness of God, an organ in the body of Christ, a window through whom the splendor of Heaven shines forth.