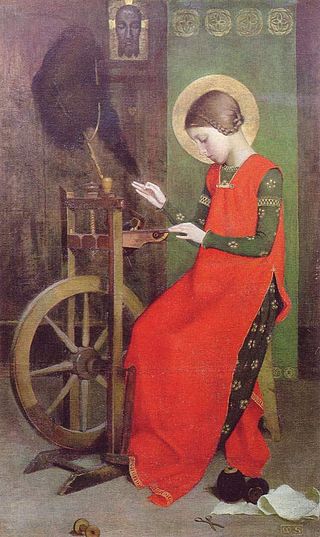 St. Elizabeth spinning wool for the poor by Marianne Stokes (1895)

Almighty God, by whose grace thy servant Elizabeth of Hungary Recognized and honored Jesus in the poor of this world: Grant that we, following her example, may with love and gladness serve those in any need or trouble, in the name and for the sake of Jesus Christ, who liveth and reigneth with thee and the Holy Spirit, one God, now and for ever. 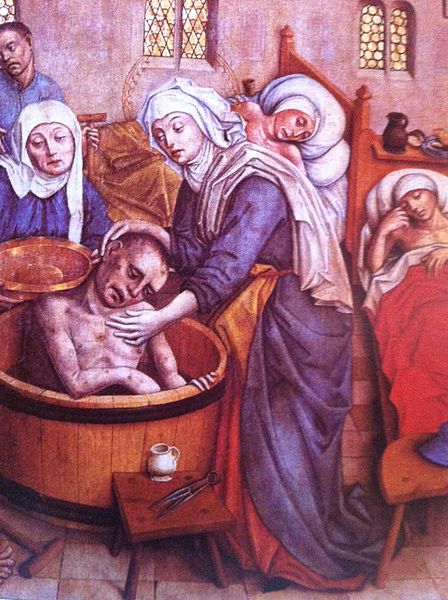 St. Elizabeth washing a sick man; a scene from the main altar of St. Elisabeth Cathedral in Kassa, 15th century

The numerous "St. Elizabeth's Hospitals" throughout the world are for the most part named, not for the Biblical Elizabeth, the mother of John the Baptist, but for this princess of Hungary. She was concerned for the relief of the poor and the sick, and with her husband's consent she used her dowry money for their relief. During a famine and epidemic in 1226, while her husband was away in Italy, she sold her jewels and established a hospital where she nursed the sick, and opened the royal granaries to feed the hungry. After her husband's death in 1227, her inlaws, who opposed her "extravagances," expelled her from Wartburg. Finally an arrangement was negotiated with them that gave her a stipend. She became a Franciscan tertiary (lay associate) and devoted the remainder of her life to nursing and charity. She sewed garments to clothe the poor, and went fishing to feed them.

St. Elizabeth with her bread and flowers