Archbishop of Canterbury and 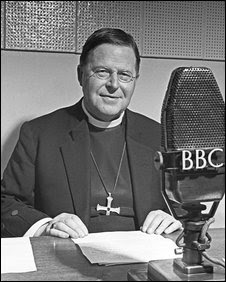 O God, our heavenly Father, who didst raise up thy faithful Servant William Temple to be a bishop and pastor in thy Church and to feed thy flock: Give abundantly to all pastors the gifts of thy Holy Spirit, that they may minister in thy household as true servants of Christ and stewards of thy divine mysteries; through the same Jesus Christ our Lord, who liveth and reigneth with thee and the same Spirit, one God, for ever and ever.

O God, who by thy Holy Spirit dost give to some the word of Wisdom, to others the word of knowledge, and to others the word of faith: We praise thy Name for the gifts of grace manifested in thy servant William Temple, and we pray that thy Church may never be destitute of such gifts; through Jesus Christ our Lord, who with thee and the same Spirit liveth and reigneth, one God, for ever and ever. 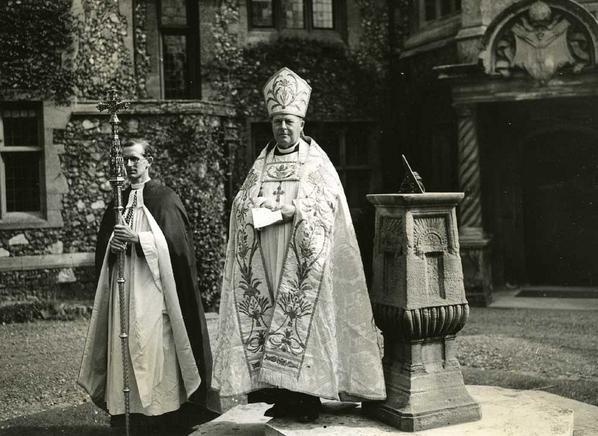 Temple's admirers have called him "a philosopher, theologian, social teacher, educational reformer, and the leader of the ecumenical movement of his generation," "the most significant Anglican churchman of the twentieth century," "the most renowned Primate in the Church of England since the English Reformation," "Anglican's most creative and comprehensive contribution to the theological enterprise of the West." One of his biographers lists him (along with Richard Hooker, Joseph Butler, and Frederick Denison Maurice) as one of the Four Great Doctors of the (post-Reformation) Anglican Communion.

Ronald Knox, in a satiric poem, described him thus:

A man so broad, to some he seem'd to be

Not one, but all Mankind in Effigy.

Who, brisk in Term, a Whirlwind in the Long,

Did everything by turns, and nothing wrong.

As Thinker, Usher, Statesman, or Divine.

Who was this remarkable person?

William Temple, 98th Archbishop of Canterbury, was born in 1881, the second son of Frederick Temple (born 1821, priest 1847, headmaster of Rugby 1857, Bishop of Exeter 1869, Bishop of London 1884, Archbishop of Canterbury 1897, died 1902). At the age of two, he had the first attack of the gout that would be with him throughout life and eventually kill him. His eyesight was bad, and a cataract, present from infancy, left him completely blind in the right eye when he was 40. However, he was an avid reader, with a near-photographic memory, and once he had read a book, it was his. He was a passionate lover of the music of Bach. In literature, his special enthusiasms were poetry (Browning and Shelley), drama (the Greeks and Shakespeare), and a few novels, especially The Brothers Karamazov. He believed that theological ideas were often explored most effectively by writers who were not explicitly writing theology.

He was at Oxford (Balliol) from 1900 to 1904, and was president of the Oxford Union (the debating society of the University). Here he developed a remarkable ability to sum up an issue, expressing the pros and cons so clearly and fairly that the original opponents often ended up agreeing with each other. This ability served him in good stead later when he moderated conferences on theological and social issues. However, it was not just a useful talent for settling disputes. It was, or developed into, an important part of his philosophy, a belief in Dialectic, derived from Hegel and from Plato. He thought that beliefs and ideas reach their full maturity through their response to opposing ideas.

In 1906, he applied for ordination, but the Bishop of Oxford would not ordain him because he admitted that his belief in the Virgin Birth and the Bodily Resurrection of Jesus was shaky. However, Davidson, the Archbishop of Canterbury, after a careful examination, decided that Temple's thought was developing in a direction that would inevitably bring him into an orthodox position, and decided to take a chance on ordaining him (deacon 1909, priest 1910). He may be said to have won his bet, in that by 1913 Temple had indeed committed himself fully to the orthodox position, and could write: "I believe in the Virgin Birth...it wonderfully holds before the imagination the truth of Our Lord's Deity and so I am glad that it is in the Creed. Similarly I believe in our Lord's Bodily Resurrection."

In 1908 he became president of the Workers' Educational Association (founded by Frederick Denison Maurice), and in 1918 joined the British Labour Party, and worked actively for the implementing of its platform. He also became vigorously involved in movements for Christian co-operation and unity, in missions, in the British Council of Churches, in the World Council of Churches, in the Church of South India (a merger of Anglican, Congregationalist, Methodist, and Presbyterian churches into a single church, with provisions for safeguarding what each group thought essential).

In 1916 he married Frances Anson, and the night before the wedding he stayed up late to finish writing his first major theological treatise, Mens Creatrix (the Creative Mind). Eight years later he published a companion volume, expanding and clarifying the ideas of the first, called Christus Veritas (Christ the Truth). In 1921 he was made Bishop of Manchester, a heavily industrial city. In 1926 Britain experienced what was known as the General Strike, in which most workmen in all trades and industries went on strike, not against their particular employers, but against the social and economic policies of the country as a whole. In Manchester this meant primarily a coal stoppage. Temple worked extensively to mediate between the parties, and helped to bring about a settlement that both sides regarded as basically fair.

He excelled, it would seem, not as a scholar, but as a moderator, and above all as a teacher and preacher. In 1931, at the end of the Oxford Mission (what is known in many Protestant circles as a Revival Meeting), he led a congregation in the University Church, St Mary the Virgin, in the singing of the hymn, "When I Survey the Wondrous Cross." Just before the last stanza, he stopped them and asked them to read the words to themselves. "Now," he said, if you mean them with all your heart, sing them as loud as you can. If you don't mean them at all, keep silent. If you mean them even a little and want to mean them more, sing them very softly." The organ played, and two thousand voices whispered:

That were an offering far too small;

For many who participated, it was a never-forgotten experience.

Temple became Archbishop of Canterbury in 1942, when a German invasion seemed likely. He worked for the relief of Jewish refugees from Naziism, and publicly supported a negotiated peace, as opposed to the unconditional surrender that the Allied leaders were demanding.

His gout worsened. His last public appearance was at a clergy retreat (a time spent in a secluded place, with silence, prayer, meditation, reading, and listening to sermons), where he was taken be ambulance and spoke standing on his one good foot. He died on 26 October 1944.

The current issue of Books in Print (American) shows the following works available by him. (Stars mark what one biographer calls his three most important books.)

Essay on the Origin and Nature of Government, $14.50 Ams Press

*Nature, Man, and God (the Gifford Lectures 1932-33). $67.50 Ams Press. (The Gifford Lectures are an endowed annual series of lectures on Natural Theology--that is, the lecturer is to take his evidence from the observed facts of nature and not ask his listeners to accept the genuineness of any particular revelation to Moses or David or Mohammed or.... The series is prestigious. William James's The Varieties of Religious Experience and Edwyn Bevan's Symbolism and Belief were both originally Gifford's Lectures.)

Other works of his, not listed as being in print, but presumably included in the Works mentioned above (although the title does noe explicitly say Complete Works), include the following: