Feast Day of Holy Michael and All Angels

The Feast Day of

Holy Michael and All Angels O everlasting God, who hast ordained and constituted the Ministries of angels and men in a wonderful order: Mercifully grant that, as thy holy angels always serve and worship thee in heaven, so by thy appointment they may help and defend us on earth; through Jesus Christ our Lord, who liveth and reigneth with thee and the Holy Spirit, one God, for ever and ever. Amen. 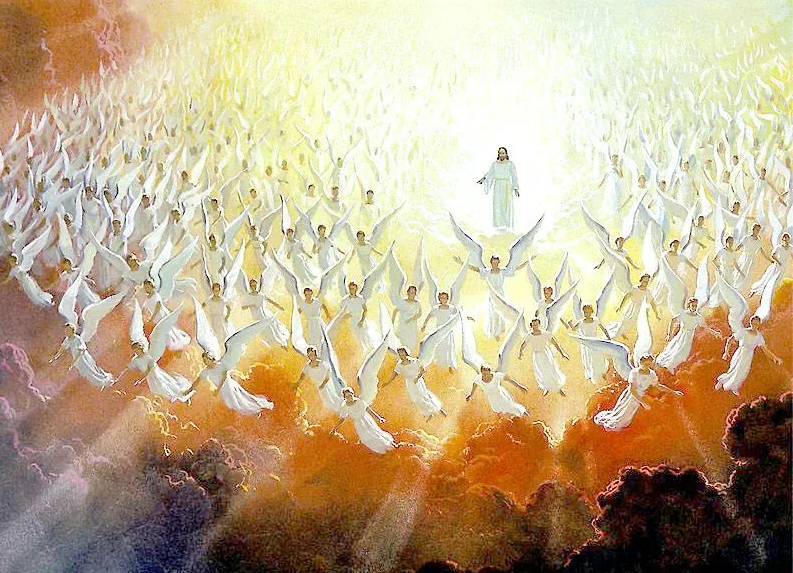 "Ye watchers and ye holy ones" 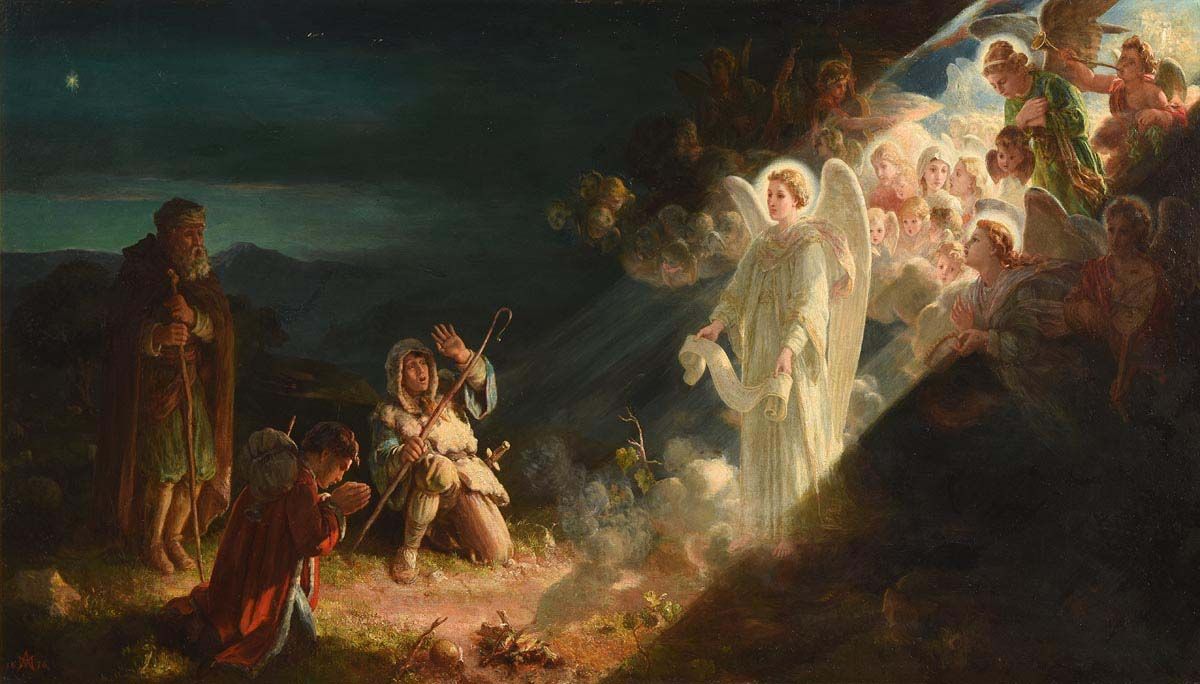 "This is the feast day of St. Michael and all the Angels. It is the most ancient of all the angel festivals. The Anglican church celebrates all angels, both name and unnamed on one day. Roman and Orthodox Churches separate them into two categories (with the unnamed angels having their feast day on October 2nd)." [1]

"A long tradition identifies St. Michael the Archangel, as the leader who remained faithful to God, and cast Lucifer at God’s command. His powerful aid has always been invoked by the Church in time of emergency." [2]

From the Society of Archbishop Justus [3]:

On the Feast of Michael and all Angels, popularly called Michaelmas, we give thanks for the many ways in which God's loving care watches over us, both directly and indirectly, and we are reminded that the richness and variety of God's creation far exceeds our knowledge of it.

The Holy Scriptures often speak of created intelligences other than humans who worship God in heaven and act as His messengers and agents on earth. We are not told much about them, and it is not clear how much of what we are told is figurative. Jesus speaks of them as rejoicing over penitent sinners (Lk 15:10). Elsewhere, in a statement that has been variously understood (Mt 18:10), He warns against misleading a child, because their angels behold the face of God. (Acts 12:15 may refer to a related idea.)

In the Hebrew Scriptures, it is... reported that someone saw a man who spoke to him with authority, and who he then realized was no mere man, but a messenger of God. Thus we have a belief in super-human rational created beings, either resembling men in appearance or taking human appearance when they are to communicate with us. They are referred to as "messengers of God," or simply as "messengers." The word for a messenger in Hebrew is Malach, in Greek, Angelos, from which we get our word "angel".

There [are] thought to be four archangels, named Michael, Gabriel, Raphael, and Uriel. An alternative tradition has seven archangels (see Tobit 12:15 and 1 Enoch 20). Gabriel (the name means "God is my champion") is thought of as the special bearer of messages from God to men. He appears in Daniel 8:16; 9:21 as an explainer of some of Daniel's visions. According to the first chapter of Luke, he announced the forthcoming births of John the Baptist and of our Lord to Zachariah and the Virgin Mary respectively. Vienna – The Annunciation paint in presbytery of Salesianerkirche church

Raphael (the name means "God heals") is mentioned in the Apocrypha, in the book of Tobit, where, disguised as a man, he accompanies the young man Tobias on a quest, enables him to accomplish it, and gives him a remedy for the blindness of his aged father. Uriel (the name means "God is my light" -- compare with "Uriah", which means "the Lord is my light") is mentioned in 4 Esdras.

It is thought by many scholars that the seven lamps of Revelation 4:5 are an image suggested by (among many other things) the idea of seven archangels.

What is the value to us of remembering the Holy Angels? Well, since they appear to excel us in both knowledge and power, they remind us that, even among created things, we humans are not the top of the heap. Since it is the common belief that demons are angels who have chosen to disobey God and to be His enemies rather than His willing servants, they remind us that the higher we are the lower we can fall. The greater our natural gifts and talents, the greater the damage if we turn them to bad ends. The more we have been given, the more will be expected of us. And, in the picture of God sending His angels to help and defend us, we are reminded that apparently God, instead of doing good things directly, often prefers to do them through His willing servants, enabling those who have accepted His love to show their love for one another. 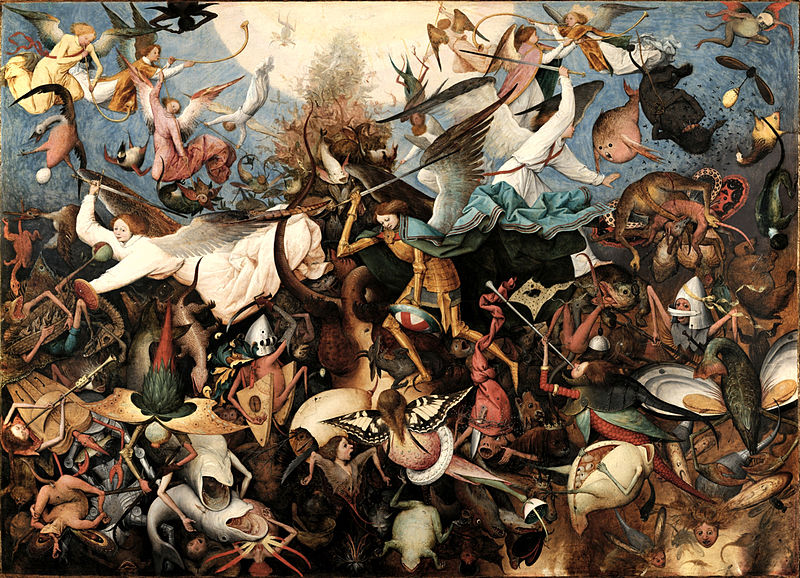 The Fall of the Rebel Angels by Pieter Bruegel the Elder

Everything You Never Wanted To Know About Angels

The major post-New-Testament source for Christian ideas about angels is a writer (probably a fifth-century Syrian monk) who signed himself "Dionysius the Areopagite." His writings were taken to be those of a convert of the Apostle Paul, mentioned in Acts 17:34. Accordingly, when he wrote on angels (or any other theological subject), he was assumed to know what he was talking about. His writings had a considerable influence on the portrayal of angels in art and in the popular imagination. 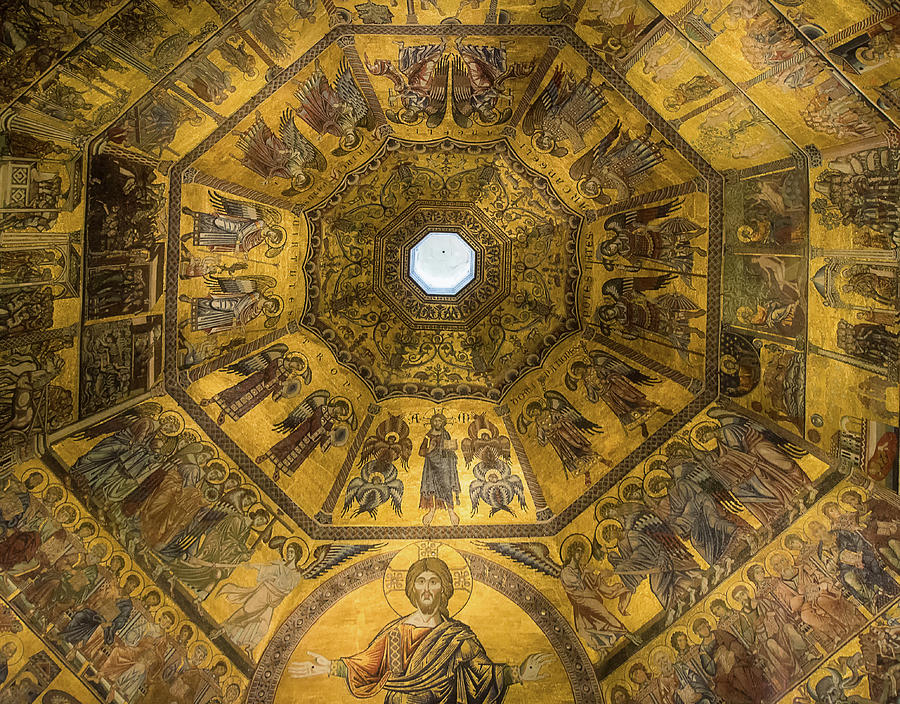 Choirs of Angels with Christ, Mosaic Ceiling of the Baptistry in Florence, Italy

What Are the Nine Choirs?

+ [Christ is seated at the right hand of the Father,] far above

+ For by him [the Son] were all things created, that are in heaven, + and that are in earth, visible and invisible, whether they be + thrones, or dominions, or principalities, or powers: all things + were created by him, and for him. (Col 1:16)

+ I am persuaded that neither death, nor life, nor angels,nor + principalities, nor powers... shall be able to separate us from + the love of God, which is in Christ Jesus our Lord. (Rom 8:38f)

+ For we contend not against flesh and blood, but against + principalities, against powers, against the rulers of the + darkness of this world, against evil spirits in the heights. + (Eph 6:12)

+ ...that through the churh the manifold wisdom of God might now

+ be made known to the principalities and powers in the heavenly

+ And you are complete in him, who is the head of all

+ And having disarmed principalities and powers, he made a show + of them openly, triumphing over them in it. (Col 2:15)

Early commentators tended to take "principalities, powers" etc. as the names of various kinds of angelic beings. Since demons are considered to be fallen or rebelious angels, the quotations from Ephesians 6:12 and Colossians 2:15 are no problem.

Dionysius states that there are nine orders (or choirs) of angels, three triads of three each, in order from highest to lowest as shown in the following table.

The lowest order, called simply angels, are God's messengers and envoys to (and guardians of) the human race. The highest order, the seraphim, devote themselves to contemplating God, beholding Him face to face, and loving and praising Him. Each order helps to reveal and declare God's glory to the order below. 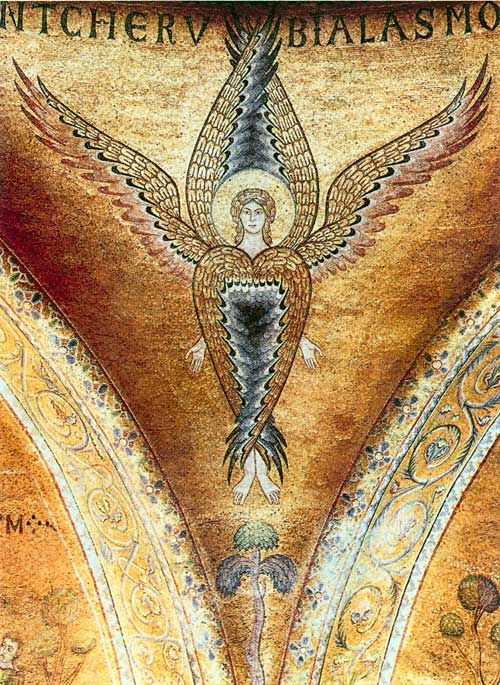 What Is a Seraph?

Seraphim are mentioned in the Bible in Isaiah's vision of the heavenly throne-room (Is 6:1-7), where the Lord is seated between two seraphim. (In Hebrew, most masculine nouns form the plural by adding "-im".) Each has six wings, and with two he covers his face, and with two he covers his feet, and with two he flies. Later writers identify these functions with poverty, chastity, and obedience. Poverty, in that he veils his face, a sign of humility. Chastity, in that he covers his feet, a standard Hebrew idiom (or euphemism) for the lower body, including the crotch. Obedience, in that he flies to carry out whatever commission he receives from God. The word "seraph" comes from a root meaning "to burn", and the word is used in Nu 21:6,8; Dt 8:15; Is 14:29; 30:6; where it is translated "fiery serpent." Probably the Hebrews pictured a seraph as a kind of fiery winged serpent or reptile.

Learn more about the seraphim: https://www.christianity.com/wiki/angels-and-demons/who-are-the-seraphim-in-the-bible.html

Virgin and child with cherubim by Bernardina Fungai

What Is a Cherub?

Cherubim are first mentioned in the Bible in Gen 3:24, where Adam and Eve are expelled from the Garden, and two cherubim are set at the gate to guard it, so that no one may enter.

The Psalmist says of God:

+ He rode upon a cherub, and did fly;

+ thou that dwellest between the cherubim (80:1)

+ he sitteth between the cherubim; let the earth quake (99:1)

From this we infer that they were pictured and thought of as winged creatures flanking or supporting the throne of God.

In Ex 25f and 36f, the Israelites are to make a chest called the Ark of the Covenant, and place on the lid statues of two cherubim, with their wings arching over and meeting in the middle. Aside from the fact that they had wings, we are not told anything about their appearance. It was apparently taken for granted that the Israelites already knew what a cherub was supposed to look like.

The Ark represented the presence of God, and presumably the Israelites thought of the cherubim as guarding or flanking or supporting an invisible throne. Thus, the Ark gave two complementary messages. On the one hand, it said, "The Lord cannot be represented by a picture or statue. He is spirit, He is invisible. He is transcendant. The whole universe cannot contain Him." On the other hand, it said, "Here is the place where the Lord chooses to reveal Himself. This is the place toward which you are to direct your homage, this is the focus of your worship."

The prophet Ezekiel records two visions (Ez 1 and 10) in which the Lord appears to him, enthroned above four figures identified as cherubs. Each is said to have four faces, one facing in each direction, the face of a man, a lion, a bull, and an eagle.

Learn more about the cherubim: https://www.christianity.com/wiki/angels-and-demons/what-is-a-cherub-the-cherubim-in-the-bible.html

“The Angels Will Deliver Us” by Origen of Alexandria, Father of the Church [4]:

When anyone prays, the angels that minister to God and watch over mankind gather round about him and join with him in his prayer. Nor is that all. Every Christian-each of the “little ones” who are in the Church-has an angel of his own, who “always beholds the face of our Father which is in heaven” (Matthew 18:10), and who looks upon the Godhead of the Creator. This angel prays with us and works with us, as far as he can, to obtain the things for which we ask.

“The angel of the Lord,” so it is written, “encamps beside those who fear the Lord and delivers them” (Psalm 33:8), while Jacob speaks of “the angel who delivers me from all evils” (Genesis 48:16): and what he says is true not of himself only but of all those who set their trust in Christ, since they all fear the Lord, each of them will have, encamped beside him, his own angel whom God has appointed to guard him and care for him. So, when the saints are assembled, there will be a double Church, one of men and one of angels.