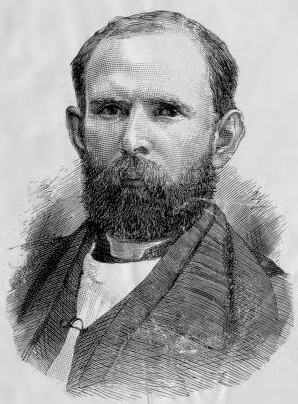 Precious in thy sight, O Lord, is the death of thy saints, Whose faithful witness, by thy providence, hath its great reward: We give thee thanks for thy martyrs James Hannington and his companions, who purchased with their blood a road unto Uganda for the proclamation of the Gospel; and we pray that with them we also may obtain the crown of righteousness which is laid up for all who love the appearing of our Savior Jesus Christ; who liveth and reigneth with thee and the Holy Spirit, one God, for ever and ever.

Almighty God, who didst call thy faithful servants James Hannington and his companions to be witnesses and martyrs in Africa, and by their labors and sufferings didst raise up a people for thine own possession: Pour forth thy Holy Spirit upon thy Church in every land, that by the service and sacrifice of many, thy holy Name may be glorified and thy kingdom enlarged; through Jesus Christ our Lord, who liveth and reigneth with thee and the Holy Spirit, one God, now and ever.

O God, whose blessed martyrs in Uganda opened in the heart of Africa the new and living way of thy Son our Savior Jesus Christ: Grant us, who cherish their remembrance before thee this day, to remain steadfast in our faith in him, to whom they gave obedience unto death; even the same Jesus Christ thy Son our Lord, who liveth and reigneth with thee and the Holy Spirit, one God, now and for ever.

The Story of Africa and its Explorers (1892)

Among the new nations of Africa, Uganda is the most predominantly Christian. Mission work began there in the 1870's with the favor of King Mutesa, who died in 1884. However, his son and successor, King Mwanga, opposed all foreign presence, including the missions.

James Hannington, born 1847, was sent out from England in 1884 by the Anglican Church as missionary Bishop of Eastern Equatorial Africa. As he was travelling toward Uganda, he was apprehended by emissaries of King Mwanga. He and his companions were brutally treated and, a week later, 29 October 1885, most of them were put to death. Hannington's last words were: "Go tell your master that I have purchased the road to Uganda with my blood."

The first native martyr was the Roman Catholic Joseph Mkasa Balikuddembe, who was beheaded after having rebuked the king for his debauchery and for the murder of Bishop Hannington. On 3 June 1886 (see Bio), a group of 32 men and boys, 22 Roman Catholic and 10 Anglican, were burned at the stake. Most of them were young pages in Mwanga's household, from their head-man, Charles Lwanga, to the thirteen-year-old Kizito, who went to his death "laughing and chattering." These and many other Ugandan Christians suffered for their faith then and in the next few years.

In 1977, the Anglican Archbishop Janani Luwum and many other Christians suffered death for their faith under the tyrant Idi Amin.

Thanks largely to their common heritage of suffering for their Master, Christians of various communions in Uganda have always been on excellent terms. 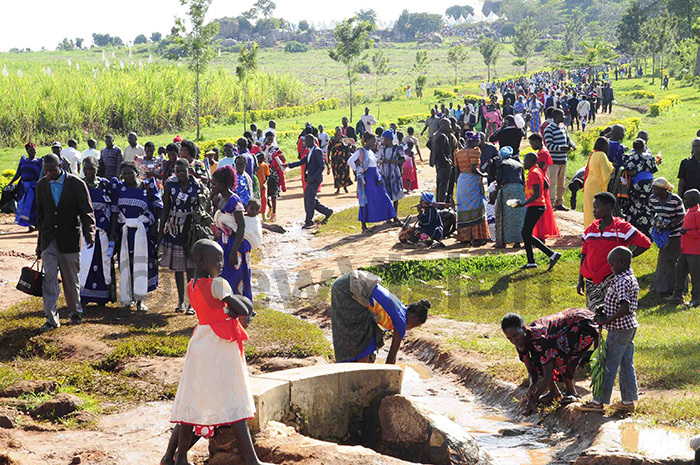 A pilgrim washing her feet at the holy well at Kyando where Bishop James Hannington was murdered in 1885.