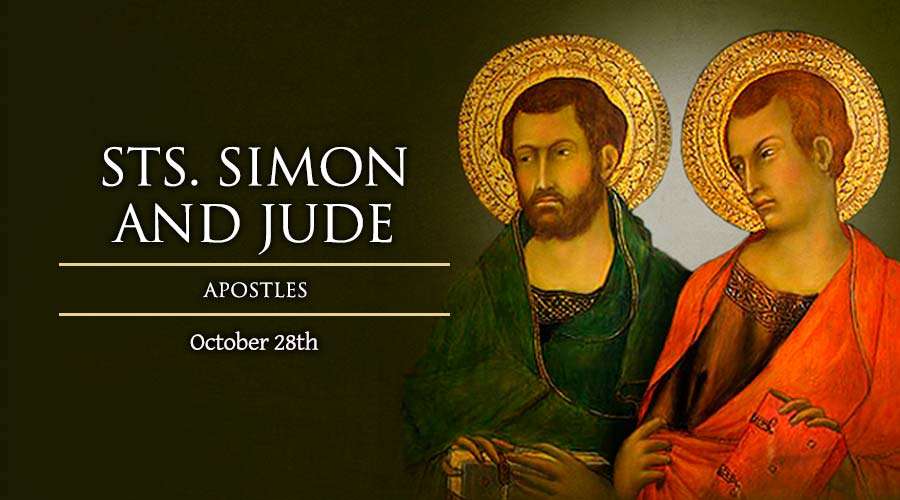 O Almighty God, who hast built thy Church upon the foundation Of the Apostles and Prophets, Jesus Christ himself being the head corner-stone; Grant us so to be joined together in unity of spirit by their doctrine, that we may be made a holy temple acceptable unto thee; through the same Jesus Christ Our Lord.

O God, we thank thee for the glorious company of the apostles, And especially on this day for Simon and Jude; and we pray thee that, as they were faithful and zealous in their mission, so we may with ardent devotion make known the love and mercy of our Lord and Savior Jesus Christ, who liveth and reigneth with thee and the Holy Spirit, one God, for ever and ever. On the various New Testament lists of the Twelve Apostles (Matthew 10:2-4; Mark 3:16-19; Luke 6:14-16; Acts 1:13), the tenth and eleventh places are occupied by Simon the Zealot (also called Simon the "Cananean," the Aramaic word meaning "Zealot") and by Judas [Jude] of James, also called Thaddaeus or Lebbaeus.

[According to] some ancient Christian writers... Simon and Jude went together as missionaries to Persia, and were martyred there. If this is true, it explains, to some extent, our lack of historical information on them and also why they are usually put together.

Simon is not mentioned by name in the New Testament except on these lists. Some modern writers have used his surname as the basis for conjectures associating him, and through him Jesus and all His original followers, with the Zealot movement described by Josephus, a Jewish independence movement devoted to assassination and violent insurrection. However, there were many movements that were called Zealot, not all alike, and Josephus tells us (Jewish War 4,3,9) that the movement he is describing did not arise until shortly before the destruction of the Temple in 70 Ad.

After the Last Supper it was Jude who asked Our Lord why he chose to reveal Himself only to the disciples. He received the reply: "If anyone loves me, he will keep my word, and my Father will love him, and we will come to him and make our home with him." (John 14:22f)

The ninth name on the lists of Apostles is that of James (the son) of Alphaeus. Although most modern translations render "Judas of James" as "Judas the son of James," there has been a tendency to understand it as "Judas the brother of James" and to assume that these two apostles were brothers. This assumption in turn leads to an identification of the two with the "brothers of the Lord" of the same name. The difficulty with this is that the brothers (at least some of them) did not believe in Jesus until after the Resurrection, and therefore could not have been part of the Twelve.

The New Testament Epistle of Jude was written by "Judas the brother of James," which could refer to either Jude. In any case, we commemorate on this day (1) Simon the Zealot, one of the original Twelve; (2) Judas of James (also called Thaddaeus or Lebbaeus), also one of the original Twelve; and (3) Jude (or Judas) the brother of James and author of the Epistle, without settling the question of whether (2) and (3) are the same person.

The Epistle of Jude is a brief document addressed to the Church, and warns against corrupt influences that have crept in. It has some obscure and baffling references to old Jewish traditions, but it includes a memorable exhortation to "contend for the faith once delivered to the saints," and an even more memorable closing:

+ Now unto him that is able to keep you from falling, and to + present you faultless before the presence of his glory with + exceeding great joy, to the only wise God, or Savior, be glory + and majesty, dominion and power, both now and ever. Amen.

Jude is often, in popular usage, referred to as the patron of desperate causes, the "saint of last resort," the one you ask for help when all else fails. Some readers will wonder what this is all about.

Since his name reminds hearers of Judas Iscariot, there is a tendency for someone asking a Christian brother now with the Lord for intercessory prayers to try one of the other apostles first. Hence, Jude has come to be called "the saint of last resort," the one whom you ask only when desperate.

Doubtless, you want to hear my personal opinion on this business of invocation of saints. Since you insist....

In the first place, the expression, "praying to Saint X" is misleading and unfortunate. In older English "pray" simply meant to request politely. Thus, in the Kjv, we read that Jesus boarded Simon Peter's ship and "prayed him that he would thrust out a little from the land." (L 5:3) Thus, the idea of "praying to Saint X" is simply the idea of asking a fellow Christian to intercede with God on one's behalf. It is not different in principle from asking your Christian roommate to pray for you. However, in modern English, the word "pray" is generally understood to refer to worship. I therefore urge everyone who talks about "praying to Saint X" to modernize his language and instead talk about "asking Saint X to join me in praying to God for the recovery of my sick aunt," or whatever. The other way of talking can mislead others, and it can mislead the speaker.

That was a preliminary comment on terminology. Now to the question. Undoubtedly asking one's fellow Christians in heaven for their prayers is something that can be abused. It can readily degenerate into the notion that getting what you want from God is a matter of knowing what channels to go through, what strings to pull. One ends up thinking of heaven as a place like the seat of a corrupt government (whether Washington or Versailles), where favors are traded and deals are made by influence peddlers. But the fact that something can be abused does not mean that we ought to give up its proper use. And surely one of the most valuable truths of the Christian faith is that God's love for us moves us to love in return, not only God but also one another, so that every Christian is a mirror in which the light of Christ is reflected to every other Christian. The Scriptures seem to show that God delights in giving us gifts through others when He could just as easily have given them directly. When Paul on the road to Damascus asks, "Lord, what will you have me do?" God does not tell him, but sends Ananias to tell him instead (A 9:1-19). When the centurion Cornelius is praying, God sends an angel to speak to him, but the angel does not preach the Gospel to him. It tells him to send for a man called Peter, and Peter comes and preaches the Gospel to him (A 10). God wants us to owe our spiritual well-being, not just to Him, but also to one another. Hence He has told us to pray for one another. Nor is the bond of Christian love broken by death. The martyrs under the altar in John's vision (Rev 6:9ff) pray for the church on earth. Even the Rich Man in Hell, in Jesus' parable, intercedes for his five brothers on earth. Are we to suppose that the saved are less compassionate than the damned?

Is this an important part of my faith, you ask. Well, it is certainly an important doctrine that Jesus said: "A new commandment I give you, that you love one another as I have loved you." To feel myself surrounded by the love of God and of my fellow Christians, living and dead, is important. To love in return, by praying for my fellow Christians as well as for my own concerns, is important. It is not for nothing that Jesus taught us to pray: "Give Us Our daily bread, and forgive Us Our sins." Do I spend a significant fraction of my prayer time asking various Christians now in heaven for their prayers. No, just as I do not spend a lot of time asking my fellow Christians here on earth for their prayers. But I do ask for, and value, the prayers of my fellow Christians, living and dead; and I delight in the knowledge that when I praise God, my voice is part of a great chorus of praise in which angels, glorified and perfected saints, saints still on their pilgrimage, and even (in ways befitting their natures) beasts, plants, and inanimate objects join together. "Let all things praise the Lord." Amen.