Brother of Our Lord Jesus Christ,

O Lord Jesus Christ, who didst set thy brother James on the Throne of thy church in Jerusalem: Grant, we beseech thee, that as he continually made supplication for the sins of thy people, and labored to reconcile in one body both Jew and Gentile; so thy Church may give itself continually to prayer and to the reconciliation of all who are at variance and enmity, and may ever be an effectual witness for the salvation of all mankind. Grant this, O Son of Man, who art on the right hand of the Father, in the unity of the Spirit, now and ever.

Grant, we beseech thee, O God, that after the example of thy Servant James the Just, brother of our Lord, thy Church may give itself continually to prayer and to the reconciliation of all who are at variance and enmity; through the same our Lord Jesus Christ, who liveth and reigneth with thee and the Holy Spirit, one God, now and ever. 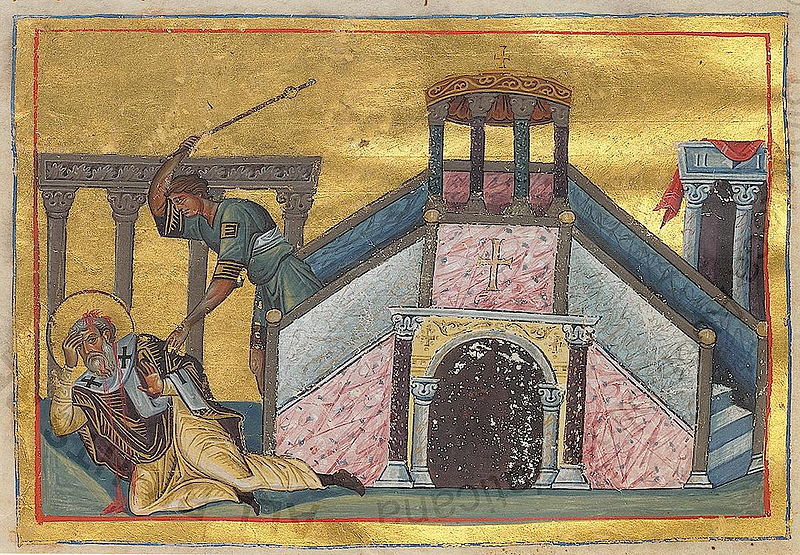 Martyrdom of James the Just in Menologion of Basil II, a manuscript dating from late tenth or early eleventh century.

James of Jerusalem is referred to in the New Testament as the brother of Our Lord Jesus Christ.

He was for many years the leader of the Christian congregation in Jerusalem, and is generally supposed to be the author of the Epistle of James, although the Epistle itself does not state this explicitly.

We are told that Jesus' brothers did not believe in Him (J 7:2-5), and from this, and from references in early Christian writers, it is inferred that James was not a disciple of the Lord until after the Resurrection.

Paul, listing appearances of the Risen Lord (1 Cor 15:3-8), includes an appearance to James.

Peter, about to leave Jerusalem after escaping from Herod, leaves a message for James and the Apostles (A 12:17).

When a council meets at Jerusalem to consider what rules Gentile Christians should be required to keep, James formulates the final consensus (A 15:13-21).

Paul speaks of going to Jerusalem three years after his conversion and conferring there with Peter and James (G 1:18-19), and speaks again of a later visit (perhaps the one described in A 15) on which Peter, James, and John, "the pillars," placed their stamp of approval on the mission to the Gentiles (G 2:9).

A few verses later (G 2:11-14), he says that messengers from James coming to Antioch discouraged Jewish Christians there from eating with Gentile Christians. (If this is refers to the same event as A 15:1-2, then Paul takes a step back chronologically in his narration at G 2:11, which is not improbable, since he is dictating and mentioning arguments and events that count as evidence for his side as they occur to him.)

On his last recorded visit to Jerusalem, Paul visits James (others are present, but no other names are given) and speaks of his ministry to the Gentiles (A 21:18).

Outside the New Testament, James is mentioned by the Jewish historian Josephus, who calls him "the brother of Jesus the so-called Christ," and reports that he was much respected even by the Pharisees for his piety and strict observance of the Law, but that his enemies took advantage of an interval between Roman governors in 62 AD to have him put to death. His death is also reported by the second-century Christian writer Hegesippus.