Nun and Reformer of the Church, 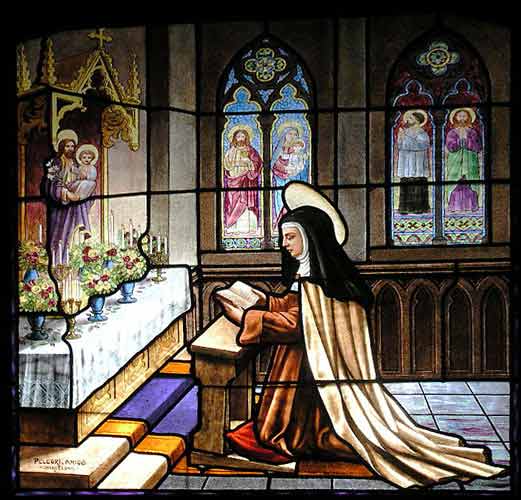 Church window at the Convent of St Teresa (located in Ávila, Spain)

O God, who by thy Holy Spirit didst move Teresa of Avila to Manifest to thy Church the way of perfection: Grant us, we beseech thee, to be nourished by her excellent teaching, and enkindle within us a lively and unquenchable longing for true holiness; through Jesus Christ, the joy of loving hearts, who with thee and the same Holy Spirit liveth and reigneth, one God, for ever and ever. Amen.

Almighty God, who, when the hearts of thy people have waxen Cold, dost send thy Spirit to rekindle the flame of thy love in their hearts, and dost raise up faithful ministers to recall thy people to their former devotion and service: Mercifully grant that we, following the teaching and example of Teresa of Avila and others, may be filled with thy Holy Spirit, may be aflame with zeal for thy glory and love for thy goodness and hunger for thy love, and that our feet may be set upon the path that leads to true holiness; the which we ask through Jesus Christ our Lord, who liveth and reigneth with thee and the same Holy Spirit, one God, now and ever. Amen.

Teresa de Cepeda y Ahumada (later known as Teresa de Jesus) was born in Avila, Spain, 28 March 1515, one of ten children whose mother died when she was fifteen. Her family was of partly Jewish ancestry. Teresa, having read the letters of Jerome, decided to become a nun, and when she was 20, she entered the Carmelite convent in Avila. There she fell seriously ill, was in a coma for a while, and partially paralyzed for three years. In her early years as a nun, she was, by her account, assiduous in prayer while sick but lax and lukewarm in her prayers and devotions when the sickness had passed. However, her prayer life eventually deepened, she began to have visions and a vivid sense of the presence of God, and was converted to a life of extreme devotion.

In 1560 she resolved to reform the monastery that had, she thought, departed from the order's original intention and become insufficiently austere. Her proposed reforms included strict enclosure (the nuns were not to go to parties and social gatherings in town, or to have social visitors at the convent, but to stay in the convent and pray and study most of their waking hours) and discalcing (literally, taking off one's shoes, a symbol of poverty, humility, and the simple life, uncluttered by luxuries and other distractions). In 1562 she opened a new monastery in Avila, over much opposition in the town and from the older monastery. At length Teresa was given permission to proceed with her reforms, and she travelled throughout Spain establishing seventeen houses of Carmelites of the Strict (or Reformed) Observance (the others are called Carmelites of the Ancient Observance). The reformed houses were small, poor, disciplined, and strictly enclosed. Teresa died 4 October 1582. (She is commemorated on the 15th--why not the 14th, I wonder--because the Pope changed the calendar from the Julian to the Gregorian system, a difference of 10 days, on the day after her death.) 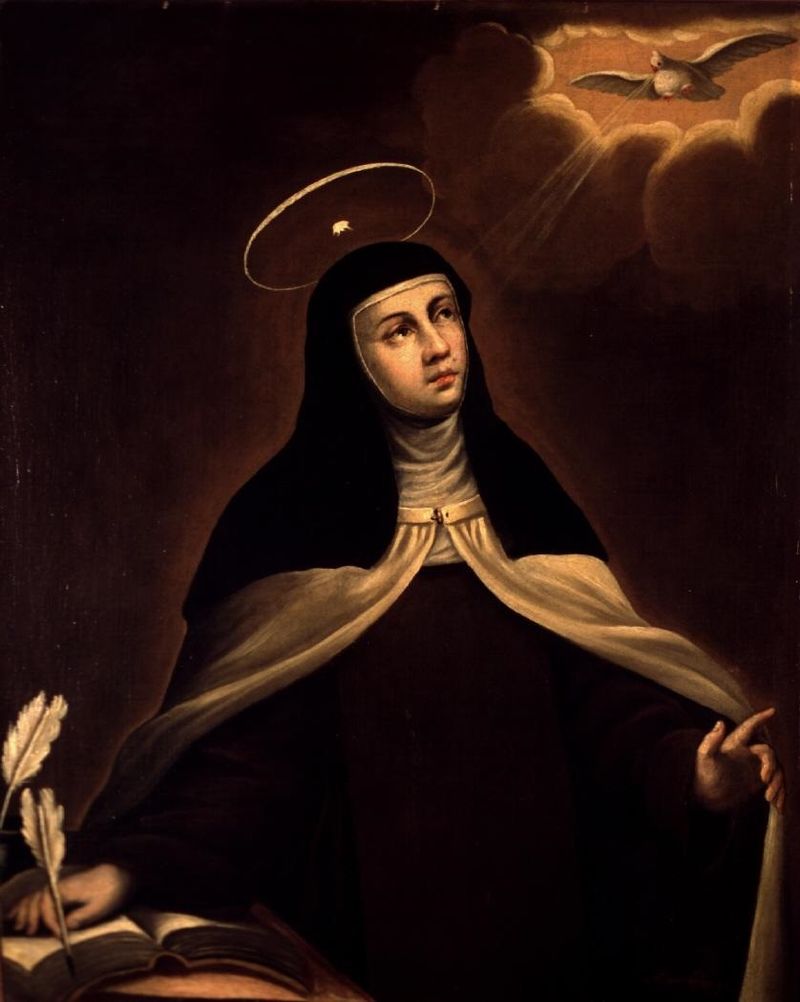 Teresa is reported to have been very attractive in person, witty, candid, and affectionate. She is remembered both for her practical achievements and organizing skill and for her life of contemplative prayer. Her books are read as aids to the spiritual life by many Christians of all denominations. Her Life is her autobiography to 1562; the Way of Perfection is a treatise on the Christian walk, written primarily for her sisters but of help to others as well; The Book of Foundations deals with establishing, organizing and overseeing the daily functioning of religious communities; The Interior Castle (or The Castle of the Soul) deals with the life of Christ in the heart of the believer. Most of these are available in paperback. 31 of her poems and 458 of her letters survive. Her feast day in the Roman Catholic Church is 15 October. The Lutheran Church (Elca) commemorates her on December 14 together with St. John of the Cross.

Christ has no body now but yours

No hands, no feet on earth but yours

Yours are the eyes through which He looks

compassion on this world

Christ has no body now on earth but yours.