Hymn-writer and Teacher of the Faith, 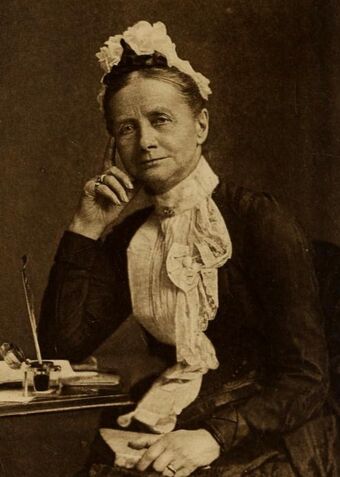 Almighty God, by your Holy Spirit you have made us one with your saints in heaven and on earth: Grant that in our earthly pilgrimage we may always be supported by this fellowship of love and prayer, and know ourselves to be surrounded by their witness to your power and mercy; for the sake of Jesus Christ, in whom all our intercessions are acceptable through the Spirit, and who lives and reigns with you and the same Spirit, one God, for ever and ever. Amen.

"Cecil Frances Alexander (April 1818 – 12 October 1895[1]) was an Anglo-Irish hymnwriter and poet. Amongst other works, she wrote 'All Things Bright and Beautiful', 'There Is a Green Hill Far Away'and the Christmas carol 'Once in Royal David's City'... [which] are known by Christians the world over, as is her rendering of 'Saint Patrick's Breastplate'." [2] "Her book Hymns for Little Children reached its 69th edition before the close of the 19th century." [3]

"Alexander was involved in charitable work for much of her life. Money from her first publications had helped build the Derry and Raphoe Diocesan Institution for the Deaf and Dumb, which was founded in Strabane in 1846. The profits from Hymns for Little Children were also donated to the school. She was involved with the Derry Home for Fallen Women, and worked to develop a district nurses service. She was an 'indefatigable visitor to poor and sick'. She was criticised, however, for her endorsement of the class system, as expressed, for example, in the original third verse of 'All Things Bright and Beautiful':

The rich man in his castle,

The poor man at his gate,

God made them high and lowly,

And ordered their estate." [4] 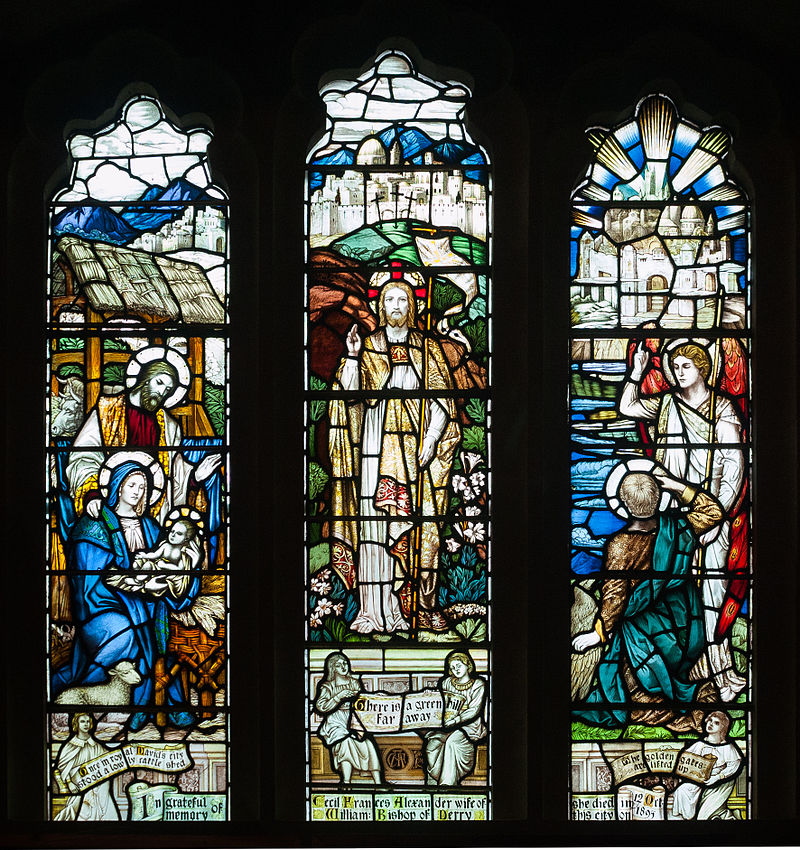 "In 1913, after the death of her husband in 1911, a stained glass window by James Powell and Sons in her memory was installed in the north vestibule of St Columb's Cathedral in Derry, Northern Ireland, financed by public subscription. The three lights of the windows refer to three of her hymns and show corresponding scenes: 'Once in Royal David's City', 'There Is a Green Hill Far Away', and 'The Golden Gates Are Lifted Up'. One of her beautiful works was called the Fieldmouse. It is a 4 stanza poem." [5]

[1] Sean, F. (2019, October 09). For All the Saints, Cecil Frances Alexander, Hymn-writer and Teacher of the Faith. Retrieved September 22, 2020, from https://www.stjohnscanton.org/for-all-the-saints-cecil-frances-alexander-hymn-writer-and-teacher-of-the-faith/