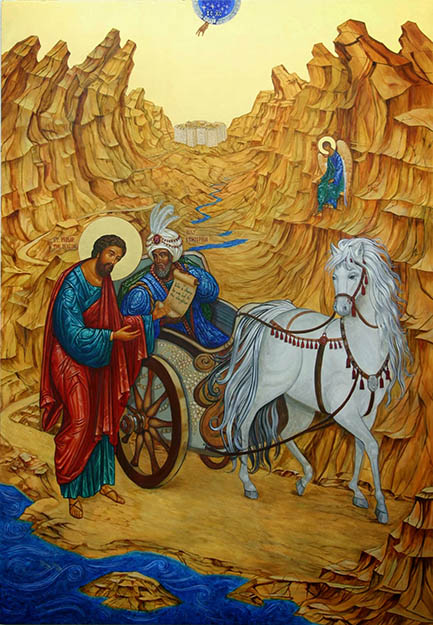 Almighty and everlasting God, we thank thee for thy servant Philip the Deacon, whom thou didst call to preach the Gospel to the peoples of Samaria and Ethiopia. Raise up, we beseech thee, in this and every land heralds and evangelists of thy kingdom, that thy Church may make known the immeasurable riches of our Saviour Jesus Christ, who liveth and reigneth with thee and the Holy Spirit, now and for ever. 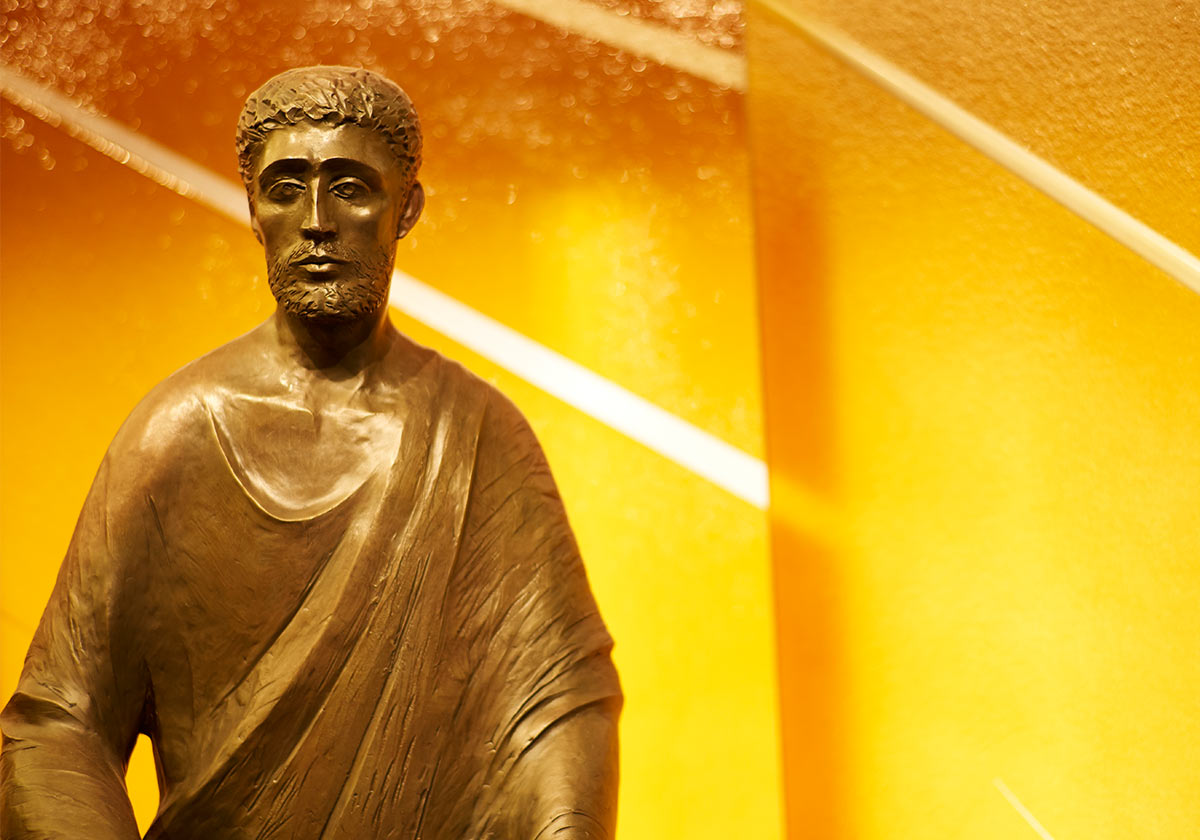 In the sixth chapter of Acts, we read that the Apostles commissioned seven men in the congregation at Jerusalem to supervise the church's ministry to the needs of its widows and other poor. (This is generally considered to be the beginning of the office of Deacon in the Church, although the Scriptures do not use this term in referring to the original seven men.) Two of these have gained lasting fame. One was Stephen, who became the Church's first martyr. The other was Philip, whose story we find in Acts 8:5-40; 21:8-9.

After the death of Stephen, there was a general persecution of the Church at Jerusalem, and many Christians fled to escape it. Philip fled to Samaria, where he preached the Gospel to the Samaritans, a group who had split off from the Jewish people about six centuries earlier, had intermarried with other peoples, and were considered outsiders by most Jews. They received the message with eagerness, and soon Peter and John came to Samaria to bless the new converts.

After this, Philip was sent by God to walk along the road from Jerusalem southwest to Gaza, where he met a eunuch (a term meaning literally a castrated man, but also used to mean simply an official of a royal court) of the Queen of Ethiopia (probably meaning Nubia - -- what we now call the Sudan), returning home after worshipping in Jerusalem. The man was reading from Isaiah 53 ("He was wounded for our transgressions"), and Philip told him about Jesus, and persuaded him that the words were a prophecy of the saving work of Jesus. The man was baptized, and went on his way rejoicing, while Philip went north to Caesarea, the major seaport of Israel, and its secular capital. 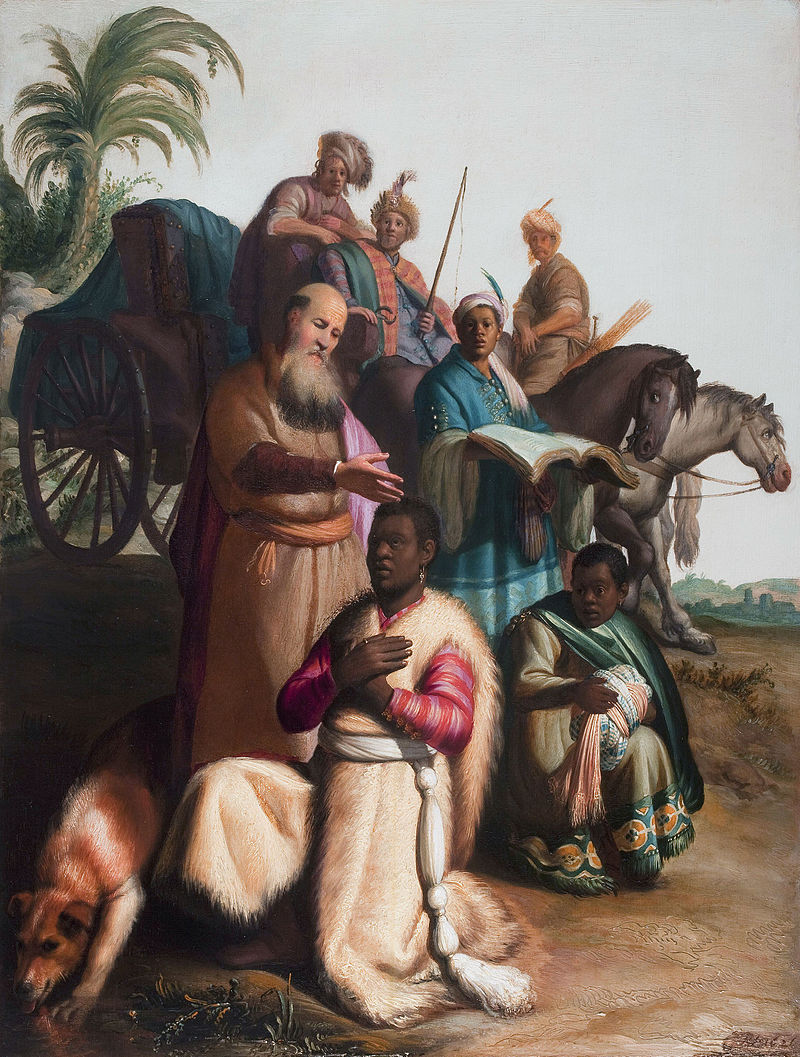 Rembrandt, The Baptism of the Eunuch, 1626, Museum Catharijneconvent, Utrecht

When Paul (accompanied by Luke) was going up to Jerusalem for the last time, he paused at Caesarea and spent several days with Philip. (This may be the source of some of the information Luke used in writing the early chapters of Acts.) We are told that Philip had four daughters who prophesied. (This is relevant to discussions of the role of women in the Church.)

Moreover, when Philip went to Samaria, and preached and made converts, he baptized them, but none of them received the Holy Spirit. It was not until Peter and John came from Jerusalem and laid hands on them that they received the Spirit. Surely this means that Philip was not an Apostle--not one of the Twelve.

Yes, they were the same person.

We have ancient testimony identifying them. Papias of Hierapolis, a second-century writer who had spoken with some of the apostles, speaks of the Philip of Acts 21 as one of the Apostles. Polycrates, a second-century bishop of Ephesus, says that Philip, "one of the Twelve", was buried at Hierapolis along with two aged virgin daughters of his, and that a third daughter, a prophetess, was buried at Ephesus. It seems unlikely that two Philips would both have unmarried daughters of whom at least one was known as a prophetess.

If eleven of the Twelve Apostles refused the work of administering the church's welfare program, but one, for special reasons, accepted it, it is not clear that Luke would have felt bound to point this out. The Jerusalem community may have thought it desirable to have one man serve both as one of the Twelve and one of the Seven, so as to provide a link, a liason, between the two groups. Philip, who specifically named in John's account of the feeding of the Five Thousand (John 6:5), is likely to have had special abilities in organizing the feeding of the hungry, and related matters. Moreover, the Seven were originally appointed because the Greek-speaking Jews complained that their widows were being neglected. Philip had a Greek name ("lover of horses"), which at least suggests some kind of Hellenistic element in his background. Even more to the point, we note that earlier, when a group of Greek-speaking Jews wanted a chance to speak with Jesus, they went first to Philip (Jn 12:20f). Clearly Philip was a good choice for dealing with Hellenists.

As for the objection that Philip's Samaritan converts receive the laying on of hands, not from Philip, but from Peter and John, it must be noted that Peter and John were there specifically as representatives of the Apostles gathered at Jerusalem. It may very well be that Philip wanted to make sure that the receiving of a group of Samaritans into the Church, a gesture certain to stir up violent emotions in some Christians, had the official support of the College of Apostles.

Reply ceableDam
11:14 AM on July 29, 2022
It is an obstetric emergency. buy cialis and viagra online Super Kamagra Billig