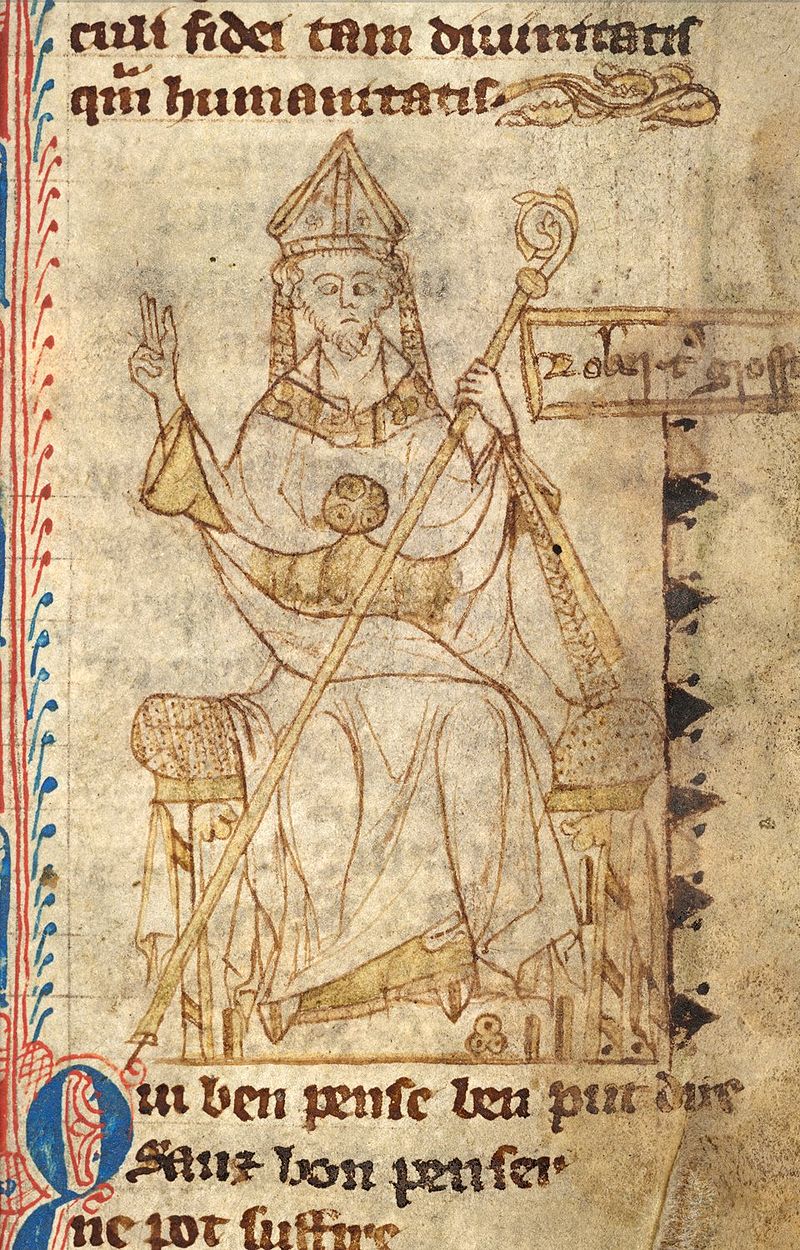 Portrait of Robert Grosseteste, Bishop of Lincoln, eyes crossed, seated with miter and crozier, his right hand raised in blessing.

O God our heavenly Father, who didst raise up thy faithful Servant Robert Grosseteste to be a bishop and pastor in thy Church and to feed thy flock: Give to all pastors abundant gifts of thy Holy Spirit, that they may minister in thy household as true servants of Christ and stewards of thy divine mysteries; through Jesus Christ our Lord, who liveth and reigneth with thee and the Holy Spirit, one God, now and for ever.

A 19th-century portrait of Robert Grosseteste in stained glass

"Had the leaders of the thirteenth century heeded this preacher, many of the disasters of the following three centuries might have been avoided. Robert was a peasant lad from Suffolk, born about 1175. He distinguished himself at Oxford in law, medicine, languages, natural sciences, and theology. He became what is now called Chancellor of Oxford University." [1]

"In 1235, he was elected Bishop of Lincoln, in area the largest diocese in England. He promptly visited all the churches in the diocese and quickly removed many of the prominent clergy because they were neglectng their pastoral duties. He vigorously opposed the practice by which the Pope appointed Italians as absentee clergy for English churches (collecting salaries from said churches without ever setting foot in the country). He insisted that his priests spend their time in the service of their people, in prayer, and in study. He went on a pilgrimage to Rome, where he spoke out boldly against ecclesiastical abuses. Back in England, he spoke against unlawful usurpations of power by the monarch, and was one of those present at the signing of the Magna Carta." [2]

"Grosseteste's scholarly writings embraced many fields of learning. He translated into Latin the Ethics of Aristotle and the theological works of John of Damascus and of the fifth-century writer known as Dionysius the Areopagite. He was skilled in poetry, music, architecture, mathematics, astronomy, optics, and physics (one of his pupils was Roger Bacon). His writings on the first chapter of Genesis include an interesting anticipation of modern cosmological ideas. (He read that the first thing created was light, and said that the universe began with pure energy exploding from a point source.) He knew Hebrew and Greek, and his Biblical studies were a notable contribution to the scholarship of the day." [3]