Priest, Translator of the Bible, 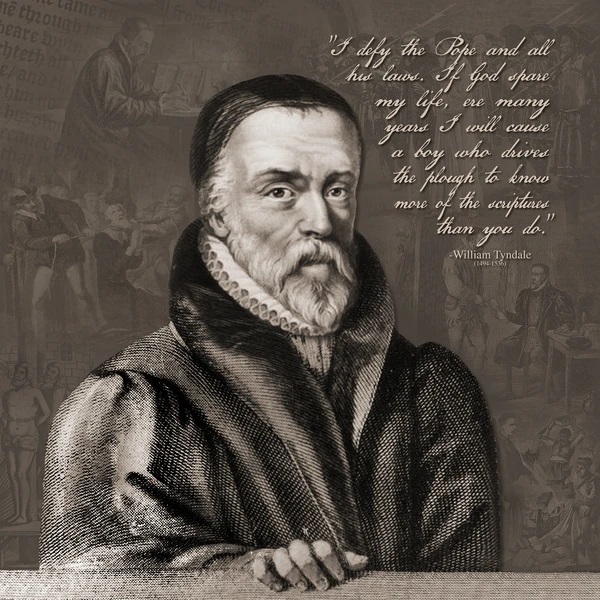 Almighty God, who didst give to thy servant William Tyndale boldness to confess the name of our Saviour Jesus Christ before the rulers of this world, and courage to die for this faith: Grant that we may also be ever ready to give a reason for the hope that is in us, and to suffer gladly for the sake of our Lord Jesus Christ, who liveth and reigneth with thee and the Holy Spirit, one God, for ever and ever. Amen.

Almighty God, who didst plant in the heart of thy servant William Tyndale a consuming passion to bring the Scriptures to the people in their native tongue, and didst endow him with the gift of powerful and graceful expression and with strength to persevere against all obstacles: Reveal to us, we pray thee, thy saving Word, as we read and study the Scriptures, and hear them calling us to repentance and life; through Jesus Christ our Lord, who liveth and reigneth with thee and the Holy Spirit, one God, for ever and ever. Amen. 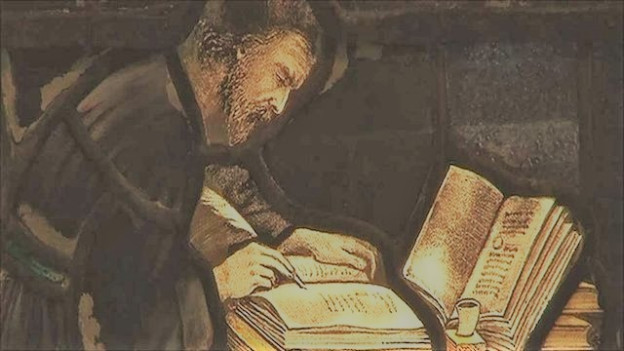 "William Tyndale was born about 1495 at Slymbridge near the Welsh border. He received his degrees from Magdalen College, Oxford, and also studied at Cambridge. He was ordained to the priesthood in 1521, and soon began to speak of his desire, which eventually became his life's obsession, to translate the Scriptures into English. It is reported that, in the course of a dispute with a promminent clergyman who disparaged this proposal, he said, "If God spare my life, ere many years I will cause a boy that driveth the plow to know more of the Scriptures than thou dost." The remainder of his life was devoted to keeping that vow, or boast. Finding that the King, Henry VIII, was firmly set against any English version of the Scriptures, he fled to Germany (visiting Martin Luther in 1525), and there travelled from city to city, in exile, poverty, persecution, and constant danger. Tyndale understood the commonly received doctrine -- the popular theology -- of his time to imply that men earn their salvation by good behavior and by penance. He wrote eloquently in favor of the view that salvation is a gift of God, freely bestowed, and not a response to any good act on the part of the receiver. His views are expressed in numerous pamphlets, and in the introductions to and commentaries on various books of the Bible that accompanied his translations. He completed his translation of the New Testament in 1525, and it was printed at Worms and smuggled into England. Of 18,000 copies, only two survive. In 1534, he produced a revised version, and began work on the Old Testament. In the next two years he completed and published the Pentateuch and Jonah, and translated the books from Joshua through Second Chronicles, but then he was captured (betrayed by one he had befriended), tried for heresy, and put to death. He was burned at the stake, but, as was often done, the officer strangled him before lighting the fire. His last words were, 'Lord, open the King of England's eyes.'" [1] 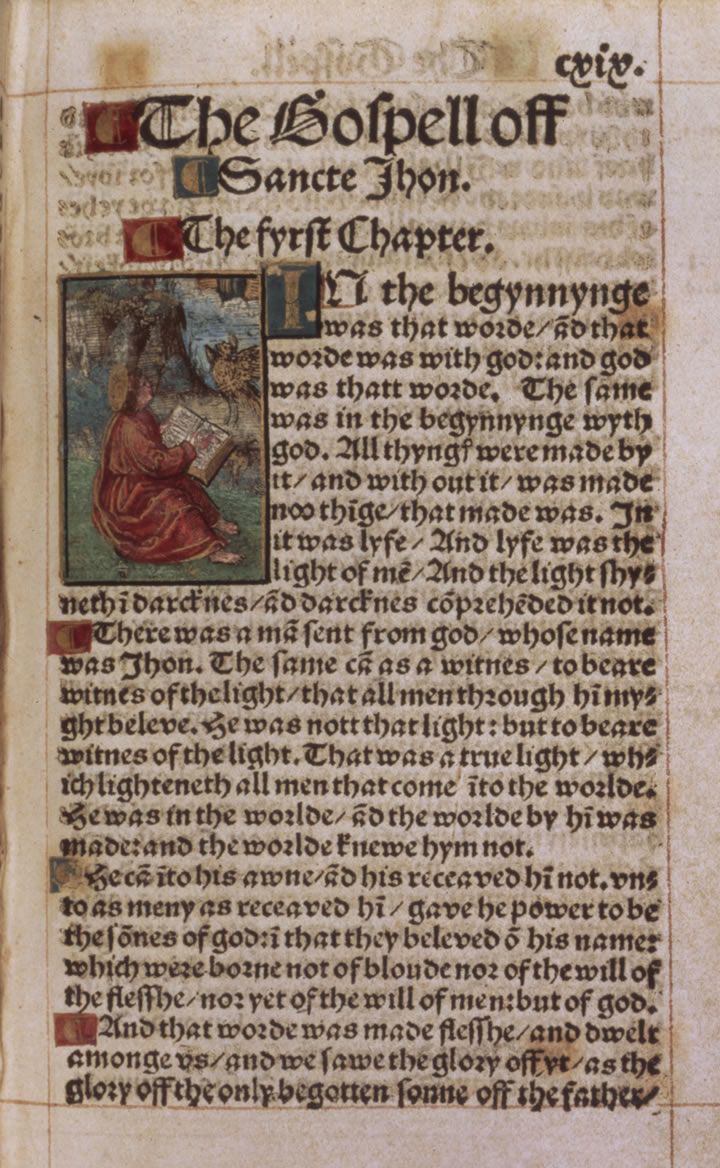 The beginning of the Gospel of John, from Tyndale's 1525 translation of the New Testament.

"Miles Coverdale continued Tyndale's work by translating those portions of the Bible (including the Apocrypha) which Tyndale had not lived to translate himself, and publishing the complete work. In 1537, the "Matthew Bible" (essentially the Tyndale-Coverdale Bible under another man's name to spare the government embarrassment) was published in England with the Royal Permission. Six copies were set up for public reading in Old St Paul's Church, and throughout the daylight hours the church was crowded with those who had come to hear it. One man would stand at the lectern and read until his voice gave out, and then he would stand down and another would take his place. All English translations of the Bible from that time to the present century are essentially revisions of the Tyndale-Coverdale work." [2]