Missionary to the Franks, 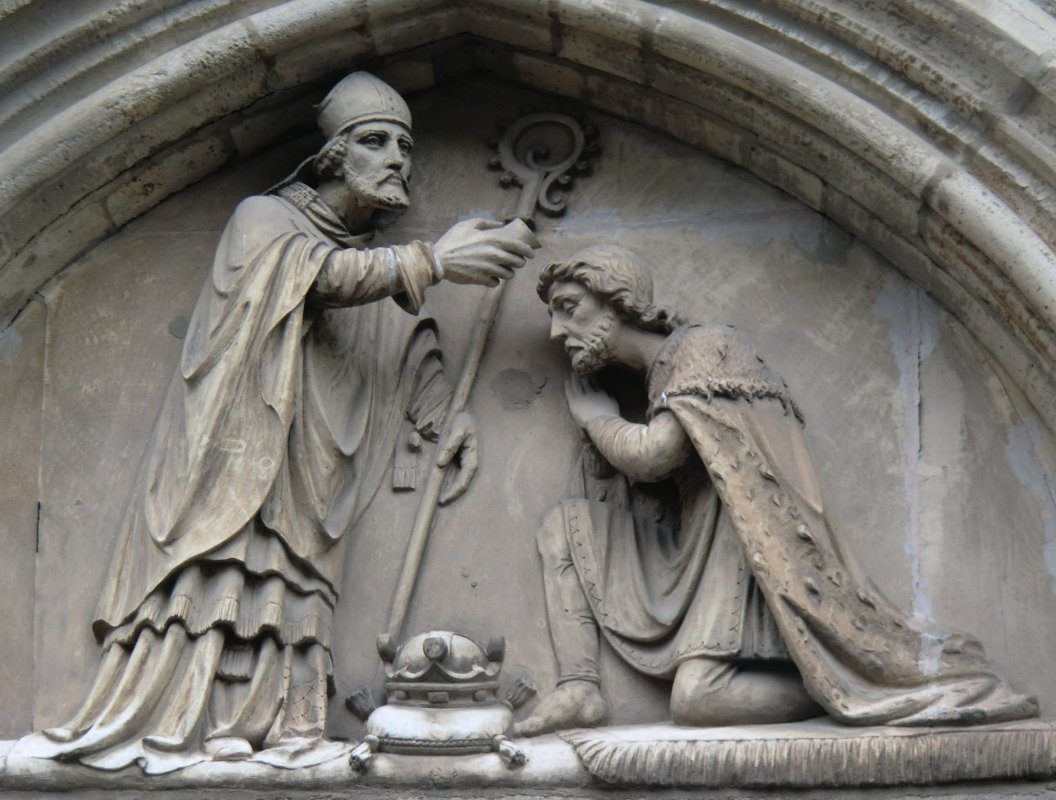 Relief on the Remigius Church in Bergheim an der Erft

O God, who by the teaching of thy faithful servant and bishop Remigius [and the loving influence and example of thy handmaid Clotilda] didst turn the nation of the Franks from vain idolatry to the worship of thee, the true and living God, in the fullness of the catholic faith; Grant that we who glory in the name of Christian may show forth our faith in worthy deeds; through Jesus Christ our Lord, who liveth and reigneth with thee and the Holy Spirit, one God, for ever and ever. 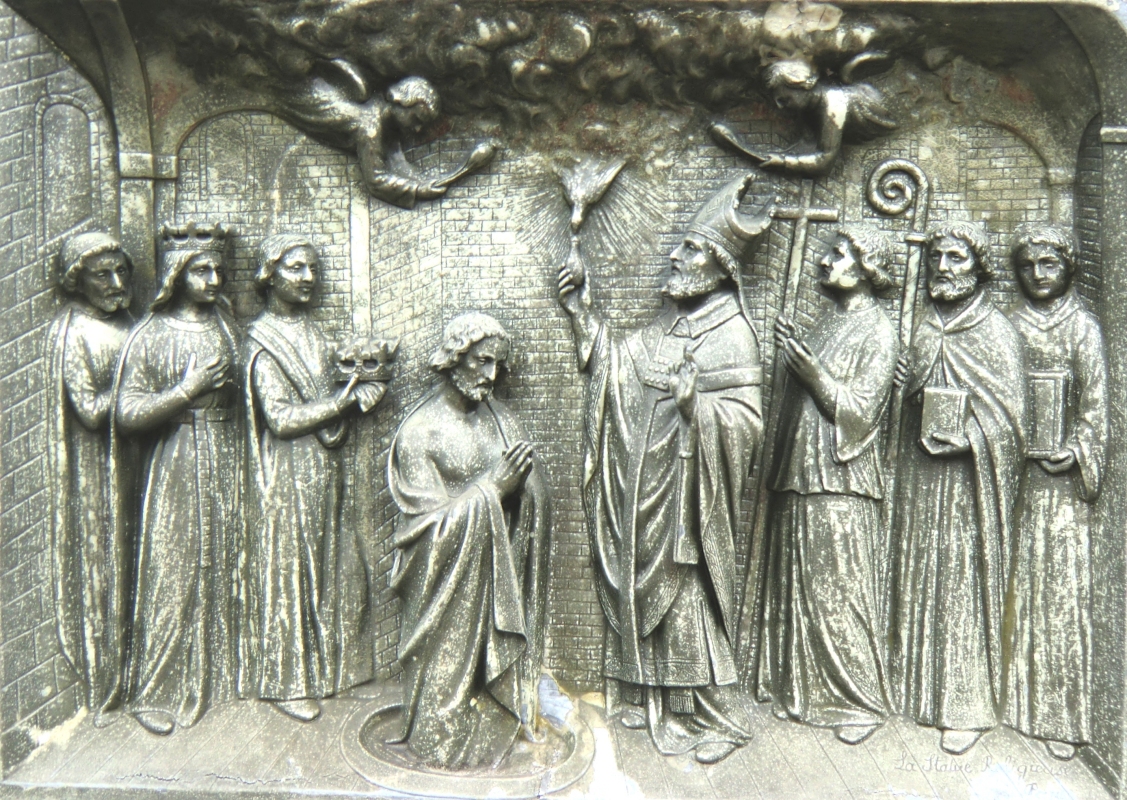 Relief: the dove brings Remigius the chrism oil , 1871, at the entrance to the Basilica of the Immaculate Conception of Mary

"Remi (Latin Remigius) was born about 438 and became bishop of Rheims about 460, at the remarkably young age of 22. (Both he and the city were named for his tribe, the Remi.) In his time, the Roman Empire and the Christian church were jointly faced with a serious practical problem -- the barbarian invasions. A series of droughts in central Asia had driven its inhabitants out in all directions in search of more livable territory. This brought the Goths, for example, across the Danube in the early 300's. Now the Emperor Constantine had died in 337, and during his lifetime the Church had debated the question of whether the Logos, the Word who was made flesh for our salvation in the person of Jesus of Nazareth, was (as Arius taught) the first and greatest of the beings created by God, but nevertheless not eternal, and not God; or was (as Athanasius taught) fully God, co-eternal and co-equal with the Father. At the Council of Nicea in 325, the Athanasian position had been endorsed by an overwhelming majority of the bishops assembled from throughout the Christian world. But the Arians refused to accept the decision, and there were attempts to re-negotiate and find a compromise that would make everyone happy. Then Constantine died, and his Empire was divided among his sons, with Constantius Emperor of the East, and eventually of the whole Empire. And Constantius was an Arian, and made a serious attempt to stamp out the Athanasian position by banishing its leaders and pressuring churches into electing or accepting Arian bishops. During his reign, missionaries, led by one Bishop Ulfilas, were sent to convert the Goths. And naturally, Ulfilas was an Arian. He preached with great vigor and eloquence among the Goths, and translated the Bible into their language (omitting, we are told, the wars of the Hebrews, on the grounds that the Goths were quite warlike enough without further encouragement). In fact, the portions of his translation that have survived are the only material we have in the Gothic language, and as such are highly valued by students of the history of languages. So the Goths became Arian Christians, and so did the Vandals. And these two highly warlike peoples were most of the time either making war on the settled peoples of the Empire or hiring out as mercenaries to defend the borders of the Empire from the next wave of invaders. You may remember that Ambrose, bishop of Milan (died 397, remembered 7 December), was commanded by the Empress Mother to hand over a church for the use of her soldiers, who were Goths and Arians, and that Ambrose refused, and filled the church with members of his congregation, who sang hymns composed by Ambrose for the occasion, and the soldiers did not attack. You may also remember that when Augustine lay on his deathbed in his town of Hippo in North Africa (near Carthage or modern Tunis), the city was under attack by Vandal troops, who had come into Africa out of Spain, and who captured and vandalized (that is where we get the term) the cities of North Africa, and Sicily and Sardinia and Corsica (which they made into bases for piracy) and the southern part of Italy. Long after Arianism had died out elsewhere, it was the religion of the Goths and Vandals and related peoples, and being an Arian was the mark of a good Army man." [1]

"Now a new people appeared on the scene, a pagan warrior tribe called the Franks. In the late 400's, they were led by a chief called Clovis, a pagan but married to a Christian wife, Clotilda. His wife and Bishop Remi (remember him?) spoke to him about the Christian faith, but he showed no particular signs of interest until one day when he was fighting a battle against the Alemanni, and was badly outnumbered and apparently about to lose the battle. He took a vow that if he won, he would turn Christian. The tide of battle turned, and he won. Two years later, he kept his vow and was baptized by Remi at Rheims on Christmas Day, 496, together with about 3000 of his followers. (Rheims became the traditional and "proper" place for a French king to be crowned, as we learn from the story of Joan of Arc. It remained so until the French Revolution.) Now Clovis was converted to the Athanasian (or orthodox, or catholic) faith rather than the Arian, and this fact changed the religious history of Europe. The clergy he brought to his court were catholic, and when the Franks as a whole became Christians, which did not happen overnight, they became catholic Christians, meaning in this context that they were Athanasian rather than Arian, and accepted the belief that it was God himself, and not a particularly prominent angel, who came down from heaven and suffered for our salvation. During the preceding century, the Arians had had a near-monopoly on military power, and now this was no longer true. The conversion of the Franks brought about the conversion of the Visigoths, and eventually (about 300 years later) the empire of Charlemagne and the beginning of the recovery of Western Europe from the earlier collapse of government and of city life under the impact of plague, lead poisoning, currency inflation, confiscatory taxation, multiple invasions, and the assorted troubles of the Dark Ages." [2]