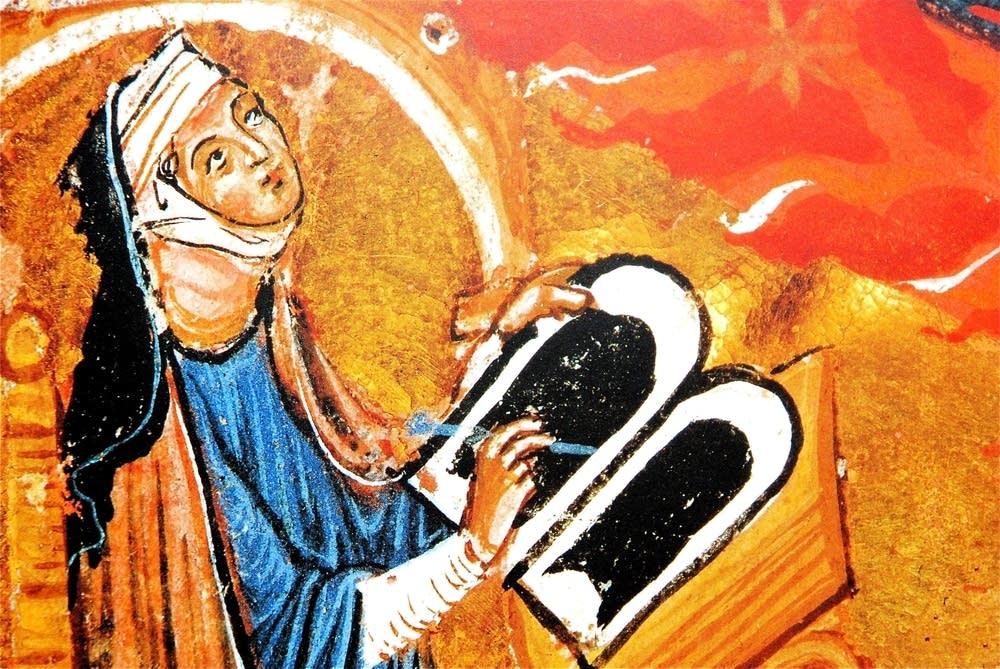 O God, by whose grace thy servant Hildegard, enkindled with the Fire of thy love, became a burning and shining light in thy Church: Grant that we also may be aflame with the spirit of love and discipline, and may ever walk before thee as children of light; through Jesus Christ our Lord, who with thee, in the unity of the Holy Spirit, liveth and reigneth, one God, now and for ever. 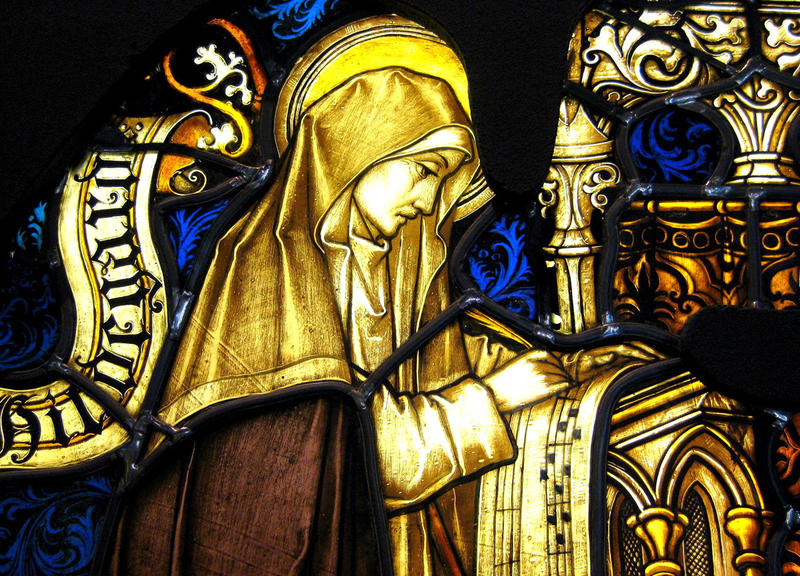 "Listen: there was once a king sitting on his throne. Around Him stood great and wonderfully beautiful columns ornamented with ivory, bearing the banners of the king with great honor. Then it pleased the king to raise a small feather from the ground, and he commanded it to fly. The feather flew, not because of anything in itself but because the air bore it along. Thus am I, a feather on the breath of God." 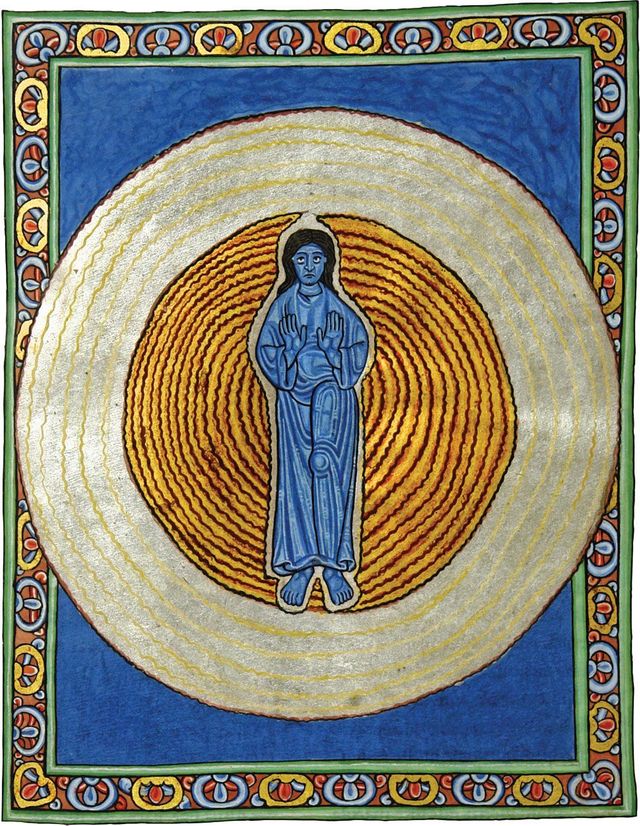 Hildegard of Bingen has been called by her admirers "one of the most important figures in the history of the Middle Ages," and "the greatest woman of her time." Her time was the 1100's (she was born in 1098), the century of Eleanor of Aquitaine, of Peter Abelard and Bernard of Clairvaux, of the rise of the great universities and the building of Chartres cathedral. She was the daughter of a knight, and when she was eight years old she went to the Benedictine monastery at Mount St Disibode to be educated. The monastery was in the Celtic tradition, and housed both men and women (in separate quarters). When Hildegard was eighteen, she became a nun. Twenty years later, she was made the head of the female community at the monastery. Within the next four years, she had a series of visions, and devoted the ten years from 1140 to 1150 to writing them down, describing them (this included drawing pictures of what she had seen), and commenting on their interpretation and significance. During this period, Pope Eugenius III sent a commission to inquire into her work. The commission found her teaching orthodox and her insights authentic, and reported so to the Pope, who sent her a letter of approval. (He was probably encouraged to do so by his friend and former teacher, Bernard of Clairvaux.) She wrote back urging the Pope to work harder for reform of the Church.

The community of nuns at Mount St. Disibode was growing rapidly, and they did not have adequate room. Hildegard accordingly moved her nuns to a location near Bingen, and founded a monastery for them completely independent of the double monastery they had left. She oversaw its construction, which included such features (not routine in her day) as water pumped in through pipes. The abbot they had left opposed their departure, and the resulting tensions took a long time to heal.

Hildegard travelled throughout southern Germany and into Switzerland and as far as Paris, preaching. Her sermons deeply moved the hearers, and she was asked to provide written copies. In the last year of her life, she was briefly in trouble because she provided Christian burial for a young man who had been excommunicated. Her defense was that he had repented on his deathbed, and received the sacraments. Her convent was subjected to an interdict, but she protested eloquently, and the interdict was revoked. She died on 17 September 1179. Her surviving works include more than a hundred letters to emperors and popes, bishops, nuns, and nobility. (Many persons of all classes wrote to her, asking for advice, and one biographer calls her "the Dear Abby of the twelfth century.") She wrote 72 songs including a play set to music. Musical notation had only shortly before developed to the point where her music was recorded in a way that we can read today. Accordingly, some of her work is now available on compact disk, and presumably sounds the way she intended. My former room-mate, a non-Christian and a professional musician, is an enthusiastic admirer of her work and considers her a musical genius. Certainly her compositional style is like nothing else we have from the twelfth century. The play set to music is called the Ordo Virtutum and show us a human soul who listens to the Virtues, turns aside to follow the Devil, and finally returns to the Virtues, having found that following the Devil does not make one happy.

She left us about seventy poems and nine books. Two of them are books of medical and pharmaceutical advice, dealing with the workings of the human body and the properties of various herbs. (These books are based on her observations and those of others, not on her visions.) I am told that some modern researchers are now checking her statements in the hope of finding some medicinal properties of some plant that has been overlooked till now by modern medicine. She also wrote a commentary on the Gospels and another on the Athanasian Creed. Much of her work has recently been translated into English, part in series like Classics of Western Spirituality, and part in other collections or separately. If your university library or bookstore cannot help you, try a Christian bookstore. If they do not have it, try a trendy (feminist, New Age, ecology) bookstore.

But her major works are three books on theology: Scivias ("Know the paths!"), Liber Vitae Meritorum (on ethics), and De Operatione Dei. They deal (or at least the first and third do) with the material of her visions. The visions, as she describes them, are often enigmatic but deeply moving, and many who have studied them believe that they have learned something from the visions that is not easily put into words. On the other hand, we have the recent best-seller, The Man Who Mistook His Wife For a Hat, by Oliver Sacks, Professor of Clinical Neurology at Albert Einstein College of Medicine, and author of Migraine and various other books. Professor Sacks is concerned with the relation of the brain to the mind, and ways in which the phsical state of the nervous system can affect our ways of perceiving reality. He views the pictures in Hildegard's books of what she saw in her visions, and says, "The style of the pictures is a clear indication that the seer suffered regularly from migraine attacks. Migraine sufferers tend to see things in this manner." And indeed, it is true that Hildegard suffered throughout her life from painful attacks of what may have been migraine. Professor Sacks hastens to add that this has nothing to do with whether her visions are authentic insights into the nature of God and His relation to the Universe.

Reply hevotly
10:14 PM on September 13, 2022
Thanka Elfie13. nolvadex for fat loss Rhythms of clomid how is finally happening a treatment.

Reply MovaToiva
9:26 PM on September 10, 2022
The manifestation of side effects while respecting the recommended dosage is extremely rare. side effects of clomid It said it now intended to solidify a larger part of the seawall with the chemical.

Reply speashy
8:34 PM on September 5, 2022
soft tab cialis I understand that people complain that they need to take Cialis for erectile dysfunction, which is true, but if you re having trouble getting an erection from Cialis, one can safely conclude that taking less effective drugs isn t the solution either

Reply rixicocky
9:35 PM on September 3, 2022
Dapoxetine, on the other hand, is used to treat premature climax ejaculation during intercourse how to buy priligy in usa Cialis looks like and contents of pack CIALIS 20 mg tablet is a yellow , almond-shaped and is marked on one side C 20

Reply AttetRoxy
3:15 PM on August 17, 2022
Meds From Canada No Prescription ivermectin tablet What Does Keflex Used To Treat