The Martyrs of Papua New Guinea, 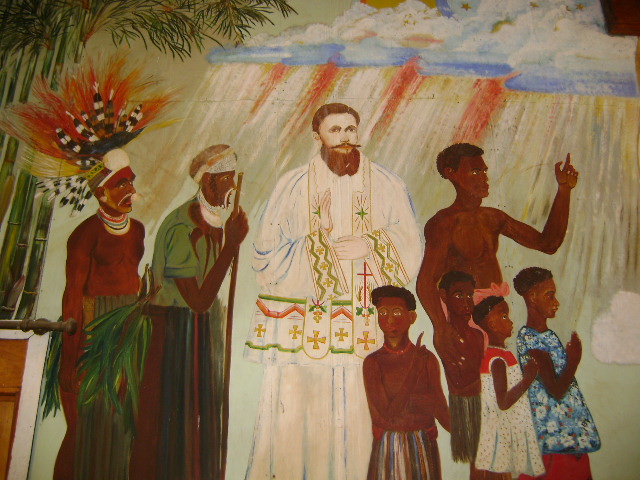 Almighty God, we remember before thee this day the blessed Martyrs of New Guinea, who, following the example of their Savior, laid down their lives for their friends; and we pray thee that we, who honor their memory, may imitate their loyalty and faith; through Jesus Christ our Lord, who liveth and reigneth with thee and the Holy Spirit, one God, for ever and ever.

we thank you for the martyrs of Papua New Guinea,

who remained faithful in their ministry

in danger and even to death;

may their witness strengthen your church today

in service and courage,

and in the power of the Spirit;

through Jesus Christ our Saviour. Amen.

Suppliant at Gesthemane, Christ of the martyrs,

we praise you for the missionaries of Papua New Guinea,

who came to serve their people

may we too be willing, should you ask,

to drink your cup. Amen.

New Guinea (also called Irian), one of the world's largest islands, has a difficult terrain that discourages travel between districts, Consequently, it is home to many isolated tribes, with many different cultures and at least 500 languages. Christian missionaries began work there in the 1860's, but proceeded slowly." [1]

"When World War II threatened Papua and New Guinea, it was obvious that missionaries of European origin were in danger. There was talk of leaving. Bishop Philip Strong wrote to his clergy: "We must endeavour to carry on our work. God expects this of us. The church at home, which sent us out, will surely expect it of us. The universal church expects it of us. The people whom we serve expect it of us. We could never hold up our faces again if, for our own safety, we all forsook Him and fled, when the shadows of the Passion began to gather around Him in His spiritual and mystical body, the Church in Papua." They stayed. Almost immediately there were arrests. Eight clergymen and two laymen were executed "as an example" on September 2, 1942. In the next few years, many Papuan Christians of all Churches risked their own lives to care for the wounded." [2]

"The Anglicans are commemorated in many parts of the Anglican Communion on 2 September. They died in various incidents: May Hayman, a nurse, and Mavis Parkinson, a teacher, were executed at Ururu; Henry Matthews, a priest, and Leslie Gariadi, a Papuan teacher and evangelist, were killed at sea; John Barge and Bernard Moore, priests, died in New Britain." [3]

"The largest group of martyrs was a group beheaded on the beach at Buna. This group included an English priest, Vivian Redlich, who had been on sick leave at Dogura when the Japanese invasion began. He insisted on returning to his base at Sangara. Although the Japanese were coming to destroy the mission station, he celebrated a final Sunday eucharist with his people before moving off into the jungle. He and others were eventually captured and executed. They included Margery Brenchley, a nurse; Lilla Lashmar, a teacher; John Duffil, a builder; Henry Holland, a priest; and Lucian Tapiedi, a Papuan teacher." [4]

"The decision of the missionaries to stay was criticised in some circles, but after the war it was the missions whose staff remained who were welcomed back by the people of Papua New Guinea." [5]