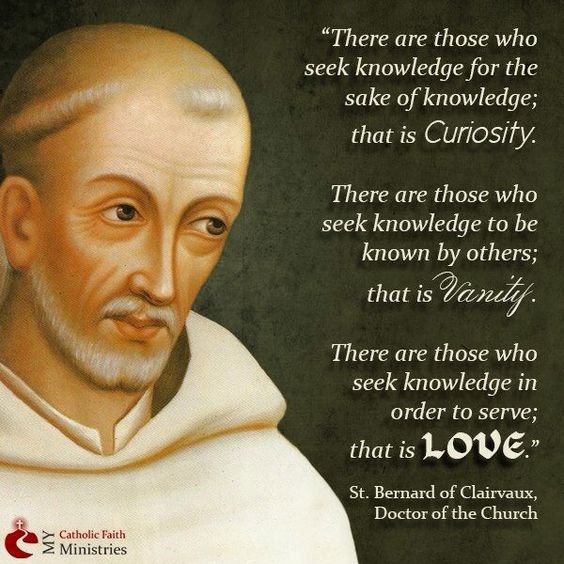 O God, by whose grace thy servant Bernard of Clairvaux, Enkindled with the fire of thy love, became a burning and a shining light in thy Church: Grant that we also may be aflame with the spirit of love and discipline, and may ever walk before thee as children of light; through Jesus Christ our Lord, who with thee, in the unity of the Holy Spirit, liveth and reigneth, one God, now and for ever. 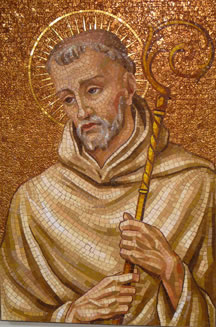 Bernard, third son of a Burgundian nobleman, was born in 1090. His brothers were trained as soldiers, but Bernard from youth was destined for scholarship. One Christmas Eve as a child he had a dream about the infant Christ in the manger; and the memory of it, and consequent devotion to the mystery of the Word made flesh, remained with him throughout his life.

Bernard had good prospects of success as a secular scholar, but he began to believe that he was called to the monastic life, and after a period of prayer for guidance, he decided at age 22 to enter the monastery of Citeaux (Latin Cistercium, appearing on modern maps as Corcelles-les-Citeaux, 47:10 N 5:05 E), an offshoot of the Benedictines which had adopted a much stricter rule than theirs, and became the founding house of the Cistercian (Trappist) order. (Actually, the Trappists are a reformed (i.e. stricter) offshoot of the Cistercians, who are a stricter offshoot of the Benedictines.) He persuaded four of his brothers, one uncle, and 26 other men to join him. They were the first novices that Citeaux had had for several years. After three years, the abbot ordered Bernard to take twelve monks and found a new house at La Ferte. The first year was one of great hardship. They had no stores and lived chiefly on roots and barley bread. Bernard imposed such severe discipline that his monks became discouraged, but he realized his error and became more lenient. The reputation of the monastery, known as Clairvaux (48:09 N 4:47 E), spread across Europe. Many new monks joined it, and many persons wrote letters or came in person to seek spiritual advice. By the time of his death, 60 new monasteries of the Cistercian order were established under his direction.

For four years after 1130 Bernard was deeply involved with a disputed papal election, championing the claims of Innocent II against his rival Anacletus II. He travelled throughout France, Germany, and Italy mustering support for his candidate (and, it should be added, preaching sermons denouncing injustices done to Jews), and returned from one of these journeys with Peter Bernard of Paganelli as a postulant for the monastery. The future Pope Eugenius III spent the next year stoking the monastery fires. Years later, Bernard wrote a major treatise of advice to Eugenius on the spiritual temptations of spiritual power.

The papal election was not the only dispute in which Bernard became involved. He was highly critical of Peter Abelard, one of the most brilliant theologians of the day (see 21 April). Bernard believed that Abelard was too rationalistic in his approach, and failed to allow sufficiently for the element of mystery in the faith. When Abelard rejected some of the ways of stating Christian doctrines to which Bernard was accustomed, Bernard concluded, perhaps too hastily, that this was equivalent to rejecting the doctrine itself. A conference was scheduled at Sens (48:12 N 3:18 E), where Abelard's views were to be examined, but soon after it began Abelard decided that he was not about to get a fair hearing, announced that he was appealing to Rome, and left. He set out for Rome and got as far as Cluny, where he stopped. Peter the Venerable, the abbot (see 30 April), was a friend of both Abelard and Bernard, and managed to reconcile them before they died.

One of Bernard's most influential acts, for better or worse, was his preaching of the Second Crusade. The First Crusade had given the Christian forces control of a few areas in Palestine, including the city of Edessa. When Moslem forces captured Edessa (37:08 N 38:46 E, now called Urfa and located in eastern Turkey) in 1144, King Louis VII of France (not to be confused with St. Louis IX, also a Crusader, but more than a century later) was eager to launch a crusade to retake Edessa and prevent a Moslem recapture of Jerusalem (31:47 N 35:13 E). He asked Bernard for help, and Bernard refused. He then asked the Pope to order Bernard to preach a Crusade. The pope gave the order, and Bernard preached, with spectacular results. Whole villages were emptied of able-bodied males as Bernard preached and his listeners vowed on the spot to head for Palestine and defend the Sacred Shrines with their lives.

The preaching of the Crusade had an ugly side-effect. In the Rhineland, a monk named Raoul wandered about telling crowds that if they were going to fight for the faith, the logical first step was to kill the Jews who were near at hand. There were anti-Jewish riots in Mainz (50:00 N 8:16 E, in the Rhineland), where the archbishop sheltered the Jews, or many of them, in his palace, and sent an urgent message to Bernard to come before both he and they were killed. Bernard came. He called Raoul arrogant and without authority, a preacher of mad and heretical doctrines, a liar and a murderer. Then he he got nasty. Raoul sneaked off the scene, and the riots were over. From that day to this, Bernard has been remembered among Rhineland Jews and their descendants as an outstanding example of a "righteous Gentile," and many of them (e.g. Bernard Baruch) bear his name.

As for the Crusade, things went wrong from the start. The various rulers leading the movement were distrustful of one another and not disposed to work together. Of the soldiers who set out (contemporary estimates vary from 100,000 to 1,500,000), most died of disease and starvation before reaching their goal, and most of the remainder were killed or captured soon after their arrival. The impact on Bernard was devastating, and so was the impact on Europe.

In 1153, Bernard journeyed to reconcile the warring provinces Metz (around 49:00 N 6:10 E) and Lorraine (around 49:00 N 5:30 E). He persuaded them to peace and to an agreement drawn up under his mediation, and then, in failing health, returned home to die.

If Bernard in controversy was fierce and not always fair, it partly because he was a man of intense feeling and dedication, quick to respond to any real or supposed threat to what he held sacred. It is his devotional writings, not his polemical ones, that are still read today. Among the hymns attributed to him are the Latin originals of "O Sacred Head, sore wounded," "Jesus, the very thought of Thee," "O Jesus, joy of loving hearts," "Wide open are Thy hands (to pay with more than gold the awful debt of guilt and sin, forever and of old--see the Lutheran Book of Worship et alibi)," and "O Jesus, King most wonderful." His sermons on the Song of Songs, treated as an allegory of the love of Christ, are his best-known long work.