Friar and Martyr at Auschwitz,

Most loving Father, whose Son Jesus Christ came to give his Life as a ransom for many: Grant to us the grace, as thou didst grant to thy servant Maximilian Kolbe, to be always ready to come to the aid of those in need or distress, not counting the cost; that so we may follow in the footsteps of the same thy Son Jesus Christ our Lord; who liveth and reigneth with thee and the Holy Ghost, one God, now and for ever. 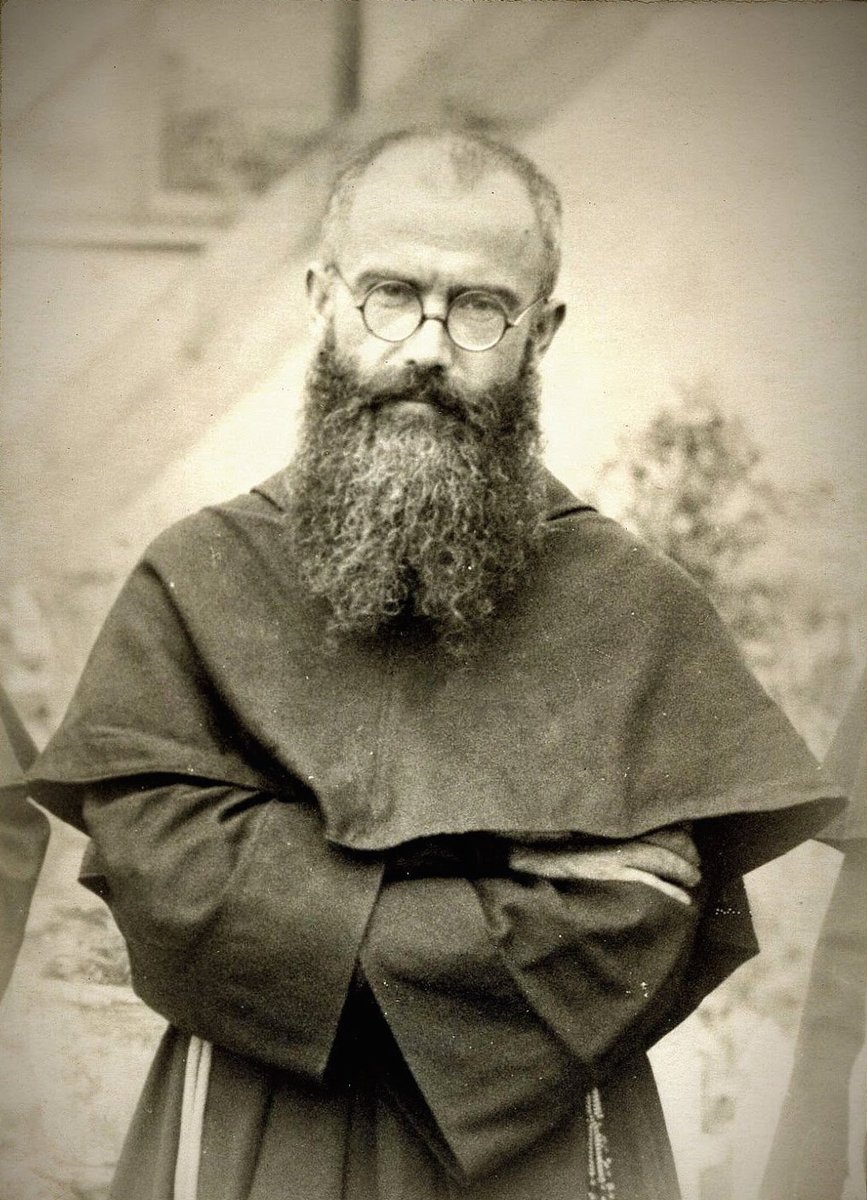 Maximilian Kolbe "was a Polish Catholic priest and Conventual Franciscan friar who volunteered to die in place of a stranger in the German death camp of Auschwitz, located in German-occupied Poland during World War II." [1]

"Raymond Kolbe (who took the name Maximilian when he became a friar) is known chiefly for the manner of his death, but his life was also noteworthy. He was born in 1894 near Lodz (51:49 N 19:28 E) in a part of Poland then under Russian rule, of parents who worked at home as weavers. In 1910 he became a Franciscan, taking the name Maximilian. His parents then undertook the monastic life, his mother as a Benedictine and his father as a Franciscan. His father left the order (I assume before taking life vows) to run a religious bookstore, and then enlisted with Pilsudski's army to fight the Russians. He was captured and hanged as a traitor in 1914." [2]

"Maximilian studied at Rome and was ordained in 1919. He returned to Poland and taught Church history in a seminary. He left the seminary (1) to found an association named for the Virgin Mary and dedicated to spreading the Roman Catholic faith and assisting those who held it to learn more about it; and (2) to establish a printing press and publish a periodical for the members of his association, consisting largely of Christian apologetics. He built a friary just west of Warsaw (52:15 N 21:00 E), which eventually housed 762 Franciscans and printed eleven periodicals (one with a circulation of over a million), including a daily newspaper. In 1930 he went to Asia, where he founded friaries in Nagasaki (34:25 N 129:52 E) and in India. In 1936 he was recalled to supervise the original friary near Warsaw. When Germany invaded Poland in 1939, he knew that the friary would be seized, and sent most of the friars home. He was imprisoned briefly and then released, and returned to the friary, where he and the other friars sheltered 3000 Poles and 1500 Jews, and continued to publish a newspaper encouraging its readers." [3]

"In May 1941 the friary was closed down and Maximilian and four companions were taken to Auschwitz, where they worked with the other prisoners, chiefly at carrying logs. Maximilian carried on his priestly work surreptitiously, hearing confessions in unlikely places and celebrating the Lord's Supper with bread and wine smuggled in for that purpose." [4]

"In order to discourage escapes, the camp had a rule that if a man escaped, ten men would be killed in retaliation. In July 1941 a man from Kolbe's bunker escaped. The remaining men of the bunker were led out and ten were selected, including a Sergeant Francis Gajowniczek. When he uttered a cry of dismay, Maximilian stepped forward and said, "I am a Catholic priest. Let me take his place. I am old. He has a wife and children." The officer had more use for a young worker than for an old one, and was happy to make the exchange. The ten men were placed in a large cell and left there to starve. Maximilian encouraged the others with prayers, psalms, and meditations on the Passion of Christ. After two weeks, only four were alive, and only Maximilian was fully conscious. The four were killed with injections of carbolic acid on 14 August 1941." [5]