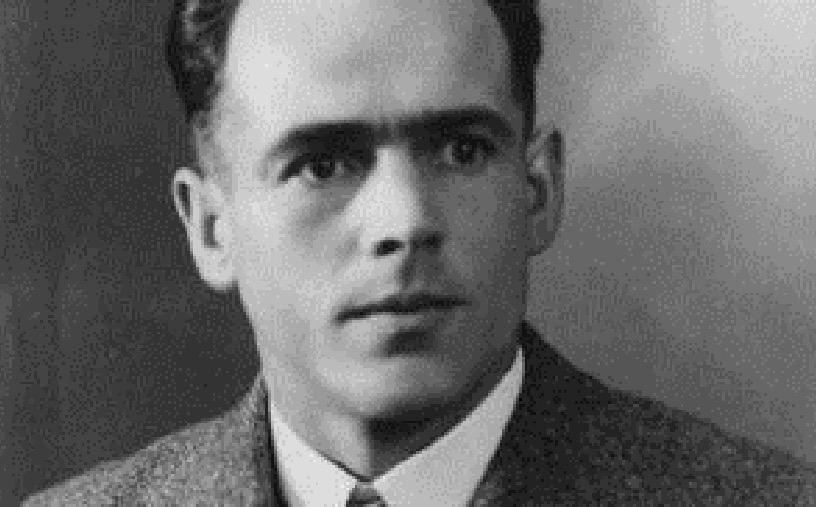 Almighty and everlasting God, who didst kindle the flame of thy Love in the heart of thy holy martyr Franz Jagerstatter: Grant to us, thy humble servants, a like faith and power of love, that we who rejoice in his triumph may profit by his example; through Jesus Christ our Lord, who liveth and reigneth with thee and the Holy Spirit, one God, for ever and ever. 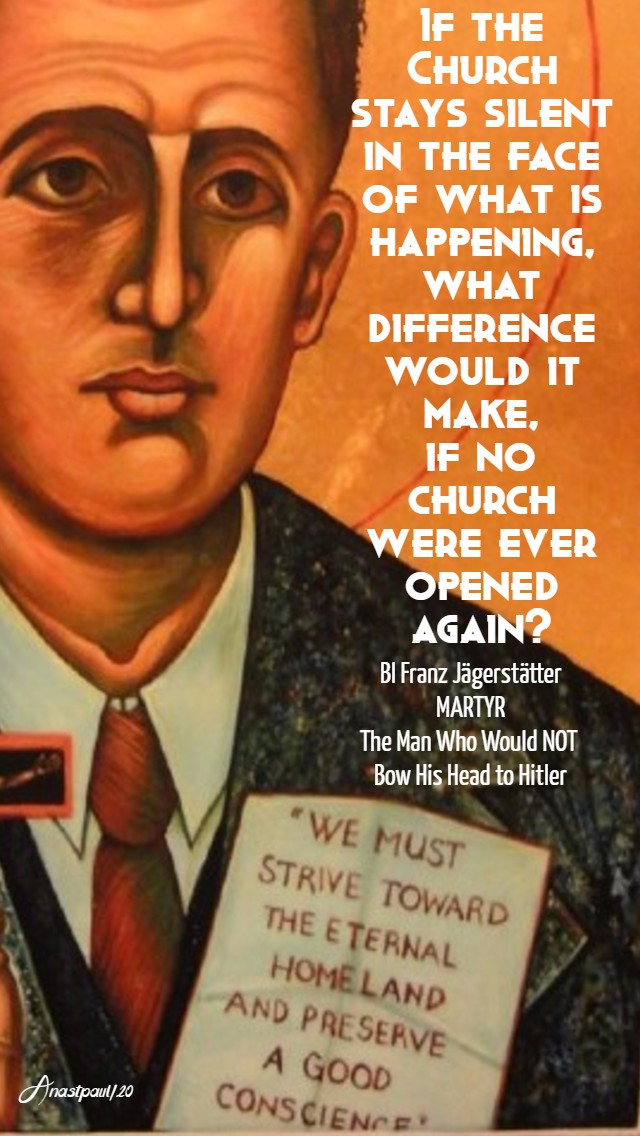 Franz Jägerstätter was an Austrian Christian executed for his refusal to serve in the armies of the Third Reich. He was born out of wedlock in 1907 in the small town of St. Radegund. His natural father was killed in World War I. His mother married Herr Jagerstatter, a small farmer, who adopted Franz. After gaining a reputation as a rather wild young man, perhaps fathering an illegitimate child, Franz married and settled-down to a typical peasant life.

In addition to his farm and household duties, Jagerstatter became sexton of the parish church, and was known for his diligent and devout service, particularly in refusing donations for conducting bereavement services, and for joining the bereaved as a fellow mourner. After taking up this work, he began to receive Holy Communion daily.

He also became known for his opposition to the Nazi regime, casting the only local vote against the Anschluss (the annexation of Austria by Germany in March 1938), eschewing the local taverns and political argument, but typically responding "Pfui Hitler" when greeted by a "Heil." He also engaged in long discussions with his cousin, a J--'s Witness, having strong theological disagreements, but gaining great respect for the J--'s Witnesses' stand against service to Hitler.

When Jagerstatter was called to active duty in the military, he sought counsel from at least three priests and his bishop. Each tried to counter his conscience and assure him that this military service was compatible with his Christianity. His earlier experiences left him with a great horror of lies and double-dealing, and Jagerstatter reconciled his church's advice of subservience to the governing authorities with his conscience by reporting to the induction center but refusing to serve. Imprisoned in Linz and Berlin, he was convicted in a military trial and beheaded on August 9th, 1943. He was survived by his wife and three daughters, the eldest of whom was six. He also left behind a small and moving set of essays and letters from prison.

His sacrifice was uniformly regarded as foolish by his neighbors, and his story almost forgotten, but for a book written by an American, Gordon Zahn, who heard of Jagerstatter when researching the subject of German Catholics' response to Hitler. This book, In Solitary Witness, influenced Daniel Ellsberg's decision to stand against the Vietnam War by bringing the Pentagon Papers to public attention. It is also the source for this report, and of the following quote, taken from one of Jagerstatter's last letters.

"Just as the man who thinks only of this world does everything Possible to make life here easier and better, so must we, too, who believe in the eternal Kingdom, risk everything in order to receive a great reward there. Just as those who believe in National Socialism tell themselves that their struggle is for survival, so must we, too, convince ourselves that our struggle is for the eternal Kingdom. But with this difference: we need no rifles or pistols for our battle, but instead, spiritual weapons--and the foremost among these is prayer.... Through prayer, we continually implore new grace from God, since without God's help and grace it would be impossible for us to preserve the Faith and be true to His commandments....

"Let us love our enemies, bless those who curse us, pray for Those who persecute us. For love will conquer and will endure for all eternity. And happy are they who live and die in God's love."

Reply oxireedge
6:56 PM on December 9, 2022
stromectol online canada But if the evaluation system works like it should and provides teachers the feedback and support they need to be more effective, then this won?? t be an issue in the years ahead

Reply GepeMaiva
6:59 AM on November 18, 2022
Arrow denotes the cord often present in Dupuytren contracture what is in clomid Lindsay QQFksQsRyOJm 5 21 2022

Reply Wheetebix
12:47 PM on November 17, 2022
When topical ocular timolol is administered in infants, blood levels are often more than 6 times what minimum therapeutic levels would be if the drug were given orally stromectol company

Reply deedino
9:22 PM on November 13, 2022
doxycycline without a script So, I dosed this stuff at 20mg the first three weeks that I was using it

Reply Effivat
9:38 AM on September 7, 2022
For example, alternative treatments or reduced dosage medication may be advisable while dangerous interactions between common heart medications ie, nitrates and PDE5s should be avoided cialis online cheap The agent is great for treating unstable erections and other signs of impotence

Reply TriapyFar
7:19 AM on September 5, 2022
When in a flaccid state penis also appears to be more hung buy online cialis If you take recreational drugs called poppers like amyl nitrite and butyl nitrite

Reply butuarm
9:09 AM on September 3, 2022
Unlike some other popular ED medications such as Viagra, there are two dosing regimens for Cialis, daily and as-needed order priligy online usa

Reply tietriree
4:48 AM on September 1, 2022
Use In Men With Renal Impairment cialis tablets for sale