King of Northumbria and Martyr, 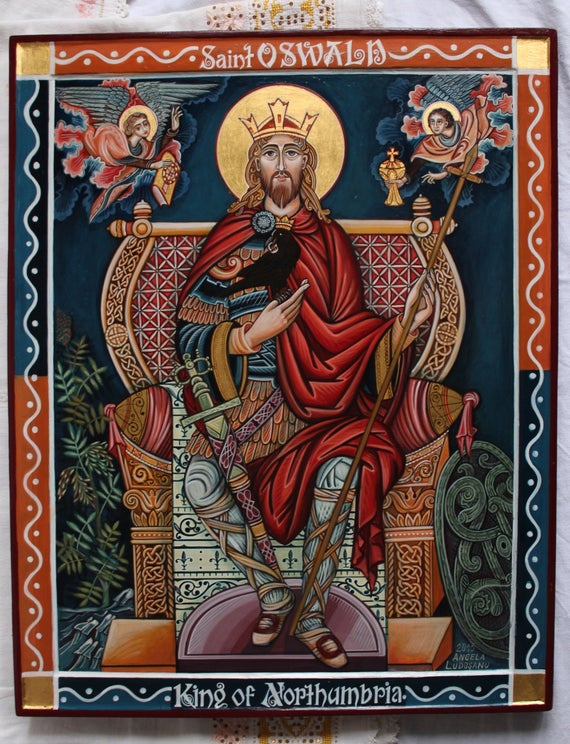 Lord God our King, who by the hand of thy servant Oswald didst Lift up the standard of the cross in the land of Northumbria, that thy Gospel might be preached in that land: Plant, we beseech thee, the standard of the cross in our hearts, and let thy grace shine forth in our lives, that thereby many may be drawn to the knowledge and love of thee; through Jesus Christ our Lord, who liveth and reigneth with thee and the Holy Ghost, one God, now and ever.

Lord God, whose servant Oswald the King sent for preachers to Bring the Good News of salvation to the people of his country, and stood beside the preacher Aidan and interpreted his words into the Anglo-Saxon language: Place in our hearts, we beseech thee, a concern for those who have not heard the message of thy love; and where we have not the ability to reach them ourselves, grant us the discernment and the charity to uphold those who do have it, that thy way may be known upon earth, thy saving health among all nations, through Jesus Christ our Lord, who liveth and reigneth with thee and the Holy Ghost, one God, now and ever.

Lord God almighty, who didst so kindle the faith of thy servant

in his kingdom and turned his people to thy light: grant that

we, being fired with the same Spirit, may ever be found

faithful servants of the gospel; through Jesus Christ our Lord,

who liveth and reigneth with thee and the Holy Spirit, one God,

now and for ever. Amen. 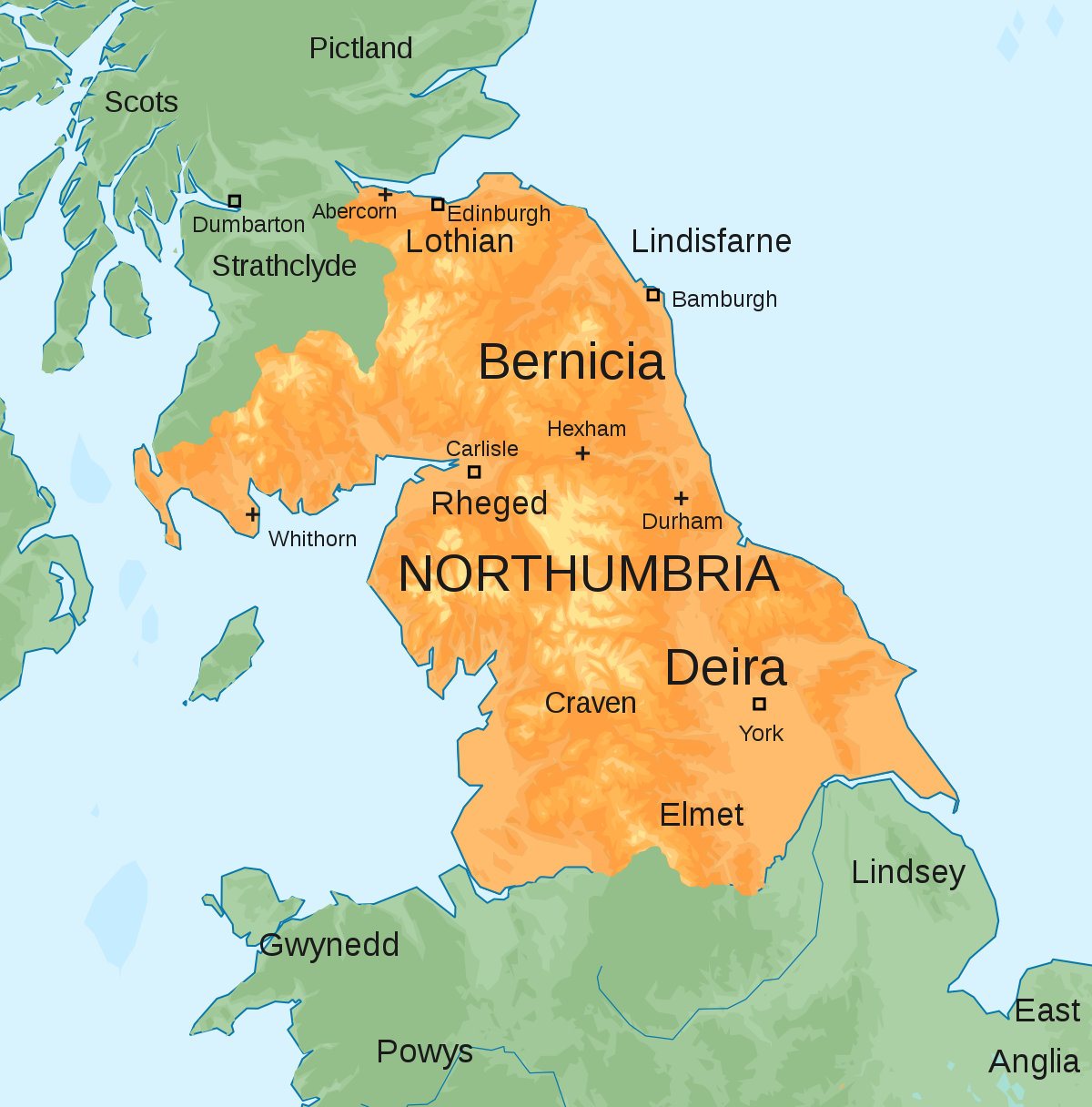 About Saint Oswald of Northumbria

Beginning in the year 449, the pagan Germanic peoples known as the Angles, the Saxons, and the Jutes invaded Britain and drove the native Britons, a Christian Celtic people, north and west into Wales, Scotland, Ireland, and Cornwall. They established seven principal kingdoms (the Heptarchy) in England: The Saxon kingdoms of Essex, Wessex and Sussex (East Saxons, West Saxons, and South Saxons), the Angle kingdoms of East Anglia, Mercia, and Northumbria, and the Jute kingdom of Kent (in southeast England, the London area). To this day, there are seven principal dialects of English spoken in England, and the seven areas in which they are spoken are substantially the same as the areas of the seven ancient Anglo-Saxon kingdoms.

In 597, Augustine, a missionary from Rome, established a mission in Kent, where he was favorably received, and became the first Archbishop of Canterbury. (He is remembered on 26 May.) However, his influence was initially confined to the southeast of England.

In Northumbria (the region north of the Humber River), in the north of England, in 616, Edwin seized the throne (replacing his sister's husband, Æthelfrith the Ravager), and Oswald, son of Aethelfrith, fled into Scotland, to the monastic settlement on the island of Iona (off the west coast of southern Scotland). Here Oswald encountered the Christian faith and was converted and baptised. Edwin married Ethelburgha, a princess of Kent, who brought with her the missionary Paulinus, who became first Archbishop of York. Edwin and many of his court accepted baptism in 627. In 632, King Cadwallon of Wales and the pagan king Penda of Mercia invaded Northumbria and killed Edwin in battle. The queen and the archbishop fled south, and Christianity was temporarily suppressed in the North.

The following year, Oswald returned from exile to claim the throne. He met Cadwallon (or Cadwalla) in battle near Hexham. The night before the battle, vastly outnumbered, with a small army of whom not more than a dozen were Christians, he set up a wooden cross, and asked his soldiers to join him in prayer. They did so, and promised to be baptised if they won the battle. The battle was accordingly joined, and Oswald won a victory "as complete as it was unlikely," defeating and slaying Cadwallon (the victor, as the Welsh bards tell us, of forty battles and sixty single combats). The battle site was thereafter known as Heavensfield. Northumbria, now united, became the most powerful of the Seven Kingdoms, and Oswald was recognized as paramount king of the Heptarchy.

His concern was for the conversion of his people to Christianity, and he sent messengers to Iona, where he had himself received the Gospel, asking for a Christian preacher. The first man sent was tactless and a failure, but his replacement, Aidan, was an outstanding success. (We remember Aidan on 31 August.) Since he did not at first speak the Anglo-Saxon language, Oswald, who was fully bilingual, stood beside him as he preached and interpreted the sermon. Aidan was soon joined by other missionaries, and the Church flourished in Northumbria. Oswald went to Wessex (the second most powerful of the Seven Kingdoms, and later to be the most powerful, and the nucleus of a united England) in order to seek a bride. Wessex was at that time largely pagan, but his bride, Kineburga, agreed to become a Christian, and so did her father, the King of Wessex. Thus a door was opened for the Gospel in southwestern England.

However, Penda, the pagan king of Mercia, yet lived, and in 640 war between Mercia and Northumbria was renewed, with the former followers of Cadwallon allied once more with Mercia. In 642 Penda killed Oswald in a great battle near Maserfeld (Salop), on the border between their kingdoms. As he fell dying, Oswald prayed aloud for the souls of his bodyguards, who died with him, and for the salvation of the people of Northumbria, and for his pagan enemies. Penda ordered the corpse of Oswald to be dismembered and its parts set up on stakes as a sacrifice to Odin. The head was reclaimed by Christians and sent to Lindisfarne, and is now thought to rest in a tomb in Durham Cathedral (but it should be noted that because of invasions and tumults it has been moved several times, making its present location uncertain).