Companions of the Apostle Paul 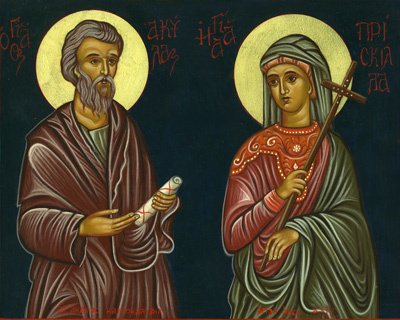 When Paul came to Corinth (probably in the year 50), he met Priscilla (or Prisca) and her husband Aquila, tentmakers by trade like Paul, Jewish, and just arrived from Rome, from which city the Emperor Claudius had recently expelled the Jewish community. (The Roman historian Suetonius tells us that Claudius expelled the Jews from Rome because they were rioting on account of someone named Chrestus -- presumably referring to disputes between Christian and non-Christian Jews.) It is not clear whether Aquila and Priscilla were already Christians before meeting Paul, or were converted by his preaching. After eighteen months, the three of them went together to Ephesus, where Priscilla and Aquila remained while Paul continued to Antioch. Soon after, a man named Apollos came to Ephesus, who had heard and believed a portion of the Christian message, and was promoting that belief with eloquent preaching, based on a thorough knowledge of the Hebrew Scriptures. Aquila and Priscilla befriended him and explained the Gospel to him more fully, after which he continued to preach with even greater effectiveness.

Priscilla and Aquila were apparently in Rome when Paul wrote to that congregation, and in Ephesus with Timothy when Paul wrote his last letter to Timothy. When Paul wrote to the Corinthians from Ephesus, he joined their greetings with his own. Clearly they were dear to Paul, and were earnest and effective in spreading the Good News of Christ and His saving work. Altogether, Aquila and Priscilla are mentioned six times in the New Testament (Acts 18:2,18,26; Romans 16:3; 1 Corinthians 16:19; 2 Timothy 4:19), and the reader will note that in the odd-numbered mentions, Aquila's name comes first, while in the even-numbered mentions, Priscilla's comes first, as if to emphasize that they are being mentioned on equal terms.

In 1 Timothy 2:12, Paul writes: "I do not permit a woman to instruct or command a man." Jerome, writing over 3 centuries later, mentions a woman he knew, the Lady Paula, who was well equipped to discuss theology and the Scriptures, but who, in discussions with men, instead of simply saying what she thought, would innocently remark, "You know, that reminds me of something I once heard a man say -- his opinion was that...." Thus, she avoided the appearance of being a woman teaching a man, and yet got her point across. Now the Greek Gyne can mean either "woman" or "wife", and the Greek Aner (Andro-) can mean either "man" or "husband". Thus Paul may have meant, "I do not permit a wife to teach or command her husband." In interpreting his meaning, it is perhaps worth noting that we are told that Priscilla and Aquila, acting jointly, instructed Apollos in the Gospel, and there is no hint in the text that Aquila did all the talking while Priscilla hovered in the background and kept them supplied with sandwiches and coffee.

(Note: "Priscilla" is the diminutive form of "Prisca", as "Johnny" is the diminutive form of "John". Literally, it means "little Prisca." Diminutives are more common in many foreign languages (Latin, Spanish, Russian, Greek) than in English. They can denote affection, or distinguish from an older person, especially a relative, with the same name.)

God of grace and might, we praise thee for thy servants Priscilla and Aquila, whom thou didst plenteously endow with gifts of zeal and eloquence to make known the truth of the Gospel. Raise up, we pray thee, in every country, heralds and evangelists of thy kingdom, that the world may know the immeasurable riches of our Savior, Jesus Christ our Lord, who liveth and reigneth with thee and the Holy Spirit, one God, now and for ever.