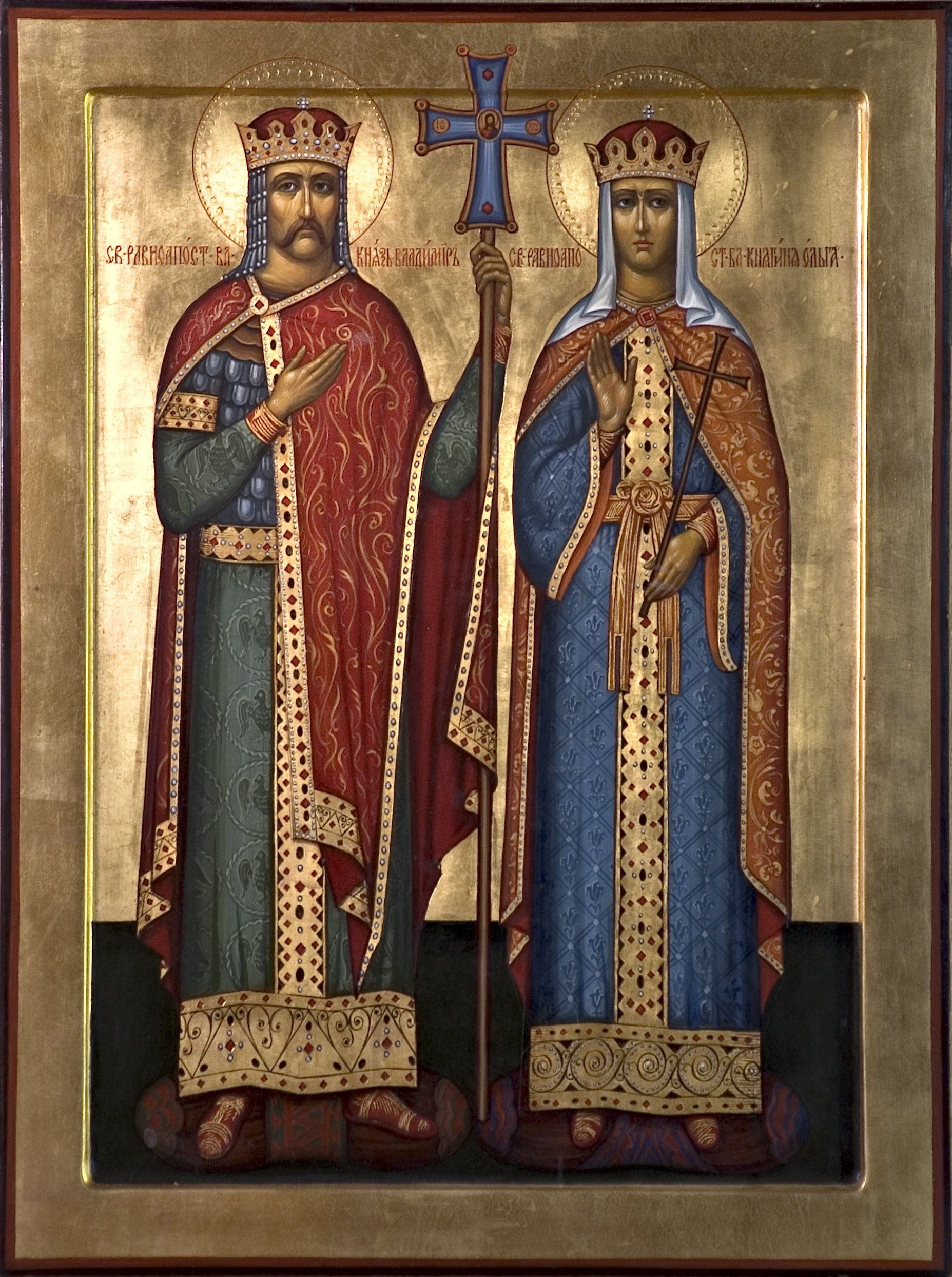 Olga (or Helga), born in about 890, was the wife of Prince Igor of Russia, and after his death in 945 she was regent for their son. She appears to have ruled well by secular standards. In 957 she visited Constantinople and, either then or earlier, became a Christian. She did not succeed in converting her son, or a significant number of their countrymen. She died in 969, probably on 11 July.

Vladimir, great-grandson of Rurik (the traditional founder of the Russian state), grandson of Olga, and youngest of the three sons of Sviatoslav of Kiev, was born in 956 and was made Prince of Novgorod in 970. In 972 his father died, and the three sons fought for the crown. Yaropolk killed Oled, and Vladimir fled to his Viking kinsmen in Scandinavia. In 980 he returned with Viking support, killed Yaropolk, and took the throne. He expanded his empire by a series of conquests. In 988, he proposed a military alliance with the Byzantine emperor Basil II, and a marriage to the emperor's sister Anna. In return, he agreed to convert to Christianity. The agreement was made, Vladimir was baptized, and when the emperor reneged on the marriage, Vladimir invaded the Crimea. The marriage duly took place and the alliance prospered.

Vladimir took his Christian commitment seriously, and under his rule the Christianization of Russia proceeded rapidly. He put away his former collection of pagan wives and mistresses, destroyed idols and pagan temples, built churches and monasteries and schools, brought in Greek missionaries to educate his people, abolished or greatly restricted capital punishment, and gave lavish alms to the poor. In converting his people, however, he was willing to resort to military methods (all his life he had survived by fighting), and some of his former pagan wives and their sons raised an armed rebellion against him, in the course of which he was killed near Kiev, 15 July 1015. He and his grandmother Olga are honored as the founders of Russian Christianity.

O God, who didst call thy servants Olga and her grandson Vladimir to an earthly throne that they might advance thy heavenly kingdom, and didst give them zeal for thy Church and love for thy people: Mercifully grant that we who commomorate them this day may be fruitful in good works, and attain to the glorious crown of thy saints; through Jesus Christ our Lord, who liveth and reigneth with thee and the Holy Spirit, one God, for ever and ever.