Abbot and Founder of the  Benedictine Order 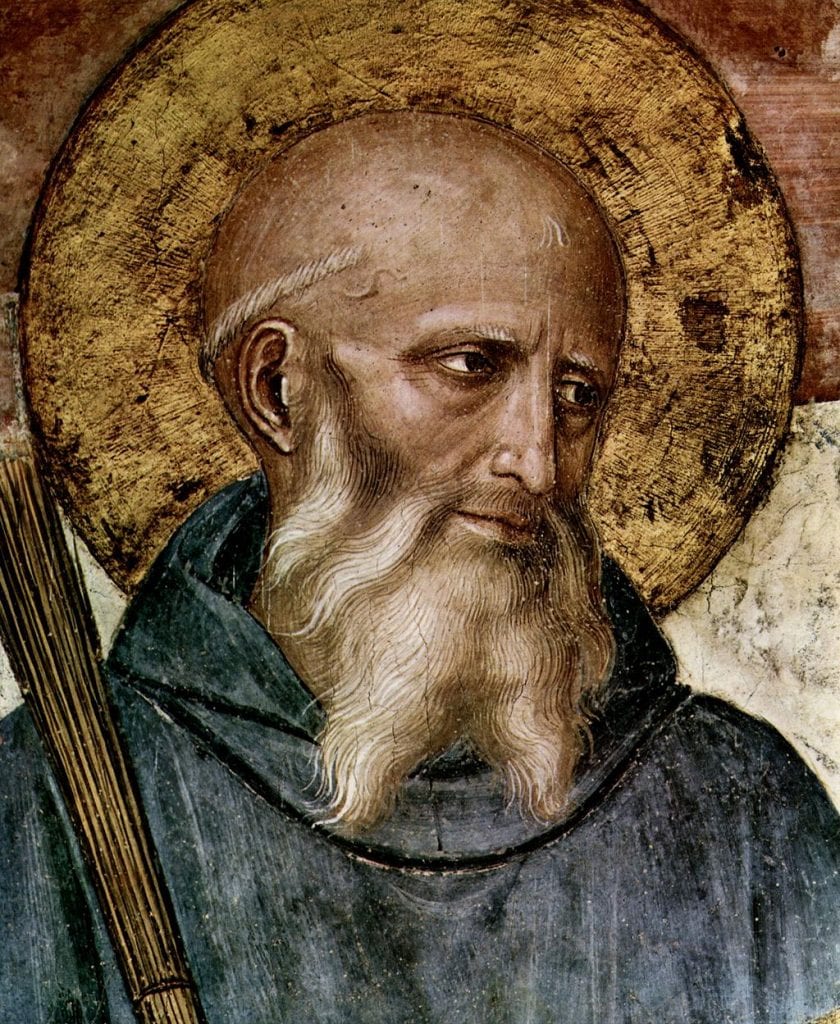 Benedict was born at Nursia (Norcia) in Umbria, Italy, around 480 Ad. He was sent to Rome for his studies, but was repelled by the dissolute life of most of the populace, and withdrew to a solitary life at Subiaco. A group of monks asked him to be their abbot, but some of them found his rule too strict, and he returned alone to Subiaco. Again, other monks called him to be their abbot, and he agreed, founding twelve communities over an interval of some years. His chief founding was Monte Cassino, an abbey which stands to this day as the mother house of the world-wide Benedictine order.

Totila the Goth visited Benedict, and was so awed by his presence that he fell on his face before him. Benedict raised him from the ground and rebuked him for his cruelty, telling him that it was time that his iniquities should cease. Totila asked Benedict to remember him in his prayers and departed, to exhibit from that time an astonishing clemency and chivalry in his treatment of conquered peoples.

Benedict drew up a rule of life for monastics, a rule which he calls "a school of the Lord's service, in which we hope to order nothing harsh or rigorous." The Rule gives instructions for how the monastic community is to be organized, and how the monks are to spend their time. An average day includes about four hours to be spent in liturgical prayer (called the Divinum Officium -- the Divine Office), five hours in spiritual reading and study, six hours of labor, one hour for eating, and about eight hours for sleep. The Book of Psalms is to be recited in its entirety every week as a part of the Office.

A Benedictine monk takes vows of "obedience, stability, and conversion of life." That is, he vows to live in accordance with the Benedictine Rule, not to leave his community without grave cause, and to seek to follow the teaching and example of Christ in all things. Normal procedure today for a prospective monk is to spend a week or more at the monastery as a visitor. He then applies as a postulant, and agrees not to leave for six months without the consent of the Abbot. (During that time, he may suspect that he has made a mistake, and the abbot may say, "Yes, I think you have. Go in peace." Alternately, he may say, "It is normal to have jitters at this stage. I urge you to stick it out a while longer and see whether they go away." Many postulants leave before the six months are up.) After six months, he may leave or become a novice, with vows for one year. After the year, he may leave or take vows for three more years. After three years, he may leave, take life vows, or take vows for a second three years. After that, a third three years. After that, he must leave or take life vows (fish or cut bait). Thus, he takes life vows after four and a half to ten and a half years in the monastery. At any point in the proceedings at which he has the option of leaving, the community has the option of dismissing him.

The effect of the monastic movement, both of the Benedictine order and of similar orders that grew out of it, has been enormous. We owe the preservation of the Holy Scriptures and other ancient writings in large measure to the patience and diligence of monastic scribes. In purely secular terms, their contribution was considerable. In Benedict's time, the chief source of power was muscle, whether human or animal. Ancient scholars apparently did not worry about labor-saving devices. The labor could always be done by oxen or slaves. But monks were both scholars and workers. A monk, after spending a few hours doing some laborious task by hand, was likely to think, "There must be a better way of doing this." The result was the systematic development of windmills and water wheels for grinding grain, sawing wood, pumping water, and so on. The rotation of crops (including legumes) and other agricultural advances were also originated or promoted by monastic farms. The monks, by their example, taught the dignity of labor and the importance of order and planning. For details, see The Mediaeval Machine: The Industrial Revolution of the Middle Ages, by Jean Gimpel, (Holt Rinehart & Winston, 1976; Penguin, 1977, ISBN 0-14-00-4514-7).

Almighty and everlasting God, whose precepts are the wisdom of A loving Father: Give us grace, following the teaching and example of thy servant Benedict, to walk with loving and willing hearts in the school of the Lord's service; let thine ears be open unto our prayers; and prosper with thy blessing the work of our hands; through Jesus Christ our Lord, who liveth and reigneth with thee and the Holy Spirit, one God, for ever and ever.