Bishop of Caesarea and Teacher of the Faith, 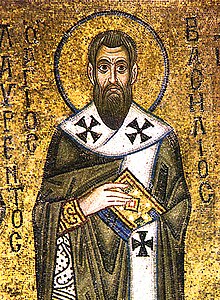 Icon of St. Basil the Great from the

Saint Basil was "born in Caesarea of Cappadocia, a province in what is now central Turkey)" in 329 a.d. (Society of Archbishop Justus). After committing to the Monastic life, Basil established a monastic settlement near his home. "In 367-8, when Cappadocia suffered a severe and widespread famine, Basil sold his family's very extensive land holdings in order to buy food for the starving, persuading many others to follow his example, and putting on an apron to work in the soup kitchen himself. In this crisis, he absolutely refused to allow any distinction to be made between Jew and Christian, saying that the digestive systems of the two are indistinguishable. He also built a hospital for the care of the sick, housing for the poor, and a hospice for travelers," (Society of Archbishop Justus).

In order to assist the new Bishop of Caesarea, Basil was ordained to the priesthood in 362 a.d. (He later became bishop in 370 a.d.)

A man a principle, Basil "denounced and excommunicated those who owned houses of prostitution, he worked to secure justice for the poor against those who oppressed them, and he severely disciplined clergy who used their office to accumulate money or to live too well at the expense of the faithful," (Society of Archbishop Justus).

Basil served as a priest during a crucial time in the church, between the First Ecumenical Council of Nicea in 325, and the Second Nicene-Constantinople Council, in 381; a time in which the area was under Arian emperor, Valens. The Arian heresy had been condemned at the First Council of Nicea, from which we have the Nicene Creed. Yet, the Arians adamantly opposed the declaration that Christ was fully God, equal with the Father. "Basil made it his policy to try to unite the so-called semi-Arians with the Nicene party against the outright Arians, making use of the formula 'three persons (hypostases) in one substance (ousia),' thus explicitly acknowledging a distinction between the Father and the Son (a distinction that the Nicene party had been accused of blurring), and at the same time insisting on their essential unity," (Society of Archbishop Justus).

In 371 a.d., when Emperor Valens traveled through Caesarea, "he demanded the theological submission of Basil, who flatly refused. The imperial prefect expressed astonishment at Basil's defiance, to which Basil replied, "Perhaps you have never met a real bishop before." Valens retaliated by dividing the province of Cappadocia into two provinces, with the result that the Arian Bishop of Tyana became metropolitan of the new province of Western Cappadocia," (Society of Archbishop Justus).

Saint Basil was a prolific writer. "His most famous writings include the Hexaemeron ("The Six Days"), a series of nine sermons on the days of creation, in which he speaks of the beauties of the created world as revelations of the splendor of God. His Against Eunomius defends the deity of Christ against an Arian writer, and his On the Holy Spirit speaks of the deity of the Third Person of the Trinity, and the rightness of worshipping Him together with the Father and the Son," (Society of Archbishop Justus).

After the death of the Arian emperor, Valens, the Arian threat to the Nicene faith faded away. Shortly thereafter, in 379 a.d., Basil died. "He was mourned by the entire city, and the weeping crowds at his funeral included Christians, Jews, and pagans," (Society of Archbishop Justus).

Almighty God, who hast revealed to thy Church thine eternal Being of glorious majesty and perfect love as one God in Trinity of Persons: Give us grace that, like thy bishop Basil of Caesarea, we may continue steadfast in the confession of this faith, and constant in our worship of thee, Father, Son, and Holy Spirit; who livest and reignest for ever and ever.