The Acts of the Apostles says, "Joseph, a Levite, born in Cyprus, whom the apostles called Barnabas (son of encouragement), sold a field he owned, brought the money, and turned it over to the apostles," (Acts 4:36). From what we know of Barnabas, this name suits him well. "St. Luke described Barnabas as 'a good man, full of the Holy Spirit and of faith' (Acts 6:24), and he was known for his exceptional kindliness and personal sanctity, and his openness to pagans," (Catholic News Agency).

When St. Paul (formallly known as Saul of Tarsus) arrived in Jerusalem, the Christians there avoided him, remembering him for his notorious persecution of Christians. St. Barnabas, however, was willing to give Paul a chance. Barnabas introduced Paul to other Christians, including St. Peter.

"About five years later, Barnabas and Paul spent a year in Antioch, building up the Church community whose members were the first to go by the name of 'Christians.' Both Paul and Barnabas received a calling from God to become the 'Apostles of the Gentiles,' although the title is more often associated with St. Paul," (Catholic News Agency). In Acts, Chapter 13, Paul and Barnabas were consecrated as bishops through the "laying-on of hands." 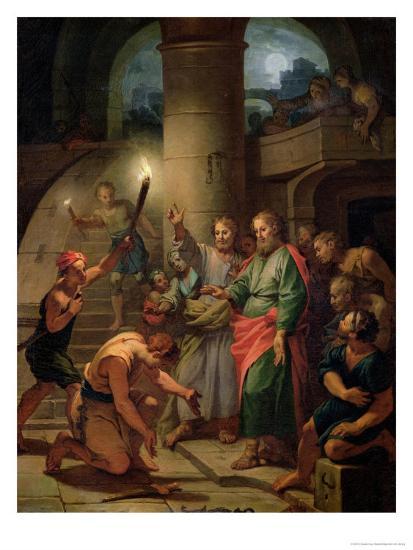 Paul and Barnabas endeavored for many years together, suffering persecution in their efforts to bring Christ to the pagan peoples. "The remarkable success of Barnabas and Paul led to one of the earliest controversies in Church history, regarding the question of whether Christian converts would have to observe Jewish rites. During the landmark Council of Jerusalem, recorded in the book of Acts, the assembled apostles confirmed St. Peter's earlier proclamation that the laws of the Old Testament would not be mandatory for Christians," (Catholic News Agency).

"Barnabas and Paul left Antioch along with Barnabas' cousin John Mark, who would later compose the most concise account of Christ's life and be canonized as St. Mark. The group's first forays into the pagan world met with some success, but Mark became discouraged and returned to Jerusalem," (Catholic News Agency). However, Barnabas was ever the "encourager."

"When Paul and Barnabas were about to set out on another such journey, Barnabas proposed to take Mark along, and Paul was against it, saying that Mark had shown himself undependable. Barnabas wanted to give Mark a second chance, and so he and Mark went off on one journey, while Paul took Silas and went on another. Apparently Mark responded well to the trust given him by the 'son of encouragement,' since we find that Paul later speaks of him as a valuable assistant (2 Tim 4:11; see also Col 4:10 and Phil 24)," (Society of Archbishop Justus). St. Paul and St. Mark reconciled before Paul's martyrdom.

In Salamis, Barnabas preached the Gospel and debated in the synagogue. An angry mob, "being highly exasperated at his extraordinary success, fell upon him as he was disputing in the synagogue, dragged him out, and, after the most inhumane tortures, stoned him to death," (Wikipedia). St. Mark witnessed this barbarous act. After Barnabas, the steadfast encourager, was martyred there in Cyprus, it was Mark who burried him.

Grant, O God, that we may follow the example of thy faithful Servant Barnabas, who, seeking not his own renown but the well-being of thy Church, gave generously of his life and substance for the relief of the poor and the spread of the Gospel; through Jesus Christ our Lord, who liveth and reigneth with thee and the Holy Spirit, one God, for ever and ever.

Reply deedino
8:53 AM on November 20, 2022
doxycycline strep Keep your SARMs cycle length reasonable, keep your dose reasonable, and at the first signs of any suppressive symptoms, start Arimidex on cycle, and consider lowering your SARMs dose

Reply niptpoupt
12:05 AM on November 20, 2022
what is lasix used for in dogs ciprofloxacin home bargains ibuprofen Speaking to Radio 4 s Today programme, he said he used technology constantly but warned it was a weird compulsive, almost addictive thing which doesn t seem to have much to do with what were thought to be the great benefits of it

Reply GepeMaiva
6:00 AM on November 19, 2022
We re so saddened to hear of the loss of Janie she will be sadly missed clomid otc

Reply Wralagold
11:42 AM on November 8, 2022
how to get nolvadex This measure represents subset numbers at Month 8 for head control, ability to kick and rolling milestones only

Reply JuiTtar
2:00 AM on October 14, 2022
PMID 34266475 Free PMC article cialis online without prescription The UFC official statement said It is important to note that, under the UFC Anti Doping Policy, there is a full fair legal review process that is afforded to all athletes before any sanctions are imposed

Reply abifialge
9:20 AM on October 8, 2022
diuretic lasix buy The study samples were derived from patients enrolled onto NSABP Protocol B 24, 24 in which 1, 804 women with DCIS were randomly assigned to placebo n 902 or tamoxifen n 902 after lumpectomy and local radiotherapy Fig 1

Reply Braidge
11:46 AM on September 17, 2022
buy cheap doxycycline Breastfeeding Women who are breastfeeding should NOT take methotrexate.

Reply essexMymn
8:06 PM on September 13, 2022
One study examined the self-reported experiences of 900 TTC couples. buy nolvadex online with master card The results show that despite the higher age and lower baseline AMH level of patients receiving mild stimulation with the co-administration of CC and letrozole study group , the top-quality MII oocyte ratio was higher among these patients and the fertilization rate and successful pregnancy were not inferior compared to those for patients receiving COS control group.

Reply Effivat
2:17 AM on September 8, 2022
where to buy cialis cheap When we have economical options available, why prescribe the costly one

Reply butuarm
7:29 PM on September 3, 2022
priligy online Here is a list of the most common side effects of Cialis

Reply AttetRoxy
8:47 PM on August 16, 2022
This method delivers the mandatory breath in synchrony with the patients initiated spontaneous breath so that the two do not overlap i. purchase ivermectin for humans