Missionary to the Scots, 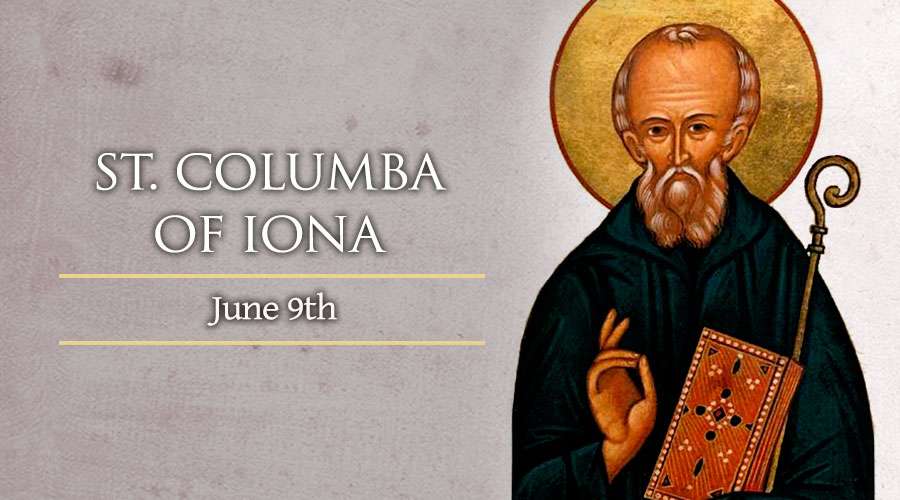 Perhaps the greatest of all the Celtic saints is Saint Columba, whose name means "dove." Adamnán of Iona wrote that “He (Columba) had an angelic face, was of an excellent nature, perfect and polished in speech, holy in deed, great in counsel, loving to all.”

During the dark ages, Northern Europe was troubled by violence. It was during this time that "monasteries served as inns, orphanages, centers of learning, and even as fortresses. The light of civilization flickered dimly and might have gone out altogether if it had not been for these convent-shelters," (Society of Archbishop Justus). Saint Columba established three such places.

In 563, Columba sailed to Scotland, with twelve disciples, to preach the Holy Gospel. "On the eve of Pentecost the saint of God landed on the first piece of land where his native Ireland was no more in sight: it was the small isle of Iona in the Inner Hebrides (approximately three miles long and one mile wide)," (orthochristian). Here, Saint Columba built a church and a monastery, making Iona his "home base." 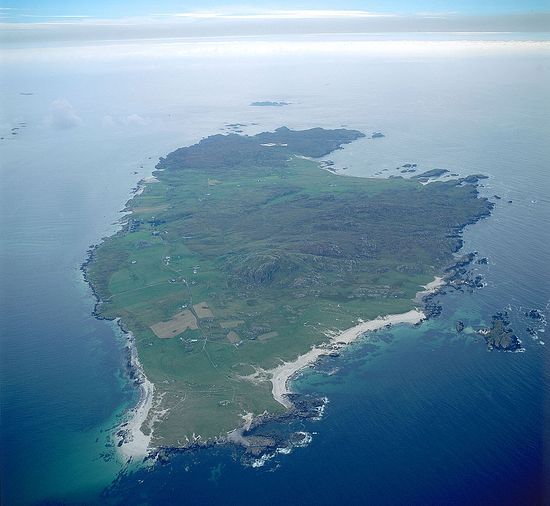 A view of Iona (source - Pinterest.com)

Christianity "in the Celtic tradition was to be spread from this great center throughout Scotland, and afterwards to many parts of England and the continent through the labors of St. Columba and his numerous disciples and followers over several generations. This was the catalyst for the conversion of the Picts, Scots and northern British," (orthochristian).

According to biographers, Columba's kindness and generosity extended to every stranger.  Columba took pity on a robber who had sought to kill the monastery's seals (which were used as a food source), and began supplyiing the robber with meals. With compassion, he "shared the joys and sorrows of all his neighbors," (orthochristian).

Interestingly, the "Loch Ness Monster" was first mentioned in Adamnán of Iona's "The Life of Columba."

“When the blessed man was living for some days in the province of the Picts, he was obliged to cross the river Nesa; and when he reached the bank, he saw some inhabitants burying an unfortunate man, who had been a short time before seized, as he was swimming, and bitten the most severely by a monster that lived in the water. The blessed man, on hearing this, directed one of his companions to swim over and row across the coble that was moored at the farther bank. The latter obeyed without the least delay, taking off his clothes, except his tunic. But the monster, lying on the bottom of the stream, was only roused for more prey. As the man was swimming, it gave an awful roar and darted after him, with its mouth wide open. The blessed man raised his hand and formed the saving sign of the cross and commanded the ferocious monster: ‘Thou shalt go no further, nor touch the man; go back with all speed!’ The monster was terrified and fled, as if it had been pulled back with ropes.”

Though Saint Columba's memory was desecrated during the Reformation, his legacy lives on today within the flourishing ecumenical community in Scotland and Iona.

O God, who by the preaching of thy blessed servant Columba Didst cause the light of the Gospel to shine in Scotland: Grant, we beseech thee, that, having his life and labors in remembrance, we may show forth our thankfulness to thee by following the example of his zeal and patience; through Jesus Christ our Lord, who liveth and reigneth with thee and the Holy Spirit, one God, for ever and ever.