The Nativity of John the Baptist

The Nativity of Saint John the Baptist 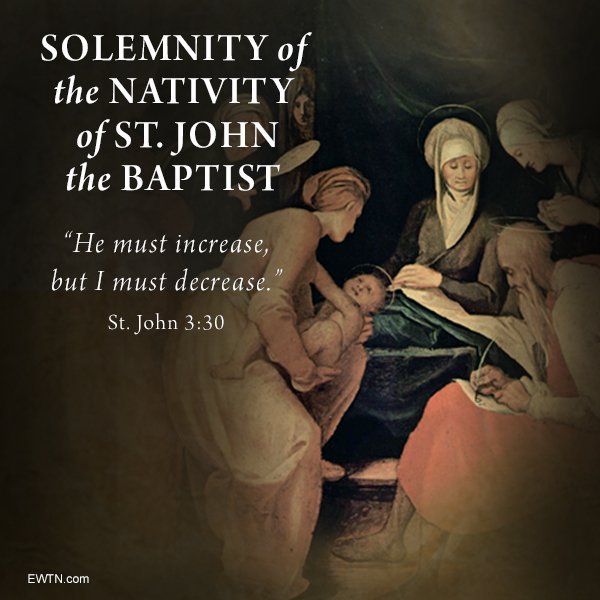 Zechariah (a priest) and his wife Elizabeth were an aged, devout, childless couple. One day, when Zechariah was serving in the temple, he was visited by the Angel Gabrielle who told Zechariah that his wife would give birth to a son. The son was to become a great prophet and pave the way before the Lord (Christ), "like Elijah."

After Mary became pregnant with Jesus, she visited Elizabeth:

"At that time Mary got ready and hurried to a town in the hill country of Judea, where she entered Zechariah’s home and greeted Elizabeth. When Elizabeth heard Mary’s greeting, the baby leaped in her womb, and Elizabeth was filled with the Holy Spirit." (Luke 1:39-41) 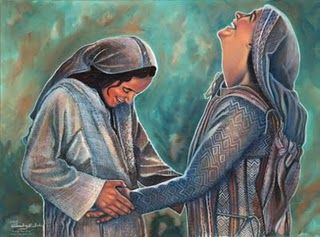 The Gospels tell us that John the Baptist "preached and baptized beside the Jordan river, in the wilderness of Judea. He called on his hearers to repent of their sins, be baptized, amend their lives, and prepare for the coming of the Kingship of God. He spoke of one greater than himself who was to come after. Jesus came to be baptized, and John told some of his disciples, 'This is the man I spoke of,'" (Society of Archbishop Justus). 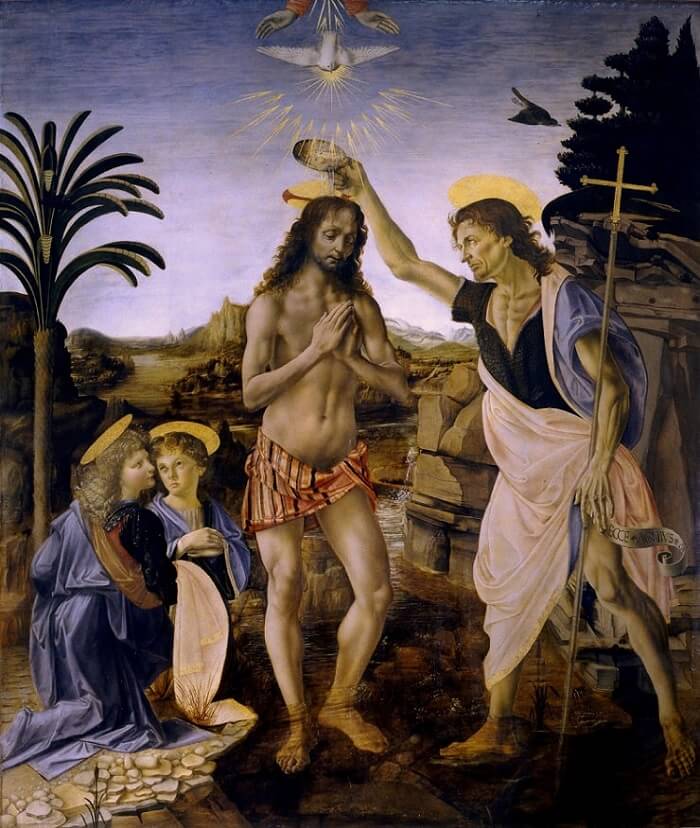 The Baptism of Christ - by Leonardo da Vinci

"After His baptism by John, Jesus began to preach, and attracted many followers. In fact, many who had been followers of John left him to follow Jesus. Some of John's followers resented this, but he told them: 'This is as it should be. My mission is to proclaim the Christ. The groomsman, the bridegroom's friend, who makes the wedding arrangements for the bridegroom, is not jealous of the bridegroom. No more am I of Jesus. He must increase, and I must decrease,' (John 3:22-30)," (Society of Archbishop Justus).

After King Herod Antipas divorced his own wife and took his still-living brother's wife (Herodias) as his own, John the Baptist rebuked him. Herod Antipas, under pressure from Herodias, had John arrested and beheaded.

While John was in prison awaiting his death, Jesus declared, "John is a prophet and more than a prophet. He is the one spoken of in Malachi 3:1, the messenger who comes to prepare the way of the Lord. No man born of woman is greater than John, but the least in the Kingdom of God is greater than John."

Almighty God, by whose providence thy servant John the Baptist Was wonderfully born, and sent to prepare the way of thy Son our Savior by preaching repentance: Make us so to follow his doctrine and holy life, that we may truly repent according to his preaching; and after his example constantly speak the truth, boldly rebuke vice, and patiently suffer for the truth's sake; through the same thy Son Jesus Christ our Lord, who liveth and reigneth with thee and the Holy Spirit, one God, for ever and ever.