Teacher of the Faith and Martyr at Rome, 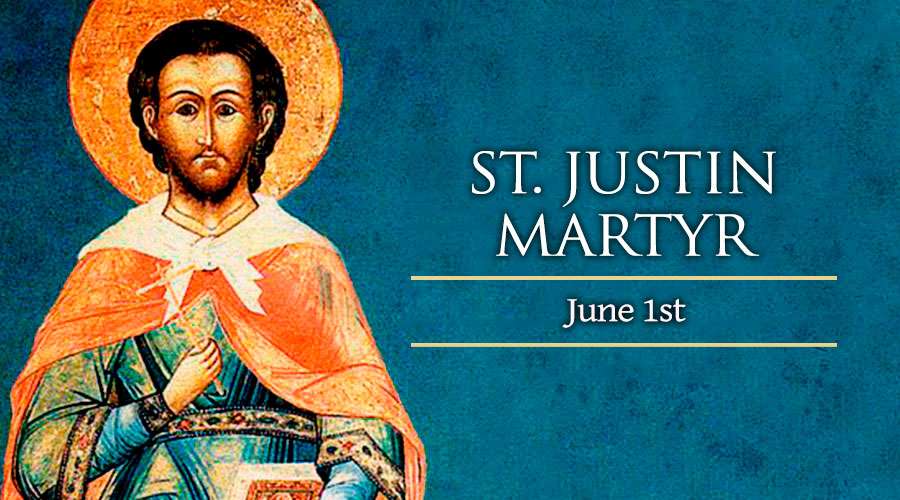 Justin was born to Pagan Greek parents around 100 A.D. in Samaria. While studying in Ephesus, Justin was impressed by the steadfastness of faith by the Christian martyrs. Walking along the shore, he met a man who told Justin of Jesus as the fulfillment of the Jewish prophecies. He later wrote, "Straightway a flame was kindled in my soul... and a love of the prophets and those who are friends of Christ possessed me." He later became a Christian. As a philospher, Justin saw Platonism as erroneous, but also as serving somewhat as "a schoolmaster to bring us to Christ," and he later opened a school for the study of Christian philosophy.

In Rome, Justin debated the Cynic philosopher Crescens. Soon afterwards, he was arrested for being a practitioner of an "unauthorized religion" and was tried before the Roman prefect Rusticus. Justin refused to denouce his faith and was sentenced to death. He was beheaded, along with six of his students (one of whom was a woman).

To  learn more about Saint Justin the Martyr, click this link: http://justus.anglican.org/resources/bio/175.html

On finishing the prayers we greet each other with a kiss. Then Bread and a cup of water mixed with wine are brought to the leader and he, taking them, sends up praise and glory to the Father of the Universe through the name of the Son and of the Holy Spirit, and offers thanksgiving at some length that we have been deemed worthy to receive these things. When the leader has finished the prayers and thanksgivings, the whole congregation assents, saying, "Amen." ("Amen" is Hebrew for "So be it.") Then those whom we call deacons give to each of those present a portion of the consecrated bread and wine and water, and they take it to the absent.

Almighty and everlasting God, who didst find thy martyr Justin Wandering from teacher to teacher, seeking the true God, and didst reveal to him the sublime wisdom of thine eternal Word: Grant that all who seek thee, or a deeper knowledge of thee, may find and be found by thee; through Jesus Christ our Lord, who liveth and reigneth with thee and the Holy Spirit, one God, for ever and ever.