Each week, the Very Rev. James Karanja emails parishioners an introduction to the upcoming sermon. You will find these posted here.

Please join us each Sunday at 12:15p.m. for the rest of that week's sermon!

Jesus Prays for You

JESUS PRAYS FOR YOU.

Do you know that Jesus prays for you? In John 17: 15 Jesus prays for His disciples saying: "My prayer is not that you take them out of the world but that you protect them from the evil one. They are not of the world, even as I am not of it. Sanctify them by the truth; your word is truth. As you sent me into the world, I have sent them into the world. For them I sanctify myself, that they too may be truly sanctified."

Jesus prays everyday for our protection from the evil .

Hebrews 7:25 says: "Therefore he is able to save completely those who come to God through him," because he always lives to intercede for them."

May God help us to pray for protection of other people as Jesus prays for us.

"I urge, then, first of all, that petitions, prayers, intercession and thanksgiving be made for all people— for kings and all those in authority, that we may live peaceful and quiet lives in all godliness and holiness. This is good, and pleases God our Savior, who wants all people to be saved and to come to a knowledge of the truth." (1Timothy 2:1-4).

May God bless you with your families and friends and protect you by the precious blood of Jesus.

GOD LOVES YOU AS YOU ARE GOD LOVES YOU AS YOU ARE.

God's love is unconditional. He loves you as you are.

How does God show his love for you?

"But God demonstrates his own love for us in this: While we were still sinners, Christ died for us."

God loved us while we were yet sinners.

He commands us to love other people no matter how sinful they are.

May God help us to love others as He loves us in Christ Jesus our Lord.

May God bless you with your family and friends and protect you by the precious blood of Jesus.

"WITHOUT ME YOU CAN DO NOTHING" "WITHOUT ME YOU CAN DO NOTHING."

Jesus declares that with him, his disciple could produce much fruit but without him they could do nothing.

May God help us to completely depend on Jesus. "For with God nothing shall be impossible." (Luke 1:37) The Peace of the Lord be always with you.

In Acts 4:32-35 we read: "All the believers were one in heart and mind. No one claimed that any of their possessions was their own, but they shared everything they had. With great power the apostles continued to testify to the resurrection of the Lord Jesus. And God’s grace was so powerfully at work in them all that there were no needy persons among them. For from time to time those who owned land or houses sold them, brought the money from the sales and put it at the apostles’ feet, and it was distributed to anyone who had need."

The unity of the believers helped them to care for one another and to bring glory to God.

Jesus prayed for the unity of his believers saying: “My prayer is not for them alone. I pray also for those who will believe in me through their message, that all of them may be one, Father, just as you are in me and I am in you. May they also be in us so that the world may believe that you have sent me." (John17:20-21).

May God help us and all believers in Christ to live and serve in unity for the glory God.

May God bless you with your family and friends and and protect you in the name of Jesus Christ our Lord.

ALLELUIA, CHRIST IS RISEN: THE LORD IS RISEN INDEED. ALLELUIA! The Lord is risen indeed . Alleluia

The angel of the LORD said to the women:

“You are looking for Jesus the Nazarene, who was crucified.

He has risen! He is not here. See the place where they laid him.

7 But go, tell his disciples and Peter, ‘He is going ahead of you into Galilee.

"He has risen." Alleluia!

By his resurrection, Jesus has conquered sin, death and Satan.

resurrection to continue doing what Jesus was doing in the name of :Jesus.

"Very truly I tell you, whoever believes in me will do the works

I have been doing, and they will do even greater things than these,

May God help us to have faith in Jesus and to do his works in his name.

In the name of Jesus , we have the victory.

the name of Jesus.

14 Jesus found a young donkey and sat on it, as it is written:

see, your king is coming,

" 9 Those who went ahead and those who followed shouted,

10 “Blessed is the coming kingdom of our father David!”

Jesus chose to ride on a donkey as a sign

of his great humility to fulfil the prophecy in

See, your king comes to you,

lowly and riding on a donkey,

The disciples of Jesus threw their clothes over the donkey

and Jesus sat on it. The people who followed

10 “Blessed is the coming kingdom of our father David!

“Hosanna in the highest heaven!”

The palm branches were a symbol of peace ( shalom)

and victory . Hosanna means : Save now.

to bring salvation and peace.

"Let this mind be in you, which was also in Christ Jesus: Who, being in the form of God, thought it not robbery to be equal with God: But made himself of no reputation, and took upon him the form of a servant, and was made in the likeness of men: And being found in fashion as a man, he humbled himself, and became obedient unto death, even the death of the cross. Wherefore God also hath highly exalted him, and given him a name which is above every name: That at the name of Jesus every knee should bow, of things in heaven, and things in earth, and things under the earth; And that every tongue should confess that Jesus Christ is Lord, to the glory of God the Father."

order to bring glory to God the Father."

May God bless you with your families and friends and protect you by the precious blood of Jesus Christ our Lord and Savior.

THE POWER OF PRAYER

The Peace of the Lo0rd be always with you. THE POWER OF PRAYER.

At his baptism Jesus prayed and the heaven was opened.( Luke 3:21-22. "When all the people were being baptized , Jesus was baptized too. And as He was praying heaven was opened and the Holy Spirit descended on Him in bodily form like a dove. And a voice came from heaven : you are my Son , whom I love; withy you I am well pleased."

He prayed again before going to the cross and the Father spoke from heaven. ( John 12:27-28 "Now my soul is troubled , and what shall I say? ' Father , save me from this hour ' ? No, it was for this reason I came to this hour. 28. Father glorify your name!" Then a voice came from heave,, " I have glorified it , and I will glorify it again ."

Prayer is the only key that opens the gates of heaven.

James 5:16 says: "The prayer of a righteous person is powerful and effective."

May God help us to pray without ceasing in all situations..

Please, kindly, zoom in at 12:15 and join us for worship and hearing the word of God that could change your life forever.

May God bless you with your families and friends and protect you with by the precious blood of Jesus Christ our Lord and Savior.

GOD SO LOVED THE WORLD 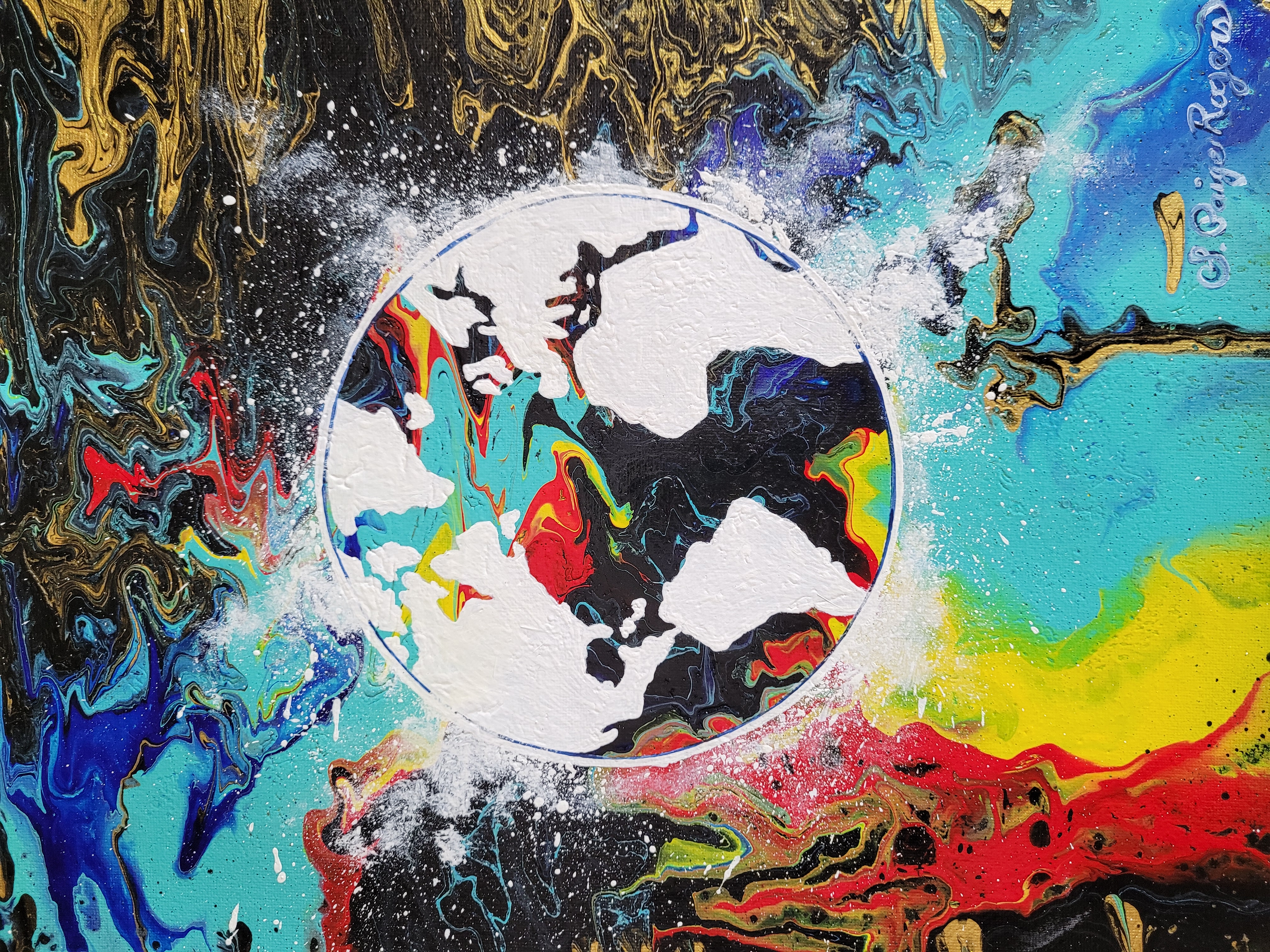 16 "For God so loved the world, that he gave his only begotten Son, that whosoever believeth in him should not perish, but have everlasting life."

The word "love" that John uses comes from the Greek word " Agape" which refers to God's unconditional love. It is God's nature to love " for God is love." ( 1 John 4:8).

God loves you unconditionally no matter who you are, where you come from, what color you are or what sin you might ever have committed.

We read in Romans 5:8: "But God demonstrates his own love for us in this While we were still sinners Christ died for us."

May God help us to love our family members and all other people unconditionally as God in Christ loves us. May God bless you with your family and friends and protect you by the precious blood of Jesus. Christ our Lord God and Savior.

After clearing the temple courts in Jerusalem, Jesus said, “Destroy this temple, and I will raise it again in three days.” (John 2:19).

No matter what people do to destroy the Temple of God, the Church, do not worry or fear, for God will raise His Temple again.

Jesus says: "And I tell you that you are Peter, and on this rock I will build my church, and the gates of Hades will not overcome it." (Mathew 16:18).

May God help us to stand firm in the midst of trials and temptations and to rust in Jesus the eternal Solid Rock of our Salvation.

What does our God listen to?

.."He has not despised or scorned

the suffering of the afflicted one;

he has not hidden his face from him

but has listened to his cry for help ."

God listens to the cry of his people.

Abraham cried to God for a child in Genesis 15: 2.

God listened to his cry and promised to give him a son:

and you will call him Isaac."

in his or her mother's womb and comes down to save those in distress.

The LORD God says to you:

11 "For I know the plans I have for you,” declares the Lord,

“plans to prosper you and not to harm you, plans to give you

hope and a future.

12 Then you will call on me and come and pray to me, and

I will listen to you.

in the name of Jesus Christ our Lord.